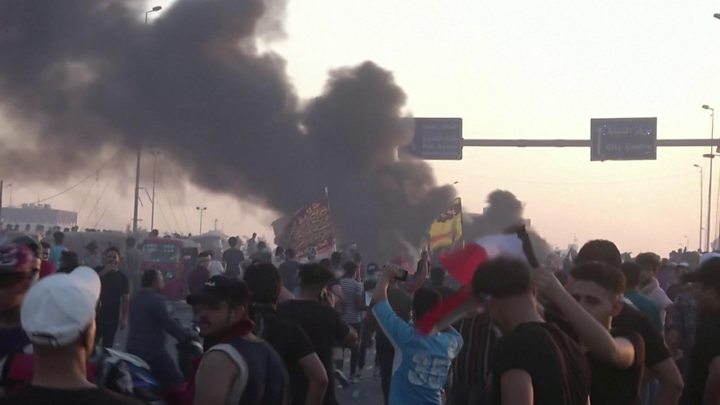 While in the past few years protests in Iraq have become common, the latest wave of unrest which has reportedly left over 100 people dead and thousands more injured could mark a dangerous turning point.

They specifically point to the way government appointments are made on the basis of sectarian or ethnic quotas (a system known as muhassasa), rather than on merit. Aggrieved Iraqis say this has allowed Shia, Kurdish, Sunni and other leaders to abuse public funds, enrich themselves and their followers and effectively pillage the country of its wealth with very little benefit to most citizens.

Coming to power last year, Prime Minister Adel Abdel Mahdi’s government of technocrats promised a solution to the corruption and the gap between the elite and ordinary citizens. Almost one year in, he has proven unable and unwilling to truly push back against the political class.

Instead, he has continued to cut deals with the same elite. After all, these leaders put him in power. And without a political party, this prime minister – a compromise candidate put in place by the two biggest competing Shia-led blocs – is at the behest of the political class more than any of his predecessors.

These protests have led to a particularly dangerous environment.

Some political figures who view themselves as the protectors of this system consider these protests to be existential threats. Unlike ever before in Baghdad, these leaders have turned to violence – using snipers and assassins – to target protesters and defend their system.

Last year, during protests in Basra, security forces similarly fired on demonstrators leading to a swift end as protesters retreated, fearing for their lives. This year, in Baghdad and elsewhere, the protectors of the system are applying the lessons of Basra 2018.

In the past, protests have usually erupted during the summer, when scorching heat and the government’s inability to provide basic services – such as electricity or water – reaches a boiling point and Iraqis hit the streets.

Ironically, this year, services have slightly improved, owed partly to heavy rainfall and a less intense summer. But reforms to the system remain a distant reality.

Last weekend’s demotion of Staff Lieutenant General Abdul-Wahab al-Saadi, who has become a legendary figure who led the fight against the Islamic State (IS) group, angered many Iraqis.

Sixteen years since regime change, Iraqis – and particularly the youth in the protests – are fed up with the façade of reform and with leaders who have learned to use the right words but are unwilling or unable to reform the system.

Yet, these protests are largely leaderless and lack any organisational structure. They are unlikely to lead to systemic change or revolution. Instead, the protectors of the system will double down by using violence, suppression, and coercion, to limit freedoms of association and speech.

This weekend’s attacks on media outlets in Baghdad and the cutting of the internet are glimpses into this new environment.

Therefore, while the protests and bloody response suggest a transformative moment, it may be towards an Iraq that is even more authoritarian.

Civilians evacuated from last IS enclave

Why countries face a dilemma over IS fighters’ children

Five things to know about the US-led strikes in Syria