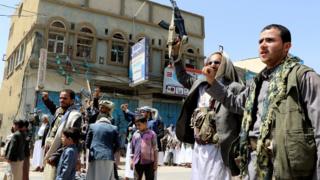 At last there is the chance of meaningful Yemen peace talks, so we’d be well advised to expect an intensification of violence.

How does that make any sense? It comes down to the desire of the warring parties to influence the negotiation, by making last minute gains.

This explains why Houthi rebels in the blockaded port of Hodeidah are today worried that the Saudi-led coalition is about to launch an assault against them.

There were reports on Thursday that 10,000 troops were moving in that direction, in an apparent effort to capture or threaten the entry point for much of Yemen’s food and humanitarian aid.

To anyone who has covered conflict such steps are depressingly familiar.

Military commanders often see the approach of talks – it’s been suggested that the Yemeni warring parties will meet in Sweden later this month – as their last chance to capture new ground, while simultaneously changing the equation at the peace table.

Covering the Balkan wars back in the 1990s, we witnessed a wave violence touched off by the putative Vance-Owen peace plan.

It envisaged dividing Bosnia-Herzegovina into cantons, each with a dominant group – so warlords began ‘ethnic cleansing’ their territory in anticipation.

During the Syrian civil war, with its myriad rebel factions and local power balances, the carrots of humanitarian aid or ‘demilitarisation agreements’ have been used interchangeably with the stick of increased bombing or actual assault.

The arrival of relative peace in many of the areas cleared by President Assad’s forces, was proceeded by a hideous escalation of violence.

In its recent campaigns, from an assault crossing of the Suez Canal during the 1973 war, to airborne landings in Lebanon in 2006, or a ground push into Gaza in 2009, a last minute drive, once peace talks are in the air, has been a hallmark of Israel’s military operations.

So what does this mean in the Yemeni context? The Saudi coalition has been seeking for months to take Hodeidah.

Given the slow pace of its operations to date, it’s open to question whether they can actually seize it in the weeks before any talks begin, but they can add pressure, even while the US calls for a ceasefire.

If they are able to make gains on ground that would mean their heavy guns ‘overlooked’ the harbour, then they might hope to reap dividends in Sweden without actually having to go through with a bloody assault.

From their side the Houthis know that they will come under international pressure in Sweden to take some confidence building steps of their own.

They have used long-range missiles to target Saudi population centres and may well have to pull these back, away from the border with the Kingdom, as part of peacemaking efforts.

In the coming days, Houthi commanders might be tempted to fire off some more of these missiles while they still can. Doing so might also provide a means of retaliation if their own casualties in Hodeidah start to rise.

It is possible of course that the suffering may increase, and the famine stalking the country becomes even more intense, without any concrete gains in the Swedish talks.

But the one thing we can say, seeing current diplomatic and military developments, is that both sides seem to believe that they may have entered some sort of end game.

Is a new Arab Spring unfolding in the Middle East?

Israel hits back at critics after air strikes