JERUSALEM — Israelis were confronted with a rude new reality on Friday: a prime minister running for re-election while facing indictment for corruption.

While there were hints that Prime Minister Benjamin Netanyahu could be losing support, his right-wing allies appeared to be sticking with him and no one was foolish enough to write off a politician who still retains strong support and has shown Houdini-like skill in escaping seemingly impossible jams before.

The only certainty was that Israel was in for a wild ride between now and the April 9 ballot, with analysts predicting that the country’s political scene — loud, fractious and heated at the best of times — would become only more divisive as Mr. Netanyahu, who is seeking a fourth consecutive term, fights for his political life.

“He splits the nation,” said Yehuda Ben Meir, an expert in public opinion at the Institute for National Security Studies in Tel Aviv. “His are the politics of polarization and exaggeration. If he got any more polarizing he’d fall off the planet.”

[The cases against Mr. Netanyahu, explained.]

Mr. Netanyahu, who has dominated the Israeli political scene for a decade, faces a serious challenge from a newcomer, Benny Gantz, a retired military chief and leader of the new, centrist Blue and White party.

After the announcement by the attorney general, Avichai Mandelblit, on Thursday that he intends to indict Mr. Netanyahu on charges of bribery, fraud and breach of trust, polls have pointed to a growing shift away from Mr. Netanyahu and his conservative Likud party and toward Mr. Gantz, whose military record could inoculate him against Mr. Netanyahu’s strongest line of attack, that he is the only one who can protect Israel’s security.

Israel Hayom, the free newspaper sympathetic to Mr. Netanyahu and financed by Sheldon Adelson, the American casino billionaire and a longtime patron, buried its own poll in the Friday edition on page 19, after it put Blue and White a hefty nine seats ahead of Likud. 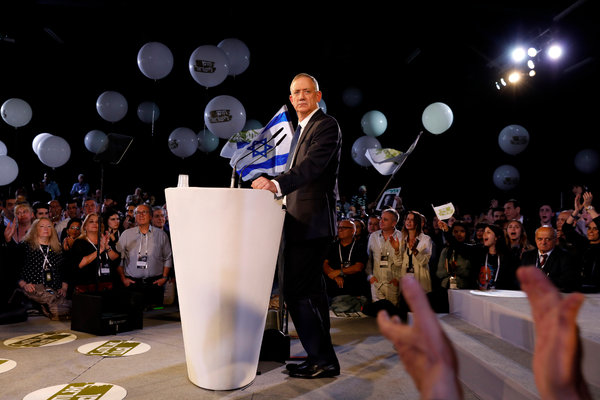 If anything, experts said, Israel Hayom’s polls have tended to be skewed in Mr. Netanyahu’s favor.

Still, it may be premature to measure the political effect of the attorney general’s announcement.

“It’s too early for the polls to matter,” Mr. Ben Meir said. “It takes time for people to react.”

The details of three separate, but interconnected, corruption cases in which Mr. Netanyahu is a suspect were spread over a 57-page document released by the Justice Ministry on Thursday.

It included a chart with a monthly breakdown of the hundreds of thousands of dollars worth of cigars and Champagne supplied to the Netanyahus by a Hollywood producer and a millionaire businessman; back-room dealings with the publisher of a rival newspaper, Yediot Ahronot; and a dinner with an Israeli telecommunications mogul that led to a yearslong “give and take” relationship, as Mr. Mandelblit put it, with Mr. Netanyahu allegedly exchanging lucrative regulatory favors for positive coverage.

But a deluge of leaks from the investigations over the past few months meant that for most Israelis, there was little shock value in the official revelations.

Mr. Netanyahu, who denies any wrongdoing, went about his business as usual on Friday, hosting the president of Liberia, a former professional soccer player. “I told him that the next time he came we might play some football,” a seemingly jovial and relaxed Mr. Netanyahu said in a video.

He also kept up his political invective, urging his supporters on Twitter, “Do not let the witch hunt against me confuse you.” Returning to a familiar theme, he denounced Mr. Gantz and his party as the “weak left” and said it would have to rely on the support of Arab parties to prevent a right-wing coalition.

In the morning, public radio moved on from the investigations to discuss the problem of traumatized Israeli war veterans. People shopped for the sabbath.

There was no reason to panic with the election still nearly 40 days off.

“Forty days in an election season is the equivalent of two years in normal time,” wrote Amit Segal, an Israeli political analyst, in his weekly column in Friday’s Yediot Ahronot newspaper. “Until then, the agenda should change several times.”

“No one’s jaw dropped yesterday,” he added, quoting the words of a popular Israeli song, “Lovers will love, haters will hate.”

Opposition leaders have called on Mr. Netanyahu to resign, and so far, his right-wing allies appeared to still see him as their best bet to return to government. Most of his current coalition partners, and even a would-be successor within his Likud party, issued statements of support, saying the prime minister, like anybody else, deserved to be treated as innocent until proven guilty.

Ayelet Frish, an independent strategic consultant, said there was a perceptible shift among some of the “soft right” away from Mr. Netanyahu’s Likud to other parties. Whether they return home by April, she said, largely depends on Mr. Netanyahu.

“Netanyahu is a champion at the negative campaign,” she said, “but it takes time to penetrate. We will have to wait until a minute before the elections.”

In the 2015 election, Mr. Netanyahu was widely believed to have ensured a last-minute victory by scaring Jewish voters with a video demonizing Arab voters, saying left-wingers were busing them to the voting booths “in droves.” Palestinian-Arab citizens make up more than 20 percent of Israel’s population.

The announcement on Thursday was an interim step in the prosecution. Mr. Netanyahu is now entitled to a hearing to challenge the charges before a formal indictment can be handed down.

He insists that the hearing could overturn the attorney general’s decision and quash the cases against him, but his lawyers will need at least six months to prepare, experts say, and it is unlikely to take place before the election.

Israeli criminal lawyers say that while the hearings often end in reduced charges or closed cases, that was unlikely in Mr. Netanyahu’s case. The investigation was closely supervised by the highest legal authorities and Mr. Mandelblit’s charges were conservative. He recommended the most serious charge, bribery, in only one case, while the state attorney’s office recommended bribery charges in all three.

That makes a formal indictment all but certain. Whether Mr. Netanyahu will still be prime minister by then is not.