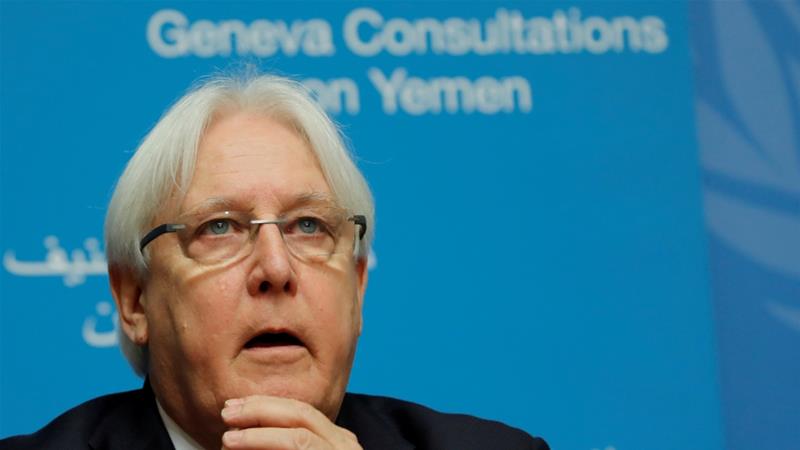 The United Nation’s envoy to Yemen, Martin Griffiths, is no longer aiming to convene the country’s warring parties for peace talks this month and will instead try to bring them together by the end of the year, according to a UN spokesperson.

Addressing reporters on Thursday, UN spokesperson Farhan Haq said Griffiths’ goal was to hold consultations before the end of the year.

“There is always different challenges to bringing the parties together,” Haq said.

“What we’re trying to do is clear up any issues so that we can get a successful round of talks as soon as possible.”

Griffiths, who is due to brief the Security Council on November 16, is trying to salvage the peace talks that collapsed in September.

He said in a statement last week that he hoped to bring the parties to the negotiating table within a month.

The conflict in Yemen, the Arab world’s poorest country and home to an estimated 28 million people, began with the 2014 takeover of the capital, Sanaa, by Houthi rebels, who toppled the internationally recognised government of President Abd-Rabbu Mansour Hadi.

Concerned by the rise of Houthis, believed to be backed by Iran, a US-backed Saudi-UAE military coalition intervened in 2015 with a massive air campaign aimed at reinstalling Hadi’s government.

According to the UN, at least 10,000 people have been killed since the coalition entered the conflict. The death toll has not been updated in years, however, and is likely to be far higher.

Last week, UN Secretary-General Antonio Guterres demanded an “immediate” halt to the fighting, warning that the country stands on a “precipice” and could face the world’s “worst famine” for decades if violence continues unabated.

About 22 million Yemenis are in need of humanitarian assistance, according to the UN.

International powers including the US and Britain have also stepped up calls for an end to the nearly four-year war in recent weeks.

The calls came after an earlier attempt to hold peace talks in the Swiss city of Geneva in September was abandoned when Houthi representatives refused to attend, saying the UN had failed to meet the group’s pre-summit demands.

Following the collapse of the talks, which would have been the first of their kind in nearly two years, the coalition announced it was relaunching an assault on Houthi-held Hodeidah, a strategically important Red Sea port city.

“What we’re trying to do is clear up any issues so that we can get a successful round of talks as soon as possible,” he added.

On Thursday, dozens of combatants were killed as pro-government forces closed in on rebel forces in the heart of Hodeidah, hospital sources said.

Medics at hospitals inside the city reported 47 rebels had been killed in overnight ground fighting and air raids by a Saudi-UAE coalition supporting the government.

Sources at hospitals in government-held areas on the outskirts said 11 soldiers had also been killed.

Aid agencies have long warned that fighting in Hodeidah, the entry point for the bulk of Yemen’s commercial imports and aid supplies, risks escalating the country’s dire humanitarian crisis.