Several Democratic presidential candidates assailed Attorney General William P. Barr on Thursday for holding a news conference before the release of the special counsel’s report, arguing that it was an attempt to pre-emptively protect President Trump from any potentially damaging findings.

Senator Elizabeth Warren of Massachusetts called Mr. Barr’s Thursday morning news conference “a disgrace” and said he had been “acting as if he’s the personal attorney and publicist for the president.”

Senator Kamala Harris of California said Mr. Barr’s media briefing had been “filled with political spin and propaganda” that “should concern us all.”

Mr. Barr “acted more like the president’s defense attorney than our nation’s attorney general,” Ms. Harris said. And like several other Democrats competing for the chance to run against President Trump in 2020, she demanded that Mr. Barr deliver the full report to Congress along with all of the investigative materials that informed its conclusions.

The appraisal of Mr. Barr’s performance came as lawmakers and the public at large began to read the redacted version of the report by the special counsel, Robert S. Mueller III, who investigated Russian interference in the 2016 election, any ties between the Russian effort and the Trump campaign and possible obstruction of justice by Mr. Trump. That version of the report was published online around 11 a.m. Thursday, about 90 minutes after Mr. Barr offered a strong defense of Mr. Trump at his news conference. The report had not been made public before Mr. Barr spoke with reporters.

[Read our live updates on the report and the reaction to it here.]

Several of the Democratic presidential candidates, including Ms. Warren and Ms. Harris, who were unsatisfied with Mr. Barr’s remarks, also called for Mr. Mueller himself to testify about his work in Congress.

Senator Amy Klobuchar of Minnesota said in a video on Twitter that the public wanted to hear from Mr. Mueller directly. She called on him to testify before the Senate Judiciary Committee; she is a member of the committee, as is Ms. Harris and Senator Cory Booker of New Jersey, who are among the 18 Democrats running for president. 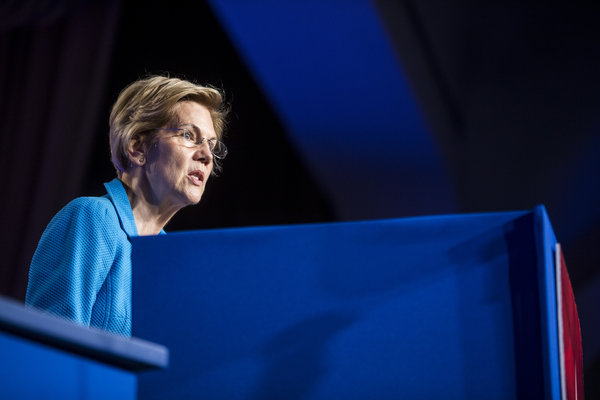 “We want to hear from Director Mueller himself,” Ms. Klobuchar said. “He should be able to give us his own views of what happened here so we can answer questions. He’s the one that conducted this major investigation and he’s the one, not Attorney General Barr, that should answer the questions of America.”

Senator Kirsten Gillibrand of New York echoed her colleagues’ requests and in other tweets called Mr. Barr’s news conference “outrageous” and “a farce.”

Ms. Gillibrand said she was “deeply disturbed” that Mr. Barr had briefed the White House on the report’s findings before its public disclosure.

About an hour after the report was released, Representative Eric Swalwell of California called on Mr. Barr to resign, citing what he said was misconduct related to the Mueller report.

“You can be the president’s defense attorney or America’s attorney general, but you can’t be both,” Mr. Swalwell said in a statement.

Representative Tim Ryan of Ohio apparently had time to flip through the more than 400-page report by Thursday afternoon, and offered a sarcastic, if less formal, response.

Mr. Ryan tweeted an image of one page of the report that had mostly been blacked out with redactions, and offered a quip about how Mr. Barr had characterized his office’s editing of the document.