Home » Politics » 2020 Democrats Want to Build a Movement, Not a Traditional Campaign

Alexandra Rojas was shocked. So was Waleed Shahid.

The pair, two vocal leaders of Justice Democrats, the advocacy group whose uncompromising style has made it a nuisance among Washington traditionalists, had a meeting request from aides to Senator Elizabeth Warren, who was fresh into her presidential campaign. As Ms. Warren sought to push the party to the left by proposing expansive liberal policy ideas, it was clear her team was prepared to seek counsel from leading organizations that did the same.

“They want us in their court,” Ms. Rojas said. “They know that if they want to win, they need to have the support from the grass-roots energy.”

Ms. Warren’s willingness to look outside the traditional pool of political aides for counsel underscores the extent to which activism and ideology are shaping the makeup of campaign staffs for Democratic candidates, even at the highest levels. Neither Ms. Rojas nor Mr. Shahid received a job offer, but in a crowded field where candidates are looking to stand out, activists fluent in the language of social movements are gaining value as important allies.

Julián Castro hired as his campaign manager Maya Rupert, a campaign novice who made her name in organizing with the Center for Reproductive Rights and the National Center for Lesbian Rights. Senator Bernie Sanders has expanded his close-knit group of strategists and tapped Faiz Shakir, the former political director for the American Civil Liberties Union, to run his new-look presidential campaign, which announced last week its staff would become the first presidential campaign work force to be unionized. .

As the primary process kicks into full swing, some Democrats are bypassing the kind of experienced Washington “wiseguys” who operated in the caldron of beltway politics — famous strategists like David Axelrod, James Carville and, more recently, Robby Mook. Instead, campaigns are increasingly filling senior positions with a new generation of activist-driven operatives, whose political formation took place in grass-roots movements.

The shift has resulted in greater staff diversity than in previous cycles, but it has also influenced strategy, according to campaign officials. New voices are joining with election-cycle veterans to bring fresh ideas and political strategies to the presidential stage. 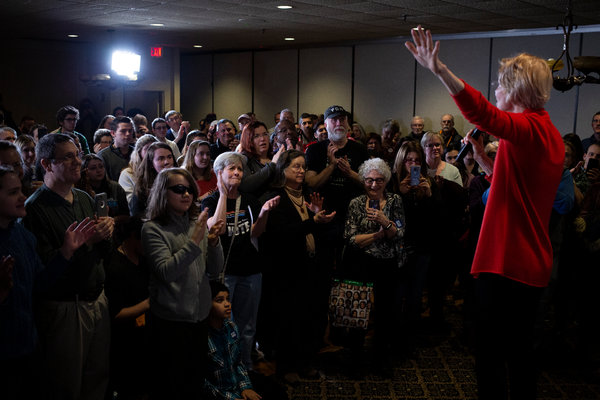 Mr. Castro, for instance, plans to diverge from the traditional early primary state road map in favor of a tour of all 50 states. Ms. Warren has pledged to eschew all private fund-raising, an unheard-of step in presidential politics that was fueled by her campaign’s chief architect, Dan Geldon, who shares Ms. Warren’s distaste for Wall Street and a willingness to take political risks.

[Sign up for our politics newsletter and join our conversation about the 2020 presidential race.]

Mr. Sanders is emphasizing his personal biography more, and engaging in more explicit discussions of racial inequality. Senator Kamala Harris, the California Democrat who has often relied on a trusted group of California advisers, has taken pains to find senior staffers with grass-roots credentials as she attempts to fashion herself as the candidate “for the people.”

“The shifts that we’re seeing in the Democratic Party are a lot of folks demanding that their leadership take ideas that have been considered on the fringe and push them to the center,” said Ms. Rupert, Mr. Castro’s campaign manager. “And that’s the way movements operate.”

Mr. Castro’s campaign is also paying its interns a $15 minimum wage and said it would support any effort among staff to form a union.

Kelly Dietrich, the longtime Democratic consultant, said the surge in Democratic voter enthusiasm has been coupled with a behind-the-scenes shift, as more issues-driven activists become interested in electoral politics.

[Check out the Democratic field with our candidate tracker.]

“We’re seeing a lot more people across the spectrum, both in terms of diversity and political agenda, step forward and want to make change,” said Mr. Dietrich, who founded a campaign training organization called the National Democratic Training Committee. They are “fed up or scared, they are frustrated, and are ready to fight back.”

The Democratic Party needs to bring in these activists, Mr. Dietrich said, “so that five years, 10 years, 15 years down the road, this is the norm.”

The shift is indicative of a growing realization among many Democrats that the party’s most fervent energy resides on its left flank. In the wide-open and ever-growing primary field, campaigns are eager to add a perspective that can help them capitalize on the mass mobilization and anti-Trump “resistance” efforts that have proved so successful for Democrats in the past two years.

Last year’s midterm elections saw Democrats sweep to power in the House, and the most popular members of the party’s new class are the women of color who pushed the party even further left, empowered by groups including Justice Democrats.

Rather than fight that new energy, some 2020 hopefuls have decided to court it. Richard McDaniel, who helped engineer the surprise victory for Senator Doug Jones of Alabama in 2017, joined Ms. Warren’s campaign as field director. Rebecca Pearcey, formerly of the Democratic Legislative Campaign Committee, an organization that works to elect Democrats to state legislatures, was a surprise choice for Ms. Warren’s national political director.

In terms of diversity, Ms. Harris has led the way, with 12 senior staffers who are women of color, out of 17 total. This includes Julie Chavez Rodriguez, the activist and granddaughter of legendary labor leader Cesar Chavez. Ms. Rodriguez was instrumental in helping Ms. Harris secure the endorsement of Dolores Huerta, the California labor leader who, along with Mr. Chavez, founded the United Farm Workers.

Another member of Ms. Harris’s team is Laphonza Butler, the former president of the Service Employees International Union in California. She said activists are more likely to see electoral politics as valuable in this era, because of the moral urgency that President Trump’s administration has instilled among liberals.

“We’re asking ourselves these really existential questions about what are we going to be as a nation,” said Ms. Butler, who is a senior adviser to Ms. Harris. “And I had to choose how to best continue the work that I’ve been doing as an advocate for workers and a voice for workers — and working for Senator Harris is a continuation of that.”

“The rule book went out the door with President Obama, kind of, how you engage communities,” Mr. McDaniel said. “It’s old-school tactics, but you need to have a new mind frame of thinking.”

But some have warned that the embracing of activists could be more about optics than a shift in political power, and that the bulk of decision making will still reside with the political strategy firms that have long been influential in electoral politics.

Ms. Morales Rocketto urged the campaigns to see employees from non-Washington backgrounds as more than just an attempt to “check boxes.” She said one current presidential campaign explicitly told her recently that they were calling her because they needed a “senior Latina with movement credibility.”

“It would be a damn shame if all they did was catch up to the optics,” she added.

Heather McGhee, the former president of the progressive advocacy group Demos, who has not signed onto a 2020 campaign, said she has been contacted by surrogates for Ms. Harris and Senator Cory Booker of New Jersey — though she remains a close ally of Ms. Warren. Her counsel was particularly valued after Demos published a much-lauded 2018 paper on how candidates should fuse analysis of race and class, a key focus of the progressive message.

“To see the soul of the new Democratic Party, you can look to the candidate’s advisers and ask whether they came from activism or professional consultant class,” Ms. McGhee said, implying that more now come from grass-roots backgrounds and can inject the party with new ideas.

One such idea was on display when Ms. Harris held a recent campaign rally in Nevada. During the event, aides passed out headsets to Spanish-speaking residents so that the candidate’s words could be translated in real-time, a move widely praised as an effective way to reach new voters in the immigrant-rich West.

It came from Ms. Butler, who said it was a “no-brainer” from her time in union organizing.