The demise of the For the People Act — the far-reaching voting rights bill that Republicans blocked in the Senate on Tuesday — will come as a crushing blow to progressives and reformers, who have portrayed the law as an essential tool for saving democracy.

But it was a flawed bill that had little chance of testing the limits of what if anything is still possible in Washington. Voting rights activists and Democratic lawmakers may even find that the collapse of this law opens up more plausible, if still highly unlikely, paths to reform.

The law, known as H.R. 1 or S. 1, was full of hot-button measures — from public financing of elections to national mail voting — that were only tangentially related to safeguarding democracy, and all but ensured its failure in the Senate. Its supporters insisted the law should set the floor for voting rights; in truth, it set the floor at the ceiling, by guaranteeing a level of voting access that would be difficult to surpass.

At the same time, reformers did not add provisions to tackle the most insidious and serious threat to democracy: election subversion, where partisan election officials might use their powers to overturn electoral outcomes.

Instead, it focused on the serious but less urgent issues that animated reformers at the time the bill was first proposed in 2019: allegations of corruption in the Trump administration, the rise of so-called dark money in the aftermath of the Supreme Court’s decision in Citizens United, or the spate of voter identification laws passed in the aftermath of President Barack Obama’s election victories.

Even a cursory look at the effort by former President Donald J. Trump to subvert the 2020 election revealed a number of vulnerabilities in the electoral system, from the risk that a partisan election administrator might simply refuse to certify an unfavorable election result to the possibility that a vice president might choose not to count a certified electoral slate. None of those vulnerabilities were addressed.

Those concerns have only escalated over the last several months as Republicans have advanced bills that not only imposed new limits on voting, but also afforded the G.O.P. greater control over election administration. The new powers include the ability to strip secretaries of state of some of their authority and remove members of local election boards. The New York Times reported over the weekend how some Democrats on local boards in Georgia, including people of color, were losing their positions.

It’s true that the 2020 election and Mr. Trump’s unprecedented attempt to undermine it revealed the fragility of American democracy in different and more fundamental ways than even the most perspicacious legislator could have anticipated. Originally, the bill was seen as a “political statement,” a progressive “wish list” or a “messaging bill,” not as the basis for a realistic legislative effort.

It was not designed to appeal to the moderate Senate Democrats, who progressives nonetheless hoped would eliminate the filibuster even as they insisted on different proposals and a bipartisan approach.

Yet oddly, the bill was so far from passage that reformers still have cause for some semblance of hope. Nearly every stone was left unturned.

As a result, many other avenues for reform remain to be pursued. None seem likely to be enacted in today’s political climate. All are more plausible than the bill that died in the Senate on Tuesday.

One of those avenues emerged in the final days of the push for H.R. 1: a grand bargain, like the one recently suggested by Joe Manchin III, the moderate Democratic senator from West Virginia who provoked outrage among progressives when he said he would oppose the bill in its current form. 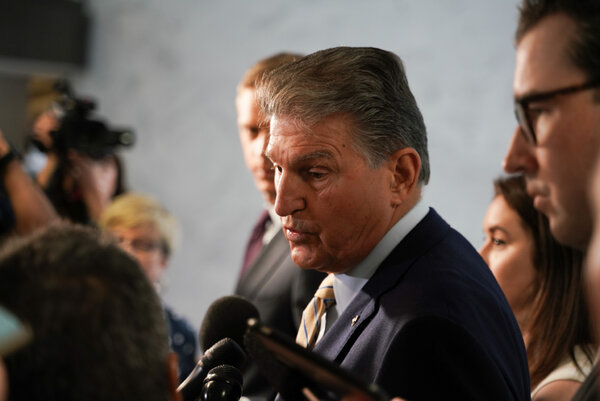 The Manchin compromise resembles H.R. 1 in crucial ways. It does not address election subversion any more than H.R. 1 does. And it still seeks sweeping changes to voting, ethics, campaign finance and redistricting law. But it offers Republicans a national voter identification requirement, while relenting on many of the provisions that provoke the most intense Republican opposition.

More generally, it is hard to imagine how Republicans could be enticed to accept stringent limits on gerrymandering, given the lopsided partisan consequences of such a ban.

But the strategy behind the Manchin proposal could nonetheless serve as a basis for serious legislative efforts: Democrats can offer Republicans provisions they actually want on voting, like new photo identification requirements, and see what that buys them.

The willingness of Ms. Abrams, who leads the Georgia-based voting rights group Fair Fight, to support the Manchin compromise, despite its embrace of voter ID measures — an archetypal voter suppression provision — suggests that there may be room to explore options that might attract support from Republicans and haven’t previously been considered.

Another avenue is a version of the John Lewis Voting Rights Act, which would again subject Southern states to obtain federal clearance before making changes to their voting system — a requirement that a 2013 Supreme Court decision gutted.

The Battle Over Voting Rights

After former President Donald J. Trump returned in recent months to making false claims that the 2020 election was stolen from him, Republican lawmakers in many states have marched ahead to pass laws making it harder to vote and change how elections are run, frustrating Democrats and even some election officials in their own party.

‘Takes two to tango!’ EU hits back after Boris Johnson says Brussels MUST back down