With four weeks left in President Trump’s term, he is at perhaps his most unleashed — and, as events of the last few days have demonstrated, at the most unpredictable point in his presidency.

He remains the most powerful person in the world, yet he is focused on the one area in which he is powerless to get what he wants: a way to avoid leaving office as a loser.

He spends his days flailing for any hope, if not of actually reversing the outcome of the election then at least of building a coherent case that he was robbed of a second term.

When he has emerged from his relative isolation in recent days, it has been to suggest out of the blue that he would try to blow up the bipartisan stimulus package, driving a wedge through his party in the process, and to grant clemency to a raft of allies and supporters, mostly outside the normal Justice Department process.

He has otherwise sequestered himself in the White House, playing host to a cast of conspiracy theorists and hard-core supporters who traffic in ideas like challenging the election’s outcome in Congress and even invoking martial law, seeking to give some of them government jobs.

He is almost entirely disengaged from leading the nation even as Americans are being felled by the coronavirus at record rates. Faced with an aggressive cyberassault almost surely carried out by Russia, his response, to the degree that he has had one, has been to downplay the damage and to contradict his own top officials by suggesting that the culprit might actually have been China. He played almost no role in negotiating the stimulus bill that just passed Congress before working to disrupt it at the last minute.

It is not clear that Mr. Trump’s latest behavior is anything other than a temper tantrum, attention-seeking or a form of therapy for the man who controls a nuclear arsenal — though one alternative, if charitable, view is that it is strategic groundwork for a grievance-filled run in 2024.

If nothing else, it will make for an especially anxious next 27 days in Washington.

This article is based on interviews with more than a dozen current and former administration officials, Republicans and allies of the president.

Most of his advisers believe Mr. Trump will depart the White House for a final time by Jan. 20. The pardons he announced Tuesday night suggest he is comfortable using his powers aggressively until then. But how far he will go to subvert the election results, actually refuse to leave the White House or to unleash a wave of unilateral policy decisions in his final weeks is hard to discern.

Still, his erratic behavior and detachment from his duties have even some of his most loyal aides and advisers deeply concerned.

For the moment, Mr. Trump has told advisers he’s willing to stop listening to Sidney Powell, the lawyer who has appealed to him by peddling a conspiracy theory about the election, and people like Patrick Byrne, the former chief executive of Overstock.com, who was present for a wild, nearly five-hour meeting in the Oval Office and then the presidential residence last Friday. 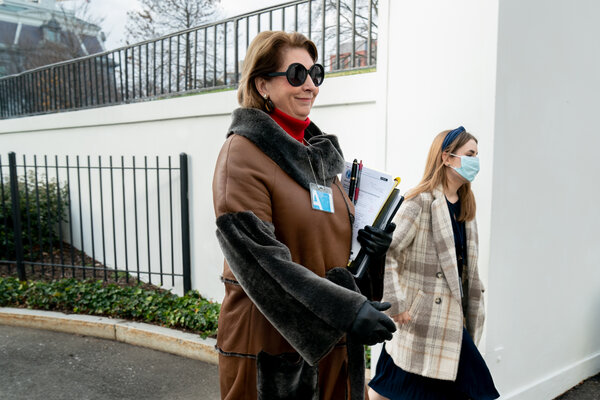 But current advisers have described a daily struggle to keep Mr. Trump from giving in to his impulse to listen to those who are telling him what he wants to hear. And former advisers say the most worrisome issue is the gradual disappearance of the core group of West Wing aides who, often working in unison, consistently could get him to turn away from risky, legally dubious and dangerous ideas.

“The number of people who are telling him things he doesn’t want to hear has diminished,” said his former national security adviser, John R. Bolton, who had a very public parting of ways with Mr. Trump and who has been vocal in objecting to the president’s thrashing against his electoral loss.

Mr. Trump has turned to aides like Peter Navarro, a trade adviser who has been trying to gather evidence of election fraud to bolster his boss’s claims. And he is listening to Republicans who insist that Vice President Mike Pence could help sway the election during the normally routine process of ratifying the election early next month, despite the fact that it isn’t realistically possible.

Among Republicans on Capitol Hill, there is talk of clamping down on any of his supporters who might try to disrupt that process, a possibility made real by the president’s importuning of Senator-elect Tommy Tuberville of Alabama to gum up the works.

Yet it is not certain that Mr. Tuberville will carry through the president’s desires, and even he if does, there is the possibility that Senator Mitch McConnell of Kentucky, the Republican majority leader, could step in to prevent such a move. Mr. McConnell has already urged his caucus not to raise objections when the results are certified, because it would force others to publicly vote against the president.

Even in the best of times, Mr. Trump has searched for — and required — reinforcements from people outside the White House in support of whatever his aides will go along with.

But in the White House, Mr. Trump is turning on his closest of allies. He has complained to allies that Mr. Pence, who has been mocked for unflinching loyalty over the last four years, should be doing more to defend him. And he is angry that Mr. McConnell has recognized Mr. Biden as the winner of the election.

This week, Mr. Trump had an assistant send a chart featuring the timing of his endorsement of Mr. McConnell overlaid on polling data to claim he was responsible for Mr. McConnell winning re-election this year — a claim political professionals would dispute — and to suggest the majority leader is ungrateful for his help.

And on Tuesday evening, Mr. Trump tweeted a broadside against Senate leadership by attacking Mr. McConnell and the majority whip, Senator John Thune, of South Dakota, who had said any challenge to ratification of the election results would go down like a “shot dog.”

At the Justice Department, Attorney General William P. Barr’s public and emphatic rejection on Monday of the need for special counsels to investigate election fraud and Hunter Biden appeared intended in part to insulate his short-term successor, Jeffrey A. Rosen, from any further pressure on those fronts by the president.

Privately, allies who have stood by as Mr. Trump has weeded out others through loyalty purges, and who have dismissed criticisms that the president has authoritarian tendencies, are expressing concern about the next four weeks.

Mr. Barr, whose last day in the job is Wednesday, has told associates he had been alarmed by Mr. Trump’s behavior in recent weeks. Other advisers have privately said they feel worn out and are looking forward to the end of the term.

For those who remain, the days have been bleak endeavors during which government workers are forced to spend time either executing the president’s demand that election fraud be proven, or incurring his wrath.

As Axios reported, Pat A. Cipollone, the White House counsel who has implored Mr. Trump to steer clear of proposed maneuvers like having federal officials seize control of voting machines to inspect them, has become a target of the president’s anger.

Mr. Trump has characterized Mr. Cipollone derisively, invoking his own mentor, the infamously ruthless and unscrupulous lawyer Roy Cohn, as what a White House counsel should aspire to be like.

The White House chief of staff, Mark Meadows, has objected to some of the president’s desires, like appointing Ms. Powell as special counsel examining voter fraud, but he also made a trip to Georgia on Tuesday to investigate ballot safety measures. Mr. Meadows, a former House member, has also leaned into the effort by his old colleagues to challenge the vote in Congress, something that might keep the president from engaging further with Ms. Powell, but which many Republicans consider destructive to their party.

Other advisers have simply absented themselves at a time when the president is particularly unsteady.

The president’s son-in-law and senior adviser, Jared Kushner, has been out of the country for significant amounts of time since Election Day, traveling through the Middle East for deals that burnish his own credentials. He has responded to people seeking his help with Mr. Trump by saying that the president is his children’s grandfather, implying there are limits to what he can do to help.

Mr. Trump has spent his days watching television, calling Republicans in search of advice on how to challenge the electoral outcome and urging them to defend him on television. As always, he turns to Twitter for boosts of support and to vent his anger. He has not gone golfing since the weather has turned colder, and is cloistered in the White House, shuffling from the residence to the Oval Office.

Many Trump advisers hope that his planned trip to his private club in West Palm Beach, Fla., Mar-a-Lago, will give him a change of scenery and a change of perspective. He is scheduled to leave on Wednesday and stay through the New Year holiday, although some aides said he still might decide against it.

Off to the races: Key dates on the 2019-20 U.S. presidential election calendar