WASHINGTON — As Republican state lawmakers around the nation are working furiously to enact laws making it harder to vote, the Supreme Court on Tuesday will hear its most important election case in almost a decade, one that will determine what sort of judicial scrutiny those restrictions will face.

The case centers on a crucial remaining provision of the Voting Rights Act, which prohibits voting practices that discriminate on the basis of race. Civil rights groups are nervous that the court, now with a six-justice conservative majority, will use the opportunity to render that provision, Section 2, toothless.

The provision has taken on greater importance in election disputes since 2013, when the court effectively struck down the heart of the 1965 law, its Section 5, which required prior federal approval of changes to voting procedures in parts of the country with a history of racial and other discrimination.

But Chief Justice John G. Roberts’s majority opinion in the 5-to-4 decision, Shelby County v. Holder, said Section 2 would remain in place to protect voting rights by allowing litigation after the fact.

“Section 2 is permanent, applies nationwide and is not at issue in this case,” he wrote.

But it is more than a little opaque, and the Supreme Court has never considered how it applies to voting restrictions.

“It would be just really out of step for what this country needs right now for the Supreme Court to weaken or limit Section 2,” said Myrna Pérez, a lawyer with the Brennan Center for Justice, which submitted a brief supporting the challengers.

Civil rights lawyers have a particular reason to be wary of Chief Justice Roberts. When he was a young lawyer in the Reagan administration, he unsuccessfully worked to oppose the expansion of Section 2, which had initially covered only intentional discrimination, to address practices that had discriminatory results.

The Arizona case concerns two kinds of voting restrictions. One requires election officials to discard ballots cast at the wrong precinct. The other makes it a crime for campaign workers, community activists and most other people to collect ballots for delivery to polling places, a practice critics call “ballot harvesting.” The law makes exceptions for family members, caregivers and election officials.

“I can’t believe the court would strike down common-sense election integrity measures,” Mark Brnovich, the state’s attorney general, said in an interview. In his brief, he wrote that “a majority of states require in-precinct voting, and about 20 states limit ballot collection.”

Whether the particular restrictions challenged in the case should survive is in some ways not the central issue. The Biden administration, for instance, told the justices in an unusual letter two weeks ago that the Arizona measures did not violate Section 2. But the letter disavowed the Trump administration’s interpretation of Section 2, which would limit its availability to test the lawfulness of all sorts of voting restrictions.

Section 2 bars any voting procedure that “results in a denial or abridgment of the right of any citizen of the United States to vote on account of race.” That happens, the provision goes on, when, “based on the totality of circumstances,” racial minorities “have less opportunity than other members of the electorate to participate in the political process and to elect representatives of their choice.”

Dissenting in the Shelby County case, Justice Ruth Bader Ginsburg said Section 2 was not nearly as valuable as Section 5. 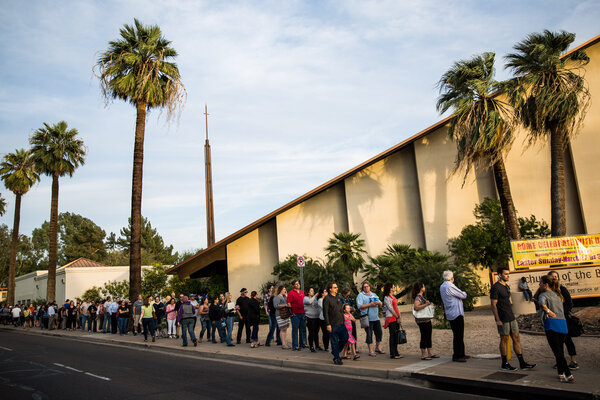 “Litigation occurs only after the fact, when the illegal voting scheme has already been put in place and individuals have been elected pursuant to it, thereby gaining the advantages of incumbency,” she wrote. “An illegal scheme might be in place for several election cycles before a Section 2 plaintiff can gather sufficient evidence to challenge it. And litigation places a heavy financial burden on minority voters.”

While Section 5 was available, Section 2 was used mostly in redistricting cases, where the question was whether voting maps had unlawfully diluted minority voting power. Its role in testing restrictions on the denial of the right to vote itself has been subject to much less attention.

But Paul M. Smith, a lawyer with the Campaign Legal Center, which submitted a brief supporting the challengers, said lower courts had worked out a sensible framework to identify restrictions that violate Section 2.

“It is not enough that a rule has a racially disparate impact,” he said. “That disparity must be related to, and explained by, the history of discrimination in the jurisdiction. Our hope is that the court will recognize the importance of maintaining this workable test, which plays an essential role in reining in laws that operate to burden voting by Blacks or Latinos.”

The two sets of lawyers defending the measures in Arizona did not agree on what standard the Supreme Court should adopt to sustain the challenged restrictions. Mr. Brnovich, the state attorney general, said the disparate effect on minority voters must be substantial and caused by the challenged practice rather than some other factor. Lawyers for the Arizona Republican Party took a harder line, saying that race-neutral election regulations that impose ordinary burdens on voting are not subject at all to challenges under Section 2.

Last year, the United States Court of Appeals for the Ninth Circuit, in San Francisco, ruled that both Arizona restrictions violated Section 2 because they disproportionately disadvantaged minority voters.

In 2016, Black, Latino and Native American voters were about twice as likely to cast ballots in the wrong precinct as were white voters, Judge William A. Fletcher wrote for the majority in the 7-to-4 decision. Among the reasons for this, he said, were “frequent changes in polling locations; confusing placement of polling locations; and high rates of residential mobility.”

Similarly, he wrote, the ban on ballot collectors had an outsize effect on minority voters, who use ballot collection services far more than white voters because they are more likely to be poor, older, homebound or disabled; to lack reliable transportation, child care and mail service; and to need help understanding voting rules.

Judge Fletcher added that “there is no evidence of any fraud in the long history of third-party ballot collection in Arizona.”

In dissent, four judges wrote that the state’s restrictions were commonplace, supported by common sense and applied neutrally to all voters.

Lawmakers were entitled to try to prevent potential fraud, Judge Diarmuid F. O’Scannlain wrote. “Given its interest in addressing its valid concerns of voter fraud,” he wrote, “Arizona was free to enact prophylactic measures even though no evidence of actual voter fraud was before the legislature.”

The appeals court stayed its ruling, and the restrictions were in place for the election in November.

Mr. Brnovich will argue before the justices on Tuesday in the case that bears his name. He said the Ninth Circuit’s approach “would jeopardize almost every voting integrity law in almost every state.”

Leigh Chapman, a lawyer with the Leadership Conference on Civil and Human Rights, which filed a brief supporting the challengers, said the Supreme Court faced a crossroad.

“Especially in the absence of Section 5,” she said, “Section 2 plays an essential role in advancing the federal commitment to protecting minority voters and ensuring that they have an equal opportunity to participate in the political process.”

Joe Biden: Five key blunders from US President’s time in the White House

‘No deal, no Brexit’ Jenkin calls for domestic legislation if no trade agreement