Home » Politics » A War Is Ending. A Pennsylvania Town Exhales.

CANONSBURG, Pa. — Every year, Eric Miller brought his son Aidan to the famous Fourth of July parade in Canonsburg, an hourslong procession that draws tens of thousands of spectators, with lawn chairs set out along the route days ahead of time.

Since Aidan was 5, he felt the stirrings of patriotism and yearned to put on a uniform. Mr. Miller did not want his son to enlist. He worried as only a parent can that Aidan would be sent to a combat zone.

But straight out of high school, Aidan fulfilled his dream in this patriotic town south of Pittsburgh, where there are crisp American flags around memorials to veterans in front of the municipal building. Today, Aidan is 20 and stationed with the Army in Kentucky. And this past week, his father exhaled in profound relief when President Biden announced that American troops would be coming home from Afghanistan.

“I’m not a Biden fan but I’m for that, pulling the troops out of there,” said Mr. Miller, 46, a salesman. He dismissed the arguments of some Republican officials and military leaders that Taliban extremists would overrun the country once Americans left. “We can’t babysit everybody,” he said.

Mr. Biden’s announcement, with its evocative deadline to withdraw by Sept. 11, opens the way for a reckoning over how the war is ending and how Americans will feel the next time military intervention is on the table. Even in a place as deeply proud of America and its military as Canonsburg, many people were genuinely conflicted: They were tired of the war and worried about the troops, but also concerned about the ramifications of a full withdrawal. 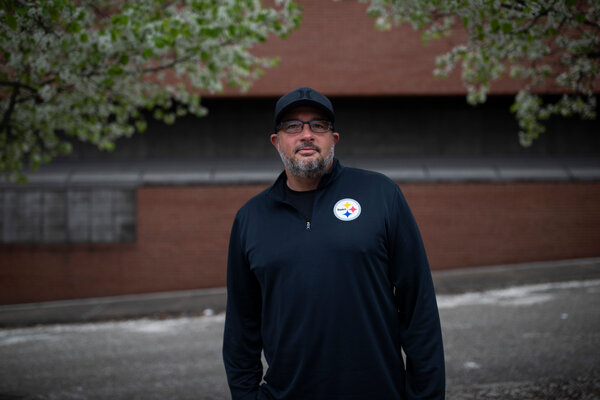 “It’s a very complicated question,” said Rick Palma, standing outside McGrogan’s Tap Room, reflecting on Mr. Biden’s decision. Mr. Palma is a retired manager at a United States Steel mill in nearby Clairton, which is the fictional setting for “The Deer Hunter,” the 1978 movie that powerfully evoked blue-collar communities whose young men went to Vietnam.

“Is it time to bring them home? Perhaps,” Mr. Palma, a former Army officer, said. “If you bring them all the way back, there’s the possibility that Al Qaeda will regroup.”

Those mixed feelings are a pretty good reflection of the conundrum that has faced the Obama, Trump and Biden administrations for the last 12 years. All three presidents wanted to end the war in Afghanistan, but saw clear risks, and uncertain public support: Only a minority of Americans embraced a full withdrawal when former President Donald J. Trump first proposed it in 2019, according to polls.

At the same time, the conflict has ceased to be a priority issue for most voters in recent elections; some have rallied behind the idea of ending “forever wars,” but many simply don’t think about Afghanistan. Mr. Biden’s determination to leave seems to embody the current mood among many Americans, one that is centered on their own lives, and the pandemic and the economy, with little energy left to worry about foreign conflicts.

That view, by a Democratic president in a deeply partisan era, is largely shared among people in southwestern Pennsylvania — a region generally hostile to Democrats, but where even voters who opposed Mr. Biden’s election approved of his withdrawal plan.

Larry Maggi, a commissioner of Washington County, which includes Canonsburg, said southwestern Pennsylvania most likely has one of the highest concentrations of veterans in the country.

“I work with veterans, I ride motorcycles with veterans, I drink beer with these guys,” said Mr. Maggi, who served in the Marine Corps during the Vietnam era. When it comes to Afghanistan, he said, “The general consensus is, What the hell are we doing over there?”

It raises the question of whether the country is entering a period echoing the “Vietnam syndrome” of the 1970s that made Americans skeptical of foreign intervention and turned their focus inward.

“The real problem here is we can’t be isolationist,” said Howard Dean, the Democrat who ran a 2004 presidential campaign as an early opponent of the Iraq War. He proposed a series of excruciating questions that Americans might face about using military force in the near future: What if China invades Taiwan? What if Russian tanks roll across Ukraine?

Along Pike Street in Canonsburg, the route of its famous Independence Day parade — said to be the largest in the state outside Philadelphia — there was near zero support for sending American troops into such hypothetical conflicts. As for Mr. Biden’s decision to pull most of the remaining 2,500 American soldiers out of Afghanistan, it had solid backing, though not universal support.

A town of 9,000 that was once a center of coal and steel, Canonsburg is filled with close-set houses, many with broad front porches, that rise up steep hills. In front of the town hall stands a clock presented by the Italian-American Association, and a statue of Perry Como, who clipped hair in town as a barber before finding fame as a 1950s crooner. On Thursday the busiest enterprises on Pike Street were a thrift store, a church-operated food bank, and Fix ‘Ur Cat, a storefront nonprofit that spays and neuters cats.

Kathleen Pallatto, who served in the Army as a nurse, and her husband, Robert, a retired corrections worker, were getting a free coronavirus test at a tent in the parking lot of a strip mall nearby. Both are conservative and distrustful of authorities; neither planned to get a Covid-19 vaccine.

Ms. Pallatto, 59, said Mr. Biden should not have announced a withdrawal deadline. “You televise to the Taliban we’re going to be completely gone at this date,” she said. America’s Afghan partners won’t be able to stand on their own “and we’re going to end up back there again,” she said.

But her husband, 63, disagreed. He favored a complete withdrawal, rejecting the argument that American efforts to stand up for democracy and protect the rights of women and girls could be lost.

“These countries have been run like this for hundreds of years,” he said. “The United States thinking they’re going to send our troops in and make them a democratic system — they’re beating a dead horse.”

Doug Scott, 44, a veteran of three tours in Iraq, agreed that American troops were unlikely to change illiberal attitudes and ethnic animosities that have produced generations of conflict in Afghanistan. But he argued that the United States should keep its footprint in the country for an inevitable flare-up.

“A total withdrawal would be catastrophic,” he said.

Not everyone on Pike Street was aware of the president’s decision to leave Afghanistan, a reflection of how the drawn-out conflict, with relatively low American casualties, has dropped from the headlines. Just 12 percent of Americans told an Associated Press/NORC poll last year that they closely followed events in the war.

Katherine Roddy, a mother of two young children, said she was unaware of the announced withdrawal when she came to her door. She and her husband, an academic, had lived in Egypt while he studied Arabic, and she sympathized with the plight of women in Muslim countries, but said it was time to depart Afghanistan.

“I’ve heard that the social situation in Afghanistan is devastating,” she said. “It’s hard to leave it that way, but I think it’s probably time.”

At Magenis Fine Cigars, the proprietor, Brian Magenis, was watching the History Channel from a couch in his emporium, which was set up like the living room of a retiree, which Mr. Magenis is in a way. He opened the cigar store after a career as a nuclear engineer.

“I’m really for eliminating the United States from going to foreign countries and fighting wars,” he said. Although Mr. Magenis originally supported the invasion of Afghanistan “100 percent,” the conflict had been far from his mind. “I really haven’t thought about it until just recently when Biden said he’d pull the troops out,” he said.

Another person for whom the withdrawal was news was Bridget Laero, the 37-year-old manager of Nice Ink, one of Pike Street’s two tattoo parlors. She said she had many customers who were veterans. Their taste in body art runs to “traditional” subjects — “eagles, flags, things of that nature,” Ms. Laero said.

“Hearing that sounds foolish,” she said of the president’s decision about Afghanistan. “I personally think our troops over there have helped, and it’s just going to open up more time and space for more war, more chaos.”

For others, Mr. Biden’s decision adds a punctuation mark to an era that began with a nation solidly unified by the need to go to war after an attack on American soil, and is ending with much of the country in an antiwar frame of mind, but with little unity over all.

Hal Gollos, an Army veteran who was stationed in South Korea during the 1970s, voted for Mr. Trump in 2016, but by last year he thought “the wheels were coming loose” and he swung to support Mr. Biden. He endorsed the president’s decision.

“Twenty years in one country,” he said, “is long enough.”

Labour savaged over ‘soundbitey’ social care demands: ‘Where’s the beef in this?’

No deal, no delay, or no idea: How cabinet is split on Brexit