Home » Politics » Anxious Democratic Establishment Asks, ‘Is There Anybody Else?’

WASHINGTON — When a half-dozen Democratic donors gathered at the Whitby Hotel in Manhattan last week, the dinner began with a discussion of which presidential candidates the contributors liked. But as conversations among influential Democrats often go these days, the meeting quickly evolved into a discussion of who was not in the race — but could be lured in.

Would Hillary Clinton get in, the contributors wondered, and how about Michael R. Bloomberg, the former New York mayor? One person even mused whether Michelle Obama would consider a late entry, according to two people who attended the event, which was hosted by the progressive group American Bridge.

It’s that time of the election season for Democrats.

“Since the last debate, just anecdotally, I’ve had five or six people ask me: ‘Is there anybody else?’” said Leah Daughtry, a longtime Democrat who has run two of the party’s recent conventions.

With doubts rising about former Vice President Joseph R. Biden’s ability to finance a multistate primary campaign, persistent questions about Senator Elizabeth Warren’s viability in the general election and skepticism that Mayor Pete Buttigieg, of South Bend, Ind., can broaden his appeal beyond white voters, Democratic leaders are engaging in a familiar rite: fretting about who is in the race and longing for a white knight to enter the contest at the last minute.

It is a regular, if not quite quadrennial, tradition for a party that can be fatalistic about its prospects and recalls similar Maalox moments Democrats endured in 1992, 2004 and in the last primary, when it was Mr. Biden who nearly entered the race in October. But the mood of alarm is even more intense because of the party’s hunger to defeat President Trump and — with just over three months to go before voting starts in Iowa — their impatience with finding Mr. or Mrs. Right among the current crop of candidates.

“There’s more anxiety than ever,” said Connie Schultz, a journalist who is married to Senator Sherrod Brown of Ohio, another Democrat who some in the party would like to see join the race. “We’re both getting the calls. I’ve been surprised by some who’ve called me.”

“I can see it, I can feel it, I can hear it,” Mitch Landrieu, the former New Orleans mayor, said of the unease within the party. He said he thinks Mr. Biden is best positioned to defeat Mr. Trump but called the former vice president’s fund-raising “a real concern.” 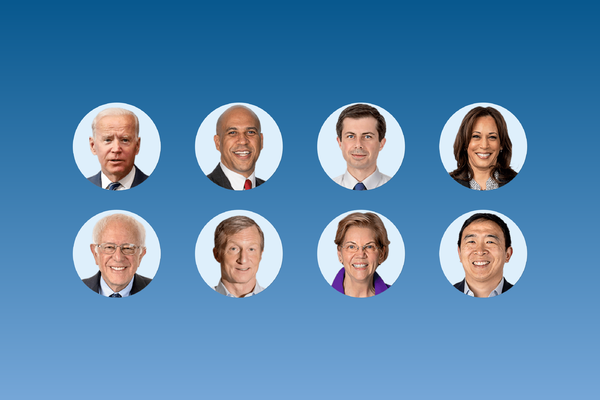 Which Democrats Are Leading the 2020 Presidential Race?

There are 19 Democrats running for president. Here’s the latest data to track how the candidates are doing.

Mr. Biden’s lackluster debate performances and alarmingly low cash flow — he has less than $9 million on hand, not even half of some of his rivals — has fueled the Democratic disquiet. But if the causes of the concern are plain to see, what exactly can be done about it is less clear.

And even some of those being wooed acknowledge that it can be hard to discern between people just being nice and those who genuinely want them in the race.

Mrs. Clinton and Mr. Bloomberg have both told people privately in recent weeks that if they thought they could win, they would consider entering the primary — but that they were skeptical there would be an opening, according to Democrats who have spoken with them.

Former Secretary of State John F. Kerry, who associates say has wondered aloud about whether he should have run and has found it hard to watch Mr. Biden’s missteps, has also been urged to get in. But he still thinks the former vice president, who was once his longtime Senate colleague, is the party’s best nominee.

Another Obama administration official who weighed a campaign at the start of the year, former Attorney General Eric Holder, is considering a last-minute entry but has conceded it may be too late, according to a Democrat familiar with his thinking.

Mr. Brown, who nearly entered the race earlier this year, said the pressure on him to reconsider from labor leaders, Democratic officials and donors has “become more frequent.” And Deval Patrick, the former Massachusetts governor, who also weighed a campaign run before deciding not to, said he too has been nudged by friends to reconsider. “It’s nice to be rumored about,” he said, before notably refusing to rule out a last-minute entry. “Don’t ask me that question,” he said.

But Mr. Patrick suggested an 11th-hour bid was highly unlikely and had a message for increasingly angst-ridden Democrats: “Everybody needs to calm down, it’s early. It’s so early.”

The chances that another major contender decides to run are remote: While Mrs. Clinton and Mr. Bloomberg have both been encouraged to enter the race, Democrats close to them believe the only scenario under which they’d consider running is if Mr. Biden drops out or is badly weakened.

Neither is likely to take place before the end of this calendar year, at which point the filing deadline to be on the primary ballot in large Super Tuesday states like California and Texas will have passed. But that’s not stopping the speculation, which has only grown of late thanks in part to the 2016 Democratic nominee’s public comments.

Mrs. Clinton, after largely staying in the background of the Democratic primary, has been more vocal this month, promoting a book she wrote with her daughter and taunting Mr. Trump on Twitter. She also opened a feud with Representative Tulsi Gabbard of Hawaii by claiming the long-shot candidate was being supported by the Russians, as a potential third-party spoiler in the general election.

Democrats who have recently spoken with Mrs. Clinton say she shares the same concerns other party elites have about the field — worried about Mr. Biden’s durability, Ms. Warren’s liberal politics and unsure of who else can emerge to take on Mr. Trump. But these people, who spoke anonymously to discuss private conversations, say she enjoys the freedom that comes with not being on the ballot.

Mr. Bloomberg is said to be more eager to find a way into the race — and chatter about his potential candidacy has only grown among Democrats who work on Wall Street and are concerned about Ms. Warren’s rise. He raised some eyebrows recently by putting off a fund-raising request from one third-party Democratic group until he knew about his own intentions, according to two Democrats familiar with the conversation.

But the former New York mayor has flirted with presidential runs before, only to pull back. Friends say he recognizes his long odds at this stage of the race and his advisers suggest he will play a significant financial role in the 2020 race without his name on the ballot.

Still, it’s unlikely that the what-if musing, particularly among the party’s class of donors, elected officials and strategists, will quiet down as long as Mr. Biden is struggling and Ms. Warren, the Massachusetts senator, is surging.

“With Trump looming, there is genuine concern that the horse many have bet on may be pulling up lame and the horse who has sprinted out front may not be able to win,” said David Axelrod, a former adviser to President Barack Obama.

While much of the daydreaming about a last-minute entry comes from pro-business Democrats, it is not confined to the wealthy.

Mr. Brown and Ms. Schultz noted that they were hearing from a broad range of people but declined to offer any names.

He said he was staying out of the race and had no regrets. The Ohio senator said he was confident Democrats would eventually rally behind their nominee, but he warned the party not to embrace a single-payer health care plan that eliminates private insurance.

“I think it’ll be a hard sell to the public if we go into the general election for ‘Medicare for all,’” said Mr. Brown, citing the risk of alienating union workers who would lose their negotiated plans.

One longtime Democrat who originally sought to entice Mr. Brown into the race, Randi Weingarten, the president of the American Federation of Teachers, could not help letting out a loud “oy!” when asked about the possibility of another candidate joining the sprawling field.

“For as long as I have been in politics, I’ve heard Democrats fretting about their presidential contenders,” said Ms. Weingarten.

Indeed, for some Democrats, the grass is always greener outside their field.

There were multiple stages of the 1992 primary when Bill Clinton’s candidacy was seen as doomed, either because of his own vulnerabilities or because of the third-party threat of H. Ross Perot, the wealthy Reform Party candidate. Would-be Democratic saviors that year included Gov. Mario Cuomo of New York, former Senators Lloyd Bentsen of Texas, Sam Nunn of Georgia and Al Gore of Tennessee, and Representative Richard Gephardt of Missouri.

In the 2004 race, Mr. Gore was again sought after as a potential candidate. That race evolved along similar lines to the current primary, with Democrats desperate to oust an incumbent Republican (George W. Bush) but nervous that their front-runner into the fall (Gov. Howard Dean of Vermont) would prove unelectable as the nominee. That time, a candidate did come in relatively late in the race, Wesley K. Clark, a retired general, but he gained little traction and Mr. Kerry ultimately won the nomination.

At this time three years ago, it was Mr. Biden who some Democrats were hoping would join the race to offer the party another option besides Mrs. Clinton and Senator Bernie Sanders of Vermont. Mr. Biden, of course, decided not to run. But now it’s his own candidacy that’s prompting a familiar call for the cavalry, or at least one horse-bound white knight.

“If Biden were surging, I doubt you would be hearing this,” said Harold Ickes, a longtime Democratic consultant. “This shows a restlessness among a lot of people.”

Jonathan Martin is a national political correspondent. He has reported on a range of topics, including the 2016 presidential election and several state and congressional races, while also writing for Sports, Food and the Book Review. He is also a CNN political analyst. @jmartnyt

Where’s Boris?! PM should be front and centre leading Brexit but he’s INVISIBLE!