The Archbishop of Canterbury faces a political backlash after reportedly agreeing to chair public meetings aimed at stopping a no-deal Brexit.

Justin Welby is reportedly in talks to chair events known as “citizens’ assemblies” at Coventry Cathedral next month.

It comes as a group of MPs opposed to leaving the EU without a withdrawal agreement prepare to sign a declaration pledging to ensure the public’s voice “continues to be heard throughout this crucial period”.

The Most Reverend Welby’s reported intervention has been criticised by leading Tory Brexiteers in The Times.

“But he shouldn’t allow himself to be tempted into what is essentially a very political issue right now.”

Mark Francois, vice-chair of the Brxiteer lobbying European Research Group, also said people were exhausted from being told why the EU referendum result should be overturned.

“I suspect they will not be overjoyed by having it rubbed in by the Archbishop of Canterbury to boot,” he added.

But the archbishop received support from his fellow clergyman, the Bishop of Buckingham.

The Right Rev Alan Wilson said: “In a mature democracy people would not be afraid of doing this, because it would show what people’s concerns and fears and hopes and aspirations around this subject were.” 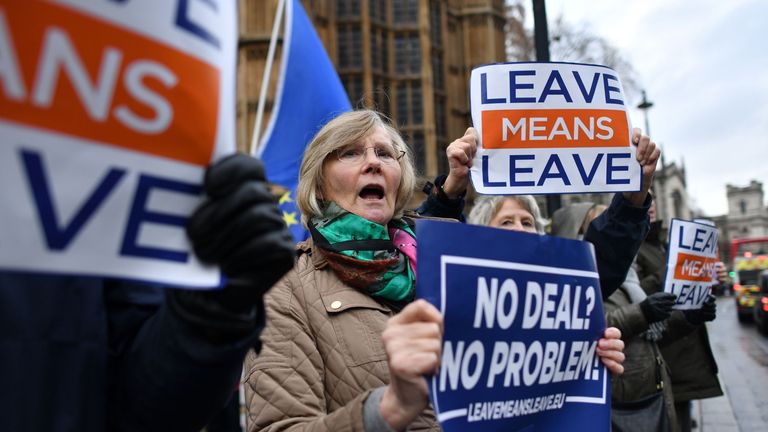 A recent cross-Whitehall leaked report warned of food, fuel and medicine shortages, and delays at the UK border for the flow of goods lasting up to six months.

The government claimed it was an old document but Sky News understands it was dated 1 August.

Following the 2016 referendum, Most Rev Welby told the House of Lords that the Brexit campaign had resulted in an “out-welling of poison and hatred” in Britain.

He added: “It is essential not only in this house but for the leaders of both sides and throughout our society to challenge the attacks, the xenophobia and the racism that seem to have been felt to be acceptable at least for a while.”