Joseph R. Biden Jr. urged Republicans on Sunday not to rush a Supreme Court nominee through the Senate in the final six weeks before the presidential election, suggesting that such a move would amount to an “abuse of power” at an already perilous moment in American political history.

In his first extensive remarks on the looming Supreme Court battle since he acknowledged the death of Justice Ruth Bader Ginsburg on Friday, Mr. Biden, the Democratic presidential nominee, appealed directly to the few pivotal Senate Republicans “who really will decide what happens,” urging them to oppose an effort to push through a new nominee before the election.

“Please, follow your conscience,” he pleaded in a speech at the National Constitution Center in Philadelphia. “Don’t vote to confirm anyone nominated under the circumstances President Trump and Senator McConnell have created. Don’t go there. Uphold your constitutional duty. Your conscience. Let the people speak. Cool the flames that have been engulfing our country.”

Mr. Trump has promised to nominate a woman for the position in the next week, seizing on an issue that has the potential to electrify the bases of both political parties and to inject a new measure of uncertainty into an already unpredictable presidential race. Senator Mitch McConnell of Kentucky, the majority leader, has vowed to hold a floor vote.

Many Republican senators have already indicated their support for Mr. Trump’s approach, fueling long-simmering Democratic skepticism over Mr. Biden’s insistence that bipartisan cooperation was still possible, even in an era of political polarization. Mr. Biden promised on Sunday that as president, he would consult with senators from both parties before selecting his own nominee, part of “a process that restores our finest traditions, not the extension of one that’s torn this country apart the last years.”

He also said that he did not intend to release his own list of possible Supreme Court choices before the election, as Mr. Trump has done. But Mr. Biden reiterated his pledge to put a Black woman on the court, which he first made during the Democratic primary race. “I made it clear that my first choice for the Supreme Court will make history as the first African-American woman justice,” he said.

If Mr. Trump wins, he said, “then the Senate should move on his selection and weigh the nominee he chooses fairly.”

“But if I win this election, President Trump’s nominee should be withdrawn,” Mr. Biden continued. “As the new president, I should be the one who nominates Justice Ginsburg’s successor, a nominee who should get a fair hearing in the Senate.” 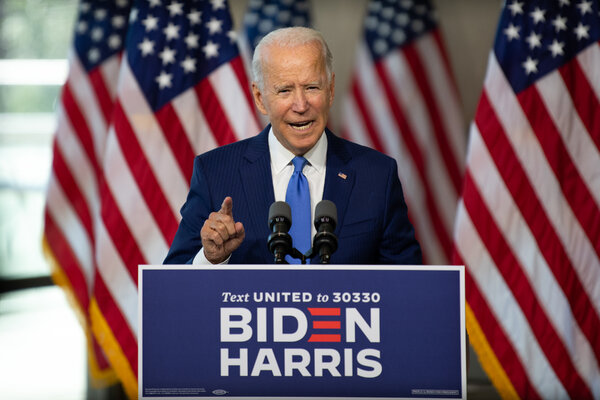 Mr. Biden’s remarks come as he and other Democrats seek to frame the Supreme Court fight around health care. Amid coordination between the Democratic presidential ticket and Democratic leadership in the House and the Senate, the party is casting its arguments in particular around protecting the Affordable Care Act and its guarantee of coverage for people with pre-existing conditions, especially in a pandemic. Arguments in a case that may determine the future of the health law are set for a week after Election Day, and the Trump administration is asking the court to strike down the law.

Health care was a key issue for Mr. Biden and other Democratic candidates even before Justice Ginsburg’s death, as they hoped for a repeat of the success that Democratic House candidates found in the 2018 midterm elections, when the party won control of the chamber. And for months, Mr. Biden had sought to make the election a referendum on Mr. Trump’s stewardship of the pandemic and its associated economic fallout.

Over the weekend, Biden allies sought to link that message to the Supreme Court, arguing that the coronavirus crisis makes the issue of health care protections all the more urgent. Mr. Biden addressed both of those issues on Sunday as he described the stakes of the current political moment.

“We’re in the middle of a pandemic,” he said, going on to add, “Health care in this country hangs in the balance before the court.”

Mr. Biden first weighed in on the Supreme Court vacancy on Friday night, saying in brief remarks that it should not be filled until after the election and pointing to the refusal of Senate Republicans to consider President Barack Obama’s nomination of Judge Merrick B. Garland in 2016.

But Mr. Trump and Mr. McConnell are pressing ahead with plans to vote on a nominee, a strategy that is fueling calls among some Democrats to consider extreme options should they win in November. Already, some progressives are pushing Democrats to get behind the idea of expanding the size of the Supreme Court in response if the party wins control of the White House and the Senate. Mr. Biden has previously expressed opposition to the idea of adding seats to the court.

During his speech on Sunday, Mr. Biden specified that he was not speaking to Mr. Trump or Mr. McConnell, but rather Republican senators “who know deep down what is right for the country and consistent with the Constitution,” saying at another point that “we need to de-escalate, not escalate.”

Before the speech, a spokesman for the Trump campaign, Tim Murtaugh, criticized Mr. Biden for not releasing a list of potential Supreme Court nominees.

“Biden knows that he is an empty vessel for the radical left, and that’s why he’s refusing to be honest with the American people about who he would want on the court,” Mr. Murtaugh said in a statement.

But in his speech, Mr. Biden firmly rejected the idea of releasing a list. He inaccurately said that “the Trump campaign asked that I release the list only after she passed away,” referring to Justice Ginsburg; the Trump campaign called on him to do so earlier this month when the president released his own list.

Brexit: UK to lose ANY say on future EU rules in exchange for DELAY with ‘poison letter’