WASHINGTON — One Democratic candidate would post asylum officers at the border to decide immigration cases on the spot. Others would create an entirely new court system outside the Justice Department. Some have suggested reinstating a program that would allow Central American minors to apply for refugee status in their home countries.

The Democrats running for the White House do not lack ideas on the hot-button issues of immigration and border control. But as they prepare to take the stage on Thursday for their debate in Houston, most would rather talk about the hard-line policies of the man they seek to replace, President Trump.

Revealing specific details on immigration could undoubtedly backfire because “it is in many ways a third rail in our politics” now, said Doris Meisner, a former commissioner of the Immigration and Naturalization Service, the agency that was responsible for immigration enforcement in the United States before ceasing operations in 2003.

But, she added: “It’s not enough to be against things. You have to figure out what you’re for, and you have to make a case for why you think things should be different.”

An examination of the candidates’ immigration policies and stances shows they have spent most of their efforts on dismantling the Trump administration’s policies, without really laying out how, if elected, they would handle illegal border crossings, eliminate a growing immigration court backlog, direct immigration enforcement or address the root causes of migration from Central America.

But the candidates are largely refraining from going in depth on the most salient issues of immigration policy, including whom they would deport and whom they would let into the country.

The “open borders candidate” label — already applied to the field by Mr. Trump — could alienate voters otherwise open to the Democratic pitch. 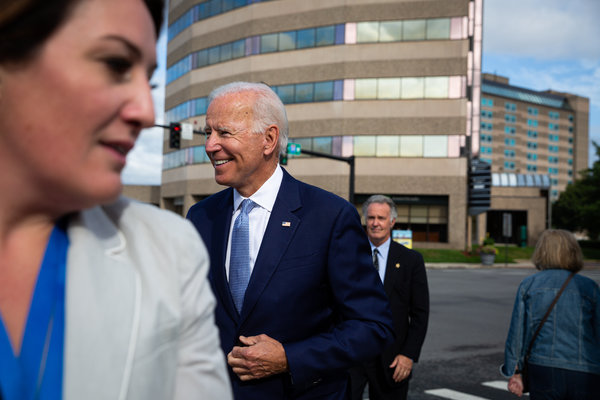 “The Democrats’ strategy is to make white women in the suburbs cry about Trump’s treatment of migrants and then pivot to health care,” said Chris Newman, the legal director for the National Day Laborer Organizing Network, a pro-immigration group. “That approach might have worked in 2018, but I don’t think it will work in 2020, in part because Trump won’t let them pivot to health care.”

The immigration issue already had a noticeable impact on the race during the first round of Democratic debates in June. On the first night, Mr. Castro pointedly asked the other candidates to join him in supporting the repeal of a statute that makes crossing the border without permission a criminal offense. The next night, with another 10 presidential candidates onstage, moderators asked for a show of hands of those who agreed with Mr. Castro and supported decriminalizing the offense. Eight hands rose. Some candidates added that they also supported providing undocumented immigrants with health care.

The next day, Mr. Trump took advantage. “That’s the end of that race!” he tweeted.

Mr. Biden, the early front-runner for the Democratic nomination, has spent most of his time focusing on Mr. Trump’s policies through campaign videos, statements and essays. In an opinion piece in The Miami Herald, Mr. Biden targeted Mr. Trump’s threat to deport millions of immigrants and restrict temporary protections for migrants fleeing disasters. He also blamed Mr. Trump for damaging the United States’ relationship with Mexico.

Mr. Biden has made clear that he would invest in Central American countries and technology at the border and support Dreamers. But he has released few details on whom he would prioritize deporting and how he would eliminate the immigration court backlog.

The Biden campaign said in a statement that the candidate is focused on addressing the root causes of migration and would, as president, give legal status to Dreamers and streamline the asylum process. The campaign had harsh words for Mr. Trump’s “repugnant” treatment of migrant children and immigration policies, which it described as “contrary to our values as a nation.”

The Democratic candidates have all said they would end the Trump administration’s practices of limiting who can apply for asylum at ports of entry and returning migrants to Mexico while their cases are processed. They would all also increase the annual cap on refugees allowed into the United States, which the president has lowered significantly, and end both the administration’s travel ban and its policy of separating families at the border.

“The Democrats will run on a lesser-of-two-evils strategy as they have been for many years,” Mr. Newman predicted. “There’s never been an easier time for them to do that.”

In response to a list of questions, a campaign adviser for Mr. Sanders specified that his administration would reinterpret the Trafficking Victims and Protection Act, the immigration law that previous administrations have said categorizes children as “unaccompanied” if they arrive at the border with a relative that is not their parent. Mr. Sanders said he did not think children who arrived with uncles, aunts or grandparents should be separated from their companions.

Mr. Castro, the first candidate to issue an immigration plan, has said he would transfer enforcement responsibilities within Immigration and Customs Enforcement to other agencies, including the Justice Department. Mr. Castro also said he would reprioritize Customs and Border Protection to focus on drug and human trafficking as opposed to enforcement of immigration laws in the interior of the country through, for instance, traffic stops.

Mr. Castro, Mr. O’Rourke, Ms. Warren and Mr. Booker have said in their plans that they would end agreements allowing local police departments to refer undocumented immigrants to ICE.

It remained unclear whom the candidates would deport, however.

Some of the candidates said they would redirect agents to focus on undocumented immigrants with criminal records, without specifying what kind of criminal histories would warrant detainment or deportation.

An adviser for Mr. O’Rourke’s campaign said he would focus on detaining smugglers. “Yes, families will be released into our communities,” the campaign said in response to questions.

The former congressman and other candidates also said they would support releasing families into the public, instead of holding them in detention facilities at the border. Families would be assigned a case manager and released as their claims were processed.

Mr. Yang said he would create a new program that would provide protections for undocumented immigrants “who have been here a substantial amount of time” to work and live in the country for 18 years while pursuing citizenship as long as they paid their taxes and avoided felony crimes. Immigrants who did not enroll in the program would be deported, according to his plan.

Mr. Castro said he would create a “Marshall Plan” for the development of Central American countries. Mr. O’Rourke’s campaign specified that he would invest $5 billion in Central American countries through public and private partnerships. Ms. Warren said she would invest $1.5 billion annually in the countries. Mr. Booker said he would appoint a special envoy to address corruption and violence in the region.

At the border, Mr. O’Rourke said he would empower asylum officers to adjudicate cases themselves and would deploy 2,000 lawyers to the border.

But the public is unlikely to hear about those details during the debate on Thursday, according to Theresa Cardinal Brown, a former Department of Homeland Security official under Presidents Barack Obama and George W. Bush.

“There is political wisdom in Washington that says the less detail you put out there the better,” Ms. Cardinal Brown said. “That may be true for politics, but it doesn’t help people get a good understanding of what you’re for.”

Trump to Give State of the Union Address Feb. 4

London horror: Woman ‘ran over in street before man threw body into car’ in Croydon
Asia