The plan synthesizes recommendations throughout the government that would aim to identify extremists in the United States after years of heightened focus on terrorists abroad. 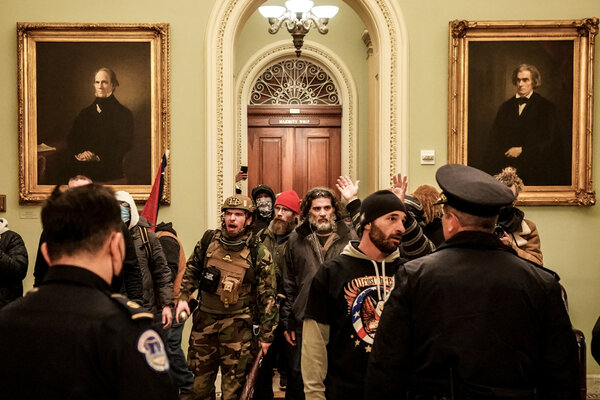 WASHINGTON — The Biden administration is aiming to bolster information sharing with technology companies, potentially expand hiring of intelligence analysts and improve screening of government employees for ties to domestic terrorism as part of a much-anticipated plan expected to be released on Tuesday detailing how the federal government should combat extremism.

President Biden ordered the review of how federal agencies addressed domestic extremism soon after coming into office, part of an effort to more aggressively acknowledge a national security threat that has grown since the Capitol riot on Jan. 6.

The 32-page plan synthesizes steps that have been recommended by national security officials — including bolstering relationships with social media companies and improving information sharing among law enforcement agencies — into one blueprint on how to more effectively identify extremists in the country after years of heightened focus on foreign terrorists.

“We cannot ignore this threat or wish it away,” Mr. Biden wrote in the strategy document. “Preventing domestic terrorism and reducing the factors that fuel it demand a multifaceted response across the federal government and beyond.”

But the plan, titled “National Strategy for Countering Domestic Terrorism” and issued by the National Security Council, also left some questions unanswered.

The new strategy was widely expected to detail a position on whether the government should establish a domestic terrorism law that prosecutors could use to investigate and charge homegrown extremists instead of relying on assault, murder and hate crime charges. The strategy instead indicates that the administration is focused for now on bolstering methods of combating extremism already used by the government, despite Mr. Biden calling for such a law during the presidential campaign.

While there is increasing bipartisan support to equip prosecutors with more laws to crack down on extremists, civil rights advocates have expressed concern that new statutes would lead to government overreach and infringements on privacy rights. The administration referred the issue to the Justice Department for further review, according to the planning document.

Boris Johnson vs Jeremy Hunt: Tory leadership race is on – who will be the UK’s next PM?

Bill Clinton Is Writing a Book About His Post-Presidential Life