Home » Politics » Biden meets with DACA recipients as his administration grapples with the border surge. 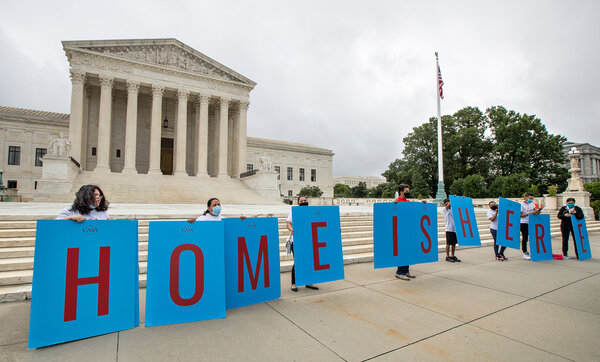 President Biden met on Friday with six so-called Dreamers — participants in the Deferred Action for Childhood Arrivals program — to illustrate his reversal from the Trump administration’s immigration policy and to push for a reform bill in Congress.

The meeting is the second such event featuring DACA recipients in the Oval Office. The last one was held in February 2015, with President Barack Obama and Mr. Biden, then the vice president, in attendance.

The meeting comes at a consequential moment for the White House. While the flood of migrants to the southern border has eased in recent days, the overwhelming number of people who tried to enter the country earlier this year has left federal authorities scrambling to find living space for adults and children taken into custody.

NBC News on Thursday reported that minors who migrated to the country were waiting on buses parked in a parking lot in Dallas, and were forced, in some cases, to remain overnight — eating, sleeping and using the bathroom on the vehicles — while they waited to be sent to relatives or longer-term facilities.

Jen Psaki, the White House press secretary, told reporters on Friday that the administration was investigating the report, saying that the conditions described were “outrageous.”

“They’re unacceptable, and they do not meet our standard for child care,” she said.

Mr. Biden has called upon legislators to permanently ensure protection for the Dreamers, migrants who came to the United States as young children.

The half-dozen young people who visited with Mr. Biden were chosen to represent a cross-section of DACA participants.

Esmeralda Tovar-Mora migrated from Mexico to Kansas when she was 18 months old, married a National Guard member, and is raising a three-year-old daughter as a U.S. citizen, while enrolled in nursing school.

Astou Thiane, who was born in Senegal and grew up in New York, joined Teach for America, while Jirayut “New” Latthivongskorn, who migrated from Thailand at the age of 9, was a plaintiff in a casethat led to the Supreme Court decision upholding DACA protections. The names, which were first reported by NBC News, were confirmed by the White House.