After pressing toward a vote, Democratic leaders accepted “reality” that the bill could not pass before a broad climate change and safety net measure comes together. 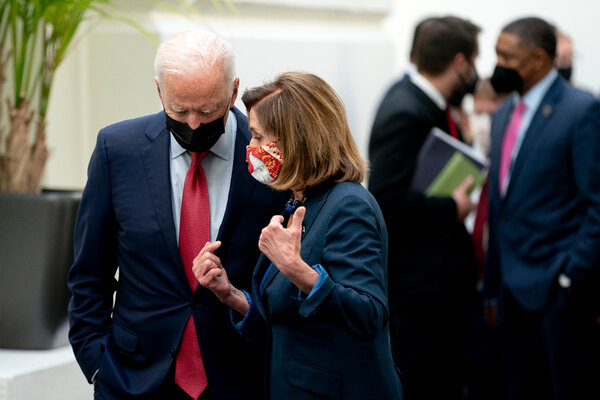 By Jonathan Weisman and Emily Cochrane

WASHINGTON — President Biden, facing an intraparty battle over his domestic agenda, put his own $1 trillion infrastructure bill on hold on Friday, telling Democrats that a vote on the popular measure must wait until Democrats pass his far more ambitious social policy and climate change package.

In a closed-door meeting with Democrats on Capitol Hill, Mr. Biden told Democrats for the first time that keeping his two top legislative priorities together had become “just reality.” And he conceded that reaching a deal between the divided factions on his domestic agenda could take weeks.

The decision was a blow to his party’s moderate wing, the driver behind efforts to separate the measures and score a quick victory on the traditional roads-and-bridges bill its members badly wanted to begin campaigning on. It was a win for the liberal flank, which has blocked any action on that bill until Senate Democrats unite around an expansive bill to confront climate change, expand the frayed social safety net and raise taxes on the rich.

And it amounted to something of a gamble, since the president was effectively delaying final action on the part of his economic agenda he has nearly secured in hopes of unifying his razor-thin Democratic majorities around the larger social policy and clean energy measures that have clearly divided them.

“If we get it done, it’ll be a victory. The question is: When do we get that victory?” asked Representative Henry Cuellar of Texas, one of nine centrist Democrats who extracted a promise from Ms. Pelosi for an infrastructure vote by October.

Democratic leaders insisted they had moved closer together and still had plenty of time to resolve their differences over the bigger bill and deliver on the president’s promises.

“While great progress has been made in the negotiations to develop a House, Senate and White House agreement on the Build Back Better Act, more time is needed,” Ms. Pelosi wrote in a letter to her colleagues. “Clearly, the bipartisan infrastructure bill will pass once we have agreement on the reconciliation bill.”

To buy negotiating space, the House passed a stopgap measure to extend federal highway programs that expired on Friday, and the Senate planned to pass the measure as early as Saturday.

Continuing talks between the White House and two holdout moderate senators, Kyrsten Sinema of Arizona and Joe Manchin III of West Virginia, centered on getting them to around $2 trillion in spending on climate change and social policies such as universal prekindergarten and paid family leave. But Ms. Sinema left Washington for a medical appointment and fund-raising retreat in Phoenix — complete with a morning donor hike and an evening cocktail hour and dinner — without a resolution.