As the president took forceful new steps to pressure Americans to get inoculated, he argued that they were urgently needed health measures. In his allies’ view, they were also good politics. 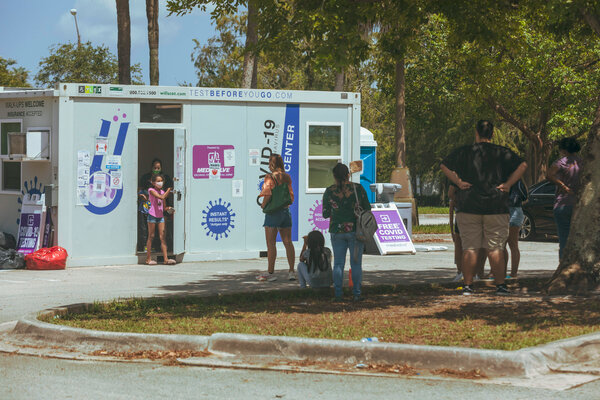 FAIRFAX, Va. — Terry Orie, a 61-year-old real estate agent, has skipped vacations because of the pandemic. She has canceled plans with friends. She has bristled at the frustrations of communicating with clients when everybody is wearing masks.

Ms. Orie is fed up with the coronavirus’s effects on her life. And she knows exactly whom to blame. “I don’t get it, I don’t get why they don’t wear masks and why they won’t get vaccinated,” she said Friday, sitting outside a Whole Foods in Fairfax with her 14-year-old toy poodle, Tootsie. “People think it’s their God-given right to put everybody else’s health at risk.”

After President Biden resisted comprehensive vaccine mandates for months, his forceful steps on Thursday to pressure the 80 million unvaccinated Americans to get their shots put him squarely on the side of what had been a fairly quiet but increasingly frustrated majority: vaccinated Americans who see the unvaccinated as selfishly endangering others and holding the country back.

The new federal rules — including a requirement that private-sector businesses with more than 100 workers require vaccinations or frequent testing — are a sharp pivot for the administration, which had feared that a heavy-handed approach would be viewed as government overreach and be met with even fiercer opposition from those leery of getting the shot. But with the Delta variant surging, overwhelming I.C.U.s and creating a fresh drag on the still-fragile economic recovery, failing to take more aggressive action was even riskier, both to public health and to Mr. Biden’s political standing, White House allies said.

Already, there were signs that voters were unhappy with Mr. Biden’s initial response. Since the administration heralded its progress overcoming the pandemic on July 4, the unchecked spread of the virus this summer, and the chaotic withdrawal from Afghanistan, contributed to a notable drop in the president’s approval rating.

Now, by taking direct aim at the unvaccinated and Republican officials who encourage or condone vaccine refusal, Mr. Biden is returning to a central posture of his campaign, casting himself as a sober voice on behalf of science and reason standing up to an angry and conspiratorial minority.

The approach has already been road-tested by other Democrats on the ballot this fall.

In California, Gov. Gavin Newsom surged in the polls after pivoting to a message that highlighted his support for masking and vaccine mandates while raising alarms that Republicans would undo those public health measures, linking those vying to replace him to Gov. Greg Abbott of Texas and Gov. Ron DeSantis of Florida, among others.

General election 2019 POLLS: How Tories, Brexit Party and Labour could fare in an election