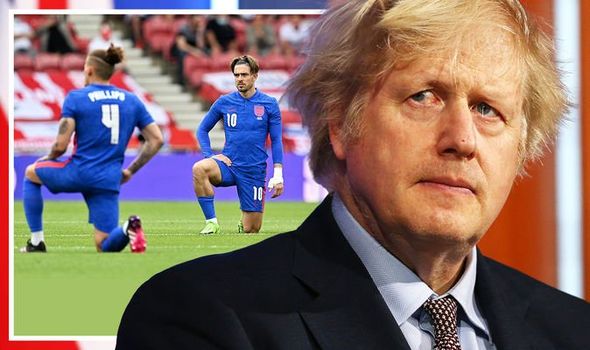 The Prime Minister has given his support to players having the right to take the knee before games after a number of England fans booed the team ahead of kickoff at an international friendly over the weekend.

Prior to an England v Romania match last night the national team took part in the symbolic stand against racism.

Similar demonstrations have taken part ahead of most football matches in England since the death of George Floyd in the US last summer.

The protest is deemed controversial by some, who criticise the links between taking the knee and the political movement Black Lives Matter.

England players were also met with boos when they took the knee ahead of a friendly against Austria last Wednesday.

He said: “The Prime Minister respects the right of people in this country to peacefully protest.”

The No10 official said Mr johnson wanted “all England fans to be respectful in any football match” as he urged the nation to cheer on Gareth Southgate’s men in the Euros 2020 competition which gets underway later this week.

“The Prime Minister is supporting the England football team and wants them to succeed and he wants the whole country to get behind them in that endeavour in this tournament,” he said.

While supportive of players who wish to take the knee, the spokesman added Mr Johnson believed it was more important to take “action rather than gestures” when it comes to tackling racism.

He said: “On taking the knee, specifically, the Prime Minister is more focused on action rather than gestures.

“We have taken action with things like the Commission on Racial and Ethnic Disparities and that’s what he’s focused on delivering.

“But he fully respects the right of those who do choose to peacefully protest to make their feelings known.”