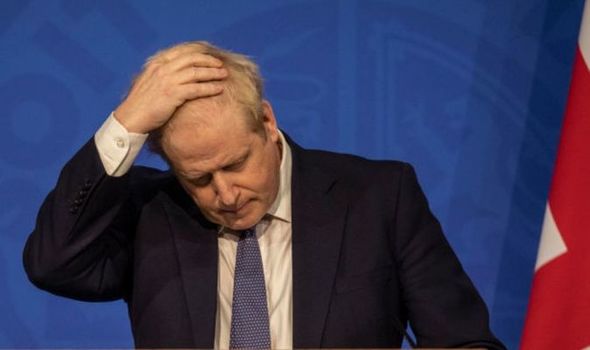 His now-wife Carrie organised a surprise birthday gathering for the Prime Minister in June 2020 – despite the rules forbidding indoor social mixing.

Up to 30 people attended the afternoon get-together in the Cabinet Room at Number 10, where picnic food and cake were served.

Downing Street did not deny the celebration took place but refuted claims that some guests later went up to the PM’s flat.

Mr Johnson “was there for less than ten minutes”, officials said.

The latest allegations emerged as senior civil servant Sue Gray’s finalises her report into accusations about the behaviour of No10 at the peak of the pandemic.

They also surfaced on the day Dominic Cummings revealed he refused to take part in a face-to-face interview for the probe.

Mr Johnson’s former chief adviser insisted on submitting only written evidence, claiming he told Ms Gray: “If we speak the PM will invent nonsense and spin it.”

ITV News last night reported the latest Partygate allegations, stating the birthday bash came when Mr Johnson returned from a visit to a school in Hertfordshire on June 19, 2020.

Interior designer Lulu Lytle, helping with the controversial redecoration of the PM’s Downing Street flat, was said to have been among the guests.

Carrie was reported to have presented Mr Johnson with a cake for his 56th and led staff in a chorus of Happy Birthday.

Guests ate picnic food from Marks & Spencer during the 20 to 30-minute event.

Nine days earlier, the PM had asked people to stick to lockdown guidance, telling a press conference: “I urge everyone to continue to show restraint and respect the rules which are designed to keep us all safe.

“It’s only because of the restraint that everyone, you all have shown so far, that we are able to move gradually out of this lockdown.”

He added: “It is emphatically not designed for people who don’t qualify to start meeting inside other people’s homes – that remains against the law.”

A couple of months earlier on March 21, 2020, the Prime Minister replied to a letter from Josephine Booth, aged seven, who had cancelled her own birthday party, telling her: “We all have got to do our bit.”

A Downing Street spokesman said: “A group of staff working in No10 that day gathered briefly in the Cabinet Room after a meeting to wish the Prime Minister a happy birthday.”

Responding to the claims about the alleged event later, the spokesman added: “This is totally untrue.

“In line with the rules at the time, the Prime Minister hosted a small number of family members outside that evening.”

But Culture Secretary Nadine Dorries later tweeted: “So, when people in an office buy a cake in the middle of the afternoon for someone else they are working in the office with and stop for ten minutes to sing Happy Birthday and then go back to their desks, this is now called a party?”

Tory backbenchers suggest its findings will prove decisive in whether the PM can keep his job due to the backlash.

Mr Cummings, sacked from his role in November 2020, last week suggested he was prepared to “swear under oath” that Mr Johnson was warned in advance that gatherings were being planned but failed to act.

The one-time Government aide yesterday explained on his blog why he would not speak to Ms Gray. He wrote: “If we speak, the PM will invent nonsense and spin it to the media and you and I will both have problems.

“Let’s keep everything in writing, therefore he cannot invent things I’ve supposedly said to you, there is only a written record, this makes both our lives easier.

“She agreed. So I have answered questions in writing and will answer further questions in writing if she wants.” Mr Cummings went on to express misgivings about Downing Street overseeing the publication of Ms Gray’s report, claiming: “I know others are very worried about handing things to the Cabinet Office because they know the PM will see everything.”

He suggested that “many officials are desperate” to force out Mr Johnson.

Lib Dem Deputy Leader Daisy Cooper said: “Cummings’ decision not to speak to Sue Gray about the parties in No10 only serves to highlight again what a sham process this is, with the person in charge of the investigation unable to compel people to give evidence.”

Senior Tory MP David Davis, who last week called on Mr Johnson to go, said he was waiting for the outcome of the Ms Gray’s report before making a final decision on whether he thinks the PM should quit.

EU unity in jeopardy: Boris to offer vaccines to Ireland in ‘poke in the eye’ to Brussels