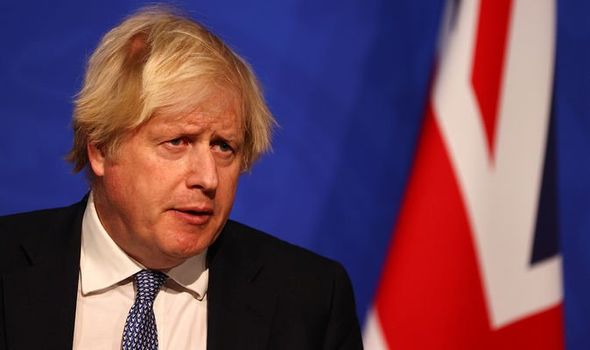 Boris Johnson ‑ who became a father again yesterday after his wife Carrie had a baby girl ‑ must navigate between Conservatives in open opposition to his Plan B Covid restrictions and scientists who warn far tougher measures will be needed to curb the Omicron surge. He is under fire over Government staff Christmas parties allegedly held in lockdown and he has now been accused of lying as controversy resurfaces over the funding for a lavish renovation of his Downing Street flat.

Mr Johnson will no doubt enjoy some time with his family after the birth of his new baby.

But he faces the biggest Commons rebellion since his 2019 general election ­victory, with dozens of backbenchers threatening to vote against his plans for compulsory Covid passports.

But at the same time experts advising the Government say tougher coronavirus rules could be needed in a bid to prevent the Omicron variant from overwhelming the NHS.

Plan B restrictions mean Covid passports for some venues, masks to become compulsory in most public indoor venues and working from home if you can.

It means Britons could face last-minute Christmas curbs for the second year running, following muted ­celebrations in 2020 because of the virus threat.

No 10’s Scientific Advisory Group for Emergencies yesterday warned an Omicron wave could be the worst yet, despite the vaccines.

“What happens next? It’s pretty clear the virus hasn’t done with evolution. It’s going to continue to evolve.”

Prof Edmunds said he was in favour of restrictions to tackle the current wave.

He said: “Unfortunately, if we wait until we see significant numbers of cases in hospitals it will be far too late to act.

“I think it’s a necessary evil. It’s very damaging for parts of the economy, the hospitality sector, retail sector in particular, they’re going to be affected. Unfortunately, we have to do it.”

The UK Health Security Agency yesterday reported that 249 additional confirmed cases of the Omicron variant had been reported ‑ the highest daily rise so far, bringing the total to 817.

Government scientists insist it is already in every corner of the country and is doubling every two to three days.

But the Agency confirmed yesterday it was not aware of anyone who had been hospitalised with the Omicron variant so far.

The University College London professor believes the Government’s latest measures will “slow the spread” of the super-strain. But the measures are “not going to turn around” the looming wave of cases and hospitalisations.

Prof Hayward said: “It’s a bit like if you think of a month’s worth of rain falling in a few days, that leads to flooding and it’s a similar type of scenario.

“We can reduce that by reducing social mixing and allowing time to slow the virus down and get vaccines into more people’s arms.

“I think you would need much more severe restrictions to turn it around, but I think the encouraging thing is we’ve started to see, through some of the laboratory data, that third dose of vaccine is really providing much better immunity. Whereas just with the two doses, it’s not really so good.

Prof Hayward stressed that it was “difficult to predict” whether the measures would be sufficient to slow the spread of the disease.

At Westminster, the backlash against the Prime Minister’s Plan B was growing yesterday.

Senior Tory backbencher Marcus Fysh described plans to bring in Covid health certificates as “really draconian” and “a massive imposition on our liberties”.

He added: “It’s a disgrace that they’re pursuing that, utter disgrace.”

Mr Fysh accused Government scientific advisers and England’s chief medical officer Professor Chris Whitty of having a “history of over-egging the data and picking data points out that suit their narrative”.

Former minister Steve Baker, a prominent figure in the Covid Recovery Group of Conservatives, said it is “vital” the “maximum number of Conservative MPs vote against Plan B”.

In a message to would-be rebels, the PM’s spokesman said: “I simply would make the point that we do know [the effect of Omicron].

“And the advice that we have received, without action ‑ given the incredibly fast growth rate of this variant ‑ the consequences in terms of hospitalisations and deaths could be severe.”

Health Secretary Sajid Javid defended Plan B yesterday, pointing out reports that Omicron is doubling every two to three days.

He said: “It would mean, at that rate, by the end of this month we could hit about one million infections in the community throughout the UK.

“We’ve always been clear that should the data change and should it move in the wrong direction and it looked like the NHS might come under unsustainable pressure, we would act and implement Plan B.

“I don’t enjoy doing that, no one does. It is a very difficult thing for many people, asking them to work from home or wearing face masks and things, it has a real impact on our liberties.

“But I hope that people will understand that by taking decisive action now, we can potentially avoid action later.”

But it was the fifth time in the past week that cases have topped 50,000. Meanwhile, daily deaths were up five percent with 148 more victims.