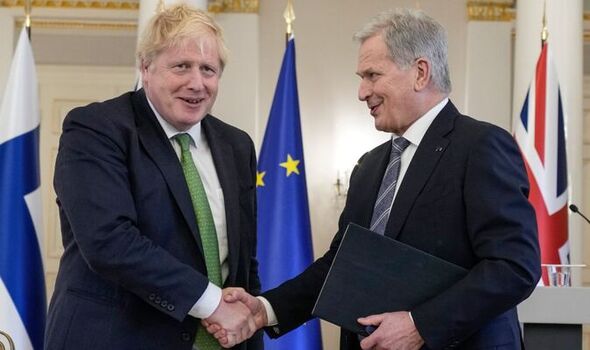 The pacts could see British troops sent to the Nordic nations in the event of a Russian invasion.

The Prime Minister said parallel agreements would provide defence for each country should they come under threat at any time.

He promised the UK would come to Finland’s aide, including with military support, if the country is ever attacked.

Mr Johnson held a press conference in Helsinki alongside Finnish president Sauli Niinisto, and when asked if there would be “British boots on the ground” on Finnish territory during a “possible conflict with Russia”, he replied: “I think the solemn declaration is itself clear.

“But the nature of that assistance will of course depend upon the request of the other party.

“But it’s also intended to be the foundation of an intensification of our security and our defence relationship in other ways as well.”

Earlier today, the Prime Minister met Swedish counterpart Magdalena Andersson and insisted the UK “will not hesitate” to act in the event of an attack on the country.

Speaking alongside the Swedish leader at her Harpsund country retreat, he said: “The many carcasses of Russian tanks that now litter the fields and streets of Ukraine, thanks to Swedish-developed and British-built NLaws (anti-tank weapons), certainly speak to how effective that co-operation can be.”

“Most importantly, this is an agreement that enshrines the values that both Sweden and the UK hold dear, and which we will not hesitate to defend.”

Mr Johnson then firmly stepped on the accelerator as he launched a blistering attack against Russian President Putin.

He told the press conference: “This week, many of us have been paying tribute to the brave men and women who secured victory and peace in Europe 77 years ago.

“So it’s a sad irony that we’ve been forced to discuss how best to fortify our shared defences against the empty conceit of a 21st century tyrant.”