Brexit talks did not move swiftly forward this week, EU negotiator Michel Barnier has said, adding that he is “disappointed” with the progress of the negotiations.

The EU’s Brexit negotiator accused the UK of showing “no willingness” to compromise on the bloc’s priority areas in order to agree a trade deal before the end of the year.

“Too often this week it felt as if we were going backwards more than forwards,” he said after the seventh round of talks between the two sides ended. 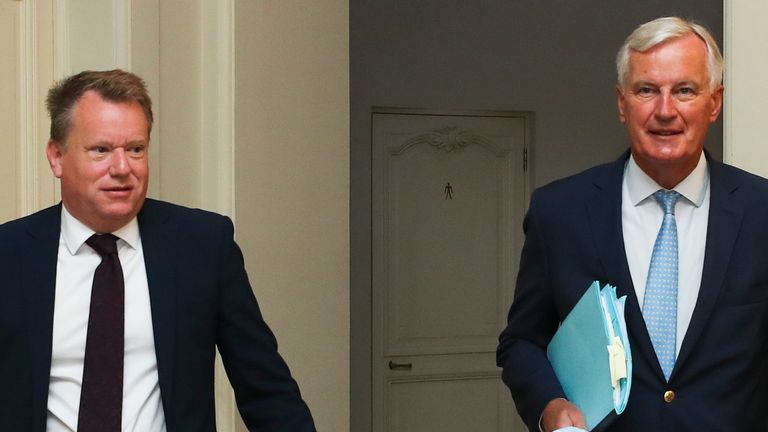 UK negotiator David Frost said that while the latest negotiations in Brussels had been “useful”, there had been “little progress”.

“Agreement is still possible, and it is still our goal, but it is clear that it will not be easy to achieve,” he said.

The next round of talks will begin in London on 7 September.

Britain left the EU in January after 47 years of membership and is currently in an 11-month transition period, which means it is continuing to follow the bloc’s rules and regulations.

This time frame is being used to negotiate a free trade agreement and sort out the terms of the future relationship that will govern ties between the UK and the EU in the future.

Both sides have said a deal needs to be agreed by October in order for it to be ratified in time.

Earlier this summer, Prime Minister Boris Johnson formally told the EU that he would not be extending the transition period beyond the end of this year.

If the transition ends without a deal being struck, the UK will likely have to trade with the EU on World Trade Organisation terms from next year.

Mr Barnier said that at this stage a deal “seems unlikely”, adding: “On the European side, we are very concerned about the state of play in our negotiations. The clock is ticking.”

He said the issue of a level playing field is “not going to go away” and there had been “no progress whatsoever” on one of the main sticking points, the issue of fisheries.

“We hear the British government’s concern about maintaining its sovereignty and its regulatory autonomy and we respect that, clearly,” Mr Barnier told a news conference.

Mr Frost said Brussels was making the discussions “unnecessarily difficult” by “insisting” on the UK signing up to the EU’s state aid and fisheries policies.

Chief negotiator David Frost accused the EU of making negotiations “unnecessarily difficult” by “insisting” the UK must sign up to the bloc’s state aid and fisheries policy.

“The EU is still insisting not only that we must accept continuity with EU state aid and fisheries policy, but also that this must be agreed before any further substantive work can be done in any other area of the negotiation, including on legal texts,” he said.

“This makes it unnecessarily difficult to make progress.”

Mr Frost added that there are “other significant areas which remain to be resolved”, declaring: “Time is short for both sides.”

And a senior UK negotiating official hit back at the EU’s accusation of time-wasting, saying: “The process block now is the EU’s insistence that we must accept their position on state aid and fisheries before we can talk about anything else.

“Obviously we’re not going to do that. So it’s frozen.”

Be prepared: Joe Biden transition team at work amid limbo