The country’s Taoiseach Micheal Martin met Prime Minister Mr Johnson is Belfast on Thursday, and is confident there is a “landing zone” for Brussels and London to strike a Free Trade Agreement before the end of the transition period on December 31. Mr Martin said: “I think where there’s a will, there’s a way. It seems to me that there is a landing zone if that will is there on both sides and I think it is, on the European Union side and on the British side to find that landing zone.

“My own gut instinct is we both understand that we don’t need another shock to the economic system that a no-deal Brexit would give or a sub-optimal trade agreement would give to our respective economies across Europe, Ireland and of course within Great Britain itself alongside the enormous shock that Covid has already given.”

The Taoiseach is hopeful for a “productive outcome” when Brexit negotiations resume between the two sides next week.

Mr Johnson told his Irish counterpart Mr Martin he is determined to reach a trade deal with the EU, but warned he would not relent on the issue of level playing-field commitments.

A spokesman for the Prime Minister said following the meeting in Northern Ireland: “He underlined that the UK was not willing to make level playing-field commitments that went beyond those normally found in a Free Trade Agreement, such as the EU’s agreement with Canada.” 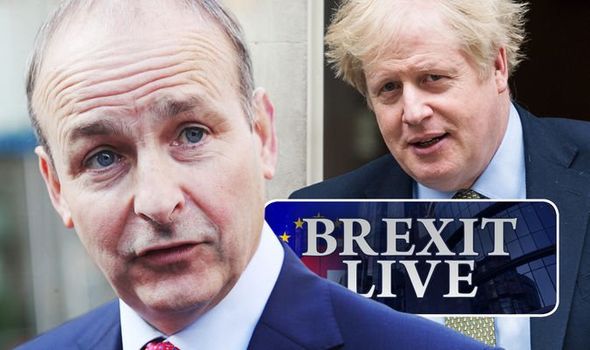 The next round of Brexit talks begin in Brussels on Monday between Mr Johnson’s chief negotiator David Frost and EU counterpart Michel Barnier.

In a tweet, Mr Frost, who was not at the meeting in Northern Ireland, said: “We go in good faith to talk constructively about all the issues.

“Our assessment is that agreement can be reached in September and we will work to achieve this if we can.”

How your MP voted on Theresa May's Brexit deal