Home » Politics » Brexit LIVE: Boris Johnson puts chance of deal at 30% – and the problem is NOT fish quotas

The EU’s chief Brexit negotiator Michel Barnier has warned British counterpart David Frost a deal must be agreed by the end of October to be ratified by the European Parliament in time for the end of the transition period on December 31. If no deal is agreed, London and Brussels will fall back to trading on World Trade Organisation (WTO) terms – adding potentially huge tariffs to a range of exports, including fish. But the UK’s desire to use state aid to bulk up its technology sector means the Boris Johnson’s top team are unwilling to budge in negotiations on this crucial red line, which continues to be a major stumbling block in trade talks.

James Forsyth, the political editor of The Spectator, wrote in a column for The Times: “The chances of a Brexit deal have receded significantly over the summer.

“Inside No 10, they now think there is only a 30 to 40 percent chance that there will be an agreement.

“The sticking point isn’t fish — I’m told that there is a “deal to be done” there — but state aid, the question of how much freedom Britain should have to subsidise companies and industries.”

The Prime Minister does not want to agree to any new state aid rules with the EU that would prevent the Government from actively investing in the technologies of the future – a plan that puts him on a direct collision course with Brussels. 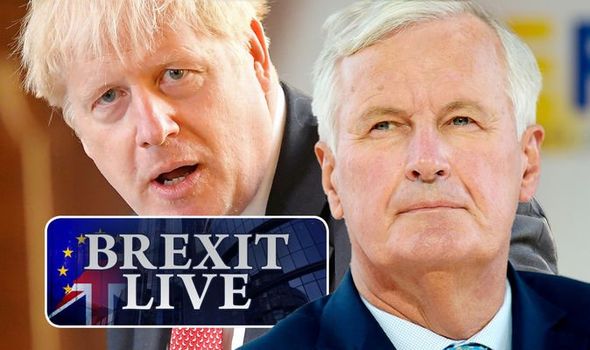 Mr Barnier has repeatedly warned he will not agree to any deal until the UK details an acceptable state aid regime that would not allow its own firms a competitive advantage over their EU counterparts.

Fishing also continues to be a huge sticking point in trade talks, with Britain wanting the percentage of quotas reserved for UK vessels in its waters doubled from 25 percent to more than 50 percent.