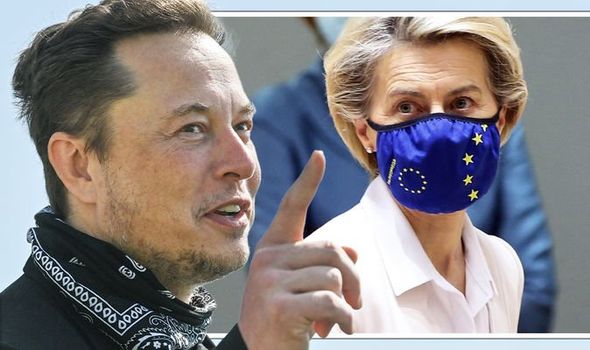 Brussels is seeking to massively increase its production of computer chips by quadrupling its semiconductor production in just eight years under its “Chips Act”. But reports suggest EU legislation will have just over five billion euros set aside for the project – less than 15 percent of the expected cost – with other projects expected to be taken from. Responding to the news on Twitter, Tesla CEO Elon Musk said the bloc should drop the act altogether, suggesting it was “not needed”.

Tesla CEO Elon Musk has mocked the EU over expensive plans to massively increase its production of computer chips.

The bloc is struggling to gather the required funding for the project, with less than 15 percent of the expected cost reported to have been earmarked through legislation.

Bloomberg diplomatically described the struggle as a matter of “budget reality”.

For Mr Musk, the project was simply “not needed”.

If Brussels moves ahead with its plans, it is expected other existing projects could be cut to help fund them.

Barr Bridges the Reagan Revolution and Trump on Executive Power