In a historic moment in British politics, MPs will finally vote for the first time on legislation to take the country out of the European Union, with a new agreement in place. But Boris Johnson could be facing more huge headaches with the 110-page bill document published last night riddled with potential hurdles for the Government. A powerful group of ex-Tory rebels are likely to demand the Government grants MPs a guaranteed vote on whether to extend the Brexit transition period in return for their support in tonight’s crunch votes.

Senior MPs from the Liberal Democrats, SNP and DUP are in frantic talks with Jeremy Corbyn’s senior lieutenants as they plot the downfall of the bill.

Tory whips have huge concerns they could lose the programme motion vote, which will be formally opposed buy every other party, meaning ministers will have to reply on as many as 20 pro-Brexit Labour or independent MPs to bail them out.

Despite this, Downing Street remains quietly confident of winning the second reading vote with the support of rebel Labour MPs and most of the 21 ex-Tory independents, according to Playbook, but one senior official said: “It’s going to be contentious, and tight.”

One opposition party MP also told Playbook: “I’ve never seen anything like this for a bill this contentious. It’s going to be f***ing brutal.” 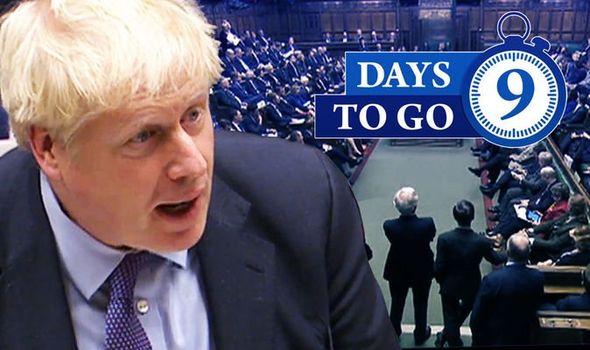 Boris Johnson has published the EU Withdrawal Agreement Bill which will be debated by MPs today.

It is 110 pages long, with 124 pages of explanatory notes, and MPs have been given until Thursday to scrutinise it and vote on it.

The Withdrawal Agreement Bill (WAB) includes a provision to enable Mr Johnson’s Brexit deal to be ratified in time for the UK to leave with an agreement on October 31.

MPs have been given until Thursday to scrutinise it and vote on it.

The Withdrawal Agreement Bill (WAB) includes a provision to enable Mr Johnson’s Brexit deal to be ratified in time for the UK to leave with an agreement on October 31.

Under the provisions of the Constitutional Reform and Governance Act (CRAG), an international treaty – such as the Brexit deal – must be laid before Parliament for at least 21 sitting days before ratification to take place.

Boris Johnson will MPs ahead of the vote: “I hope parliament today votes to take back control for itself and the British people and the country can start to focus on the cost of living, the NHS, and conserving our environment.

“The public doesn’t want any more delays, neither do other European leaders and neither do I.

“Let’s get Brexit done on 31 October and move on.”

Boris Johnson’s Brexit deal will pass through the House of Commons by just five votes without MPs forcing him into a customs union with the EU or holding a second referendum, analysis from the Financial Times suggested.

Based on a forecast of voting intentions from MPs, the Prime Minister would secure a slender victory, with 320 expected to vote for his deal as to 315 opposing it.

8.12am update: What hurdles does Boris Johnson face?

The Prime Minister could be dealt a huge early blow if MPs refuse to back the bill itself, and could also oppose the frantic timetable as Mr Johnson desperately tries to deliver Brexit by October 31.

He could win both of today’s votes and still be faced with more problems.

MPs could potentially table amendments to attach to the bill, which could include calling a second referendum or for the UK to remain in the EU’s customs union.

Both of these would wreck Mr Johnson;s plan and renew the Government’s push for a general election, which has been rejected twice by the Commons over recent weeks. 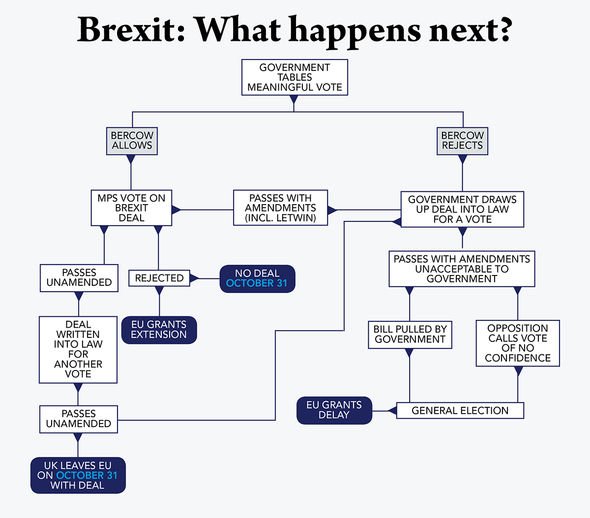 8.03am update: What happens next if the Government wins?

The next stage of the Brexit debate would begin imminently if the Government secures victory on the second reading and program motion.

This evening’s three-hour “committee stage” debate would focus on arrangements around the transition period after Brexit.

Wednesday would see a mammoth 12-hours of debate take place, which could see the House of Commons sit until the early hours of the following morning.

A further eight hours of debate would then follow on Thursday, with the final vote on the third reading taking place later that evening.

The bill would then move through to the House of Lords.

7.58am update: What happens next if the Government loses?

It would be the end of Boris Johnson’s deal this side of a general election or another prorogation should the Government be defeated on the second reading vote this evening.

The same bill cannot also be brought forward twice in the same sitting.

There would be two choices facing the Government if they lose the program motion vote.

They could either abandon the bill and say they had no choice to make a renewed push for a general election, or present a new timetable for ratification of the deal.

7.50am update: What will happen today?

MPs will begin debating the Brexit deal bill in the House of Commons at 12.30pm if there are no urgent questions prior to this.

A second reading vote on the legislation, which would mean MPs have supported the bill in principle, will take place at 7pm.

That will be quickly followed by a vote on the Government’s accelerated timetable – the program motion vote.

Should Boris Johnson clear these hurdles, there will be votes on amendments that could still pose a huge threat to his deal.

The Rapture and the Real World: Mike Pompeo Blends Beliefs and Policy