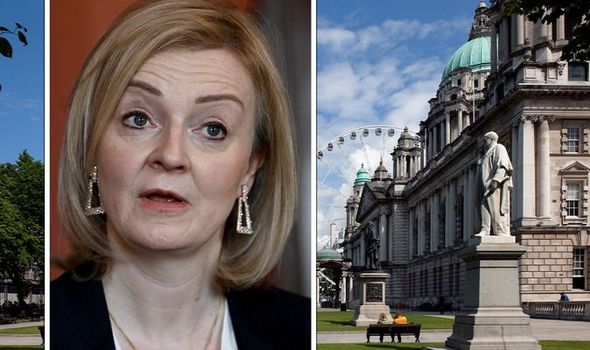 The Foreign Secretary and chief Brexit negotiator said she hopes to secure major changes by the end of the month. She said: “I want to make significant progress by February. That’s important. But it’s important that we secure the support of all the communities in Northern Ireland, including the unionist community.” It comes as the EU was left reeling by claims from Stormont’s First Minister that the DUP would act unilaterally to halt Brexit checks at Northern Ireland ports. Paul Givan said party colleague Edwin Poots will order a stop to the controversial checks after a failed bid to secure the wider approval of the Stormont Executive to continue them.

Brexit Britain has been hailed for securing two multi-million pound injections in 24 hours, which have been described as a “vote of confidence” in the post-Brexit economy.

Multinational investment banking giant Citi launched a £100million overhaul of its 42-floor Canary Wharf tower, despite foreign banks having been expected to leave London as a result of Brexit.

James Bardrick, head of UK at Citi, said the investment showed the bank’s commitment to London for “25 years and beyond”.

And in a second win for Brexit Britain, luxury car maker Bentley unveiled a £2.5billion investment in Crewe as part of a plan to build its first fully electric car.

Liz Truss’ threat to invoke Article 16 has been “diminished” as Lord Frost had already taken “much of the heat away”, an expert has claimed.

He told Express.co.uk: “The likelihood of Article 16 being triggered has diminished.

“This already happened before Frost left.

“That may be why he left but the reasons he gave were somewhat different.

“I think he gave the Covid regulations as one of his reasons for resigning.

“But he also criticised the Brexit that Boris Johnson was pursuing.”

Good morning from London. I’m Tara Fair, I’ll be bringing you all the latest developments on Brexit for the next eight hours. Please feel free to get in touch with me as I work if you have a story or tips to share! Your thoughts are always welcome.

Trump forced to play defense in swing states like Iowa