The Prime Minister managed to convince the President of the Commission to backtrack on triggering Article 16 of the Northern Ireland Protocol during tense talks this weekend. He warned that blocking exports would prevent British pensioners getting a second dose of the Pfizer jab, which is said to be what convinced the EU into making a U-turn. A senior Government official told The Sunday Times: “Things got pretty spicy.

“The important thing was establishing with confidence that there would be no issue in relation to people needing their second jabs.

“They need the safety and security of knowing they will get another.

“His job on that call was to get her to agree that point.”

Vaccines minister Nadhim Zahawi has now said Britain is ready to help the EU with its vaccine production problems. 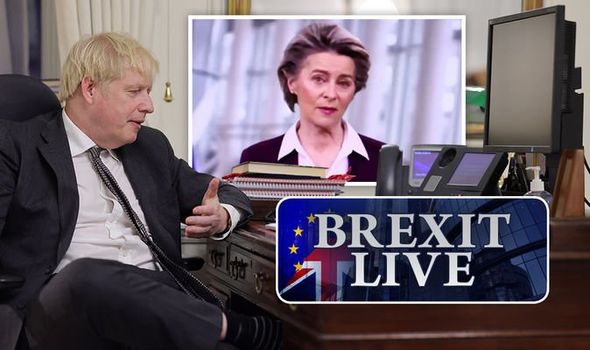 He told the Telegraph: “This is about collaboration, which is why we went out of our way to help with the production challenges in Holland that they were facing before Christmas and will continue to do so.”

It comes as Britain is officially marking its first anniversary of leaving the bloc.

The UK spent months negotiating a trade deal with the EU last year before reaching an agreement at the eleventh hour before the transition period ended one month ago.

Hans-Olaf Henkel said Brussels was paying the price for its dogmatic insistence on rolling out the vaccine across Europe in a uniform fashion, a decision he suggested had undoubtedly cost lives.

European Commission President Ursula von der Leyen and her colleagues on Friday sought to trigger Article 15 of the Northern Ireland protocol as a result of its row with AstraZeneca over shortfalls in COVID-19 jabs, in a move described by Northern Ireland First Minister Arlene Foster as “an incredible act of hostility”.

Mr Henkel, who stepped down from the European Parliament in 2019, told Express.co.uk: “If the EU feels that AstraZeneca treats them unfairly it should exploit the normal legal routes against the company and not punish those Governments which were able to negotiate better conditions, higher quantities and faster deliveries.”

In opting take such a drastic step, the EU had gone against its own principles, Mr Henkel said.

Parliament: Auxiliary police officers and retired cops may be tapped to conduct fire inspections for SCDF