Home » Politics » Brexit LIVE: ‘We will not be seduced!’ EU slaps down Truss masterstroke hours before talks 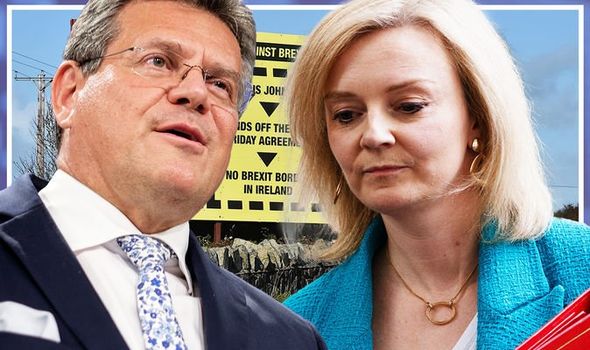 The UK foreign secretary will resume talks between the British Government and the EU after taking over from her predecessor Lord Frost, who resigned late last year. Ms Truss has opted for a warmer approach and has invited Maros Sefcovic, the EU’s Brexit commissioner, to discuss the issue at a mansion in Chevening, Kent, with the promise of “constructive proposals” to break the deadlock. While the EU has welcomed this new approach, one official close to the talks sniped: “We will not be seduced by a night in a country house.” Officials on both sides admit their positions on how to proceed with border checks in Northern Ireland remain very different.

Liz Truss’s assertion that she will be willing to trigger Article 16 if she must has been branded “unhelpful” by the EU ambassador who has urged her to stop “agitating” the issue.

Writing in the Sunday Telegraph, the foreign secretary and newly appointed Brexit negotiator said she remains “willing” to trigger the mechanism contained in the Northern Ireland protocol if needed.

Reacting to her comments, Joao Vale de Almeida told Sky News: “We’ve heard this before from the government, so we’re not surprised. We are not too impressed.

“We still believe it’s not very helpful that we keep agitating the issue of Article 16.

“I think what we should focus on – at least that’s where we are focused on – is trying to find solutions for difficulties in the implementation of the protocol.”

Why roaming charges now don’t apply to some users – is your network affected?

Roaming fees are due to be introduced this year for Brits travelling to Europe, but some firms have announced that they will not ask customers to pay the charge.

As a result of Brexit, mobile phone operators in 2022 will be re-introducing roaming fees for UK residents who use their mobiles in Europe.

The rule is one of several that are coming into force in the New Year, along with measures surrounding new post-Brexit customs regulations.

However, some networks have recently announced they will not be following the trend and issuing roaming charges to their customers – is your network one of them?

Boris savaged as he fails to break free from EU rules

The Prime Minister has been savaged over the handling of the British economy in terms of inflation and increasing growth, with one MP suggesting his policies are “like a Maastricht tribute act.”

The news comes as the economic growth was slower than first thought, even prior to the arrival of the Omicron variant of the COVID-19 virus which has also cast doubt on the economy.

The Office for National Statistics (ONS) said during the quarter before Omicron took hold, the economy grew by 1.1 percent, rather than 1.3 percent, as Britain emerged from lockdown.

He said: “Yesterday I asked the government why the new economic policy rules look just like the EU rules we used to obey.

“Looks like a Maastricht tribute act. We need to make controlling inflation and speeding growth the central aims.”

Liz Truss has boosted hopes of a trade deal with India, the world’s second-most populous country, which experts say could be worth up to £100billion, after talks with opposite number Dr Subrahmanyam Jaishankar.

Remoaner fears over Brexit have been mocked yet again after an image was shared to social media showing empty shelves in the US.

A picture was shared of a supermarket with empty shelves in Washington DC.

Another user named Julian also commented on a separate post from Australia.

In the second image, a Twitter user named Checkmate.btc, shows a picture of empty shelves without vegetables or meat.

In response Julian said: “And Australia too.”