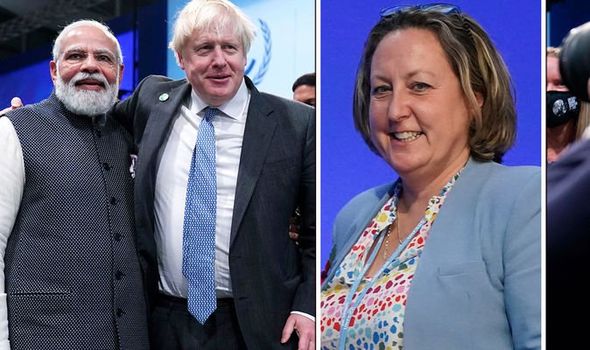 The confirmation of a potential free trade agreement, aimed to be signed by the end of the year, follows a day of talks in New Delhi. A deal with India is one of the UK’s post-Brexit priorities as it looks to tighten its relations with fast-growing economies. Mr Johnson called it a “historic partnership”.

The Prime Minister said: “Today we launch negotiations on an ambitious free trade deal with India – one of the world’s biggest and fastest-growing economies.

“As we take our historic partnership to the next level we will create jobs, increase wages and drive innovation across the United Kingdom.”

The agreement could increase trade by billions of pounds by almost doubling British exports to India.

International Trade Secretary Anne-Marie Trevelyan, who described the prospect of a free trade deal with India as “a golden opportunity”, said: “This is an opportunity that we must seize to steer our partnership along the track of mutual prosperity for the decades to come.”

India is on course to become the world’s third-largest economy by 2050.

So, the Government’s work on a trade agreement with the nation of 1.38 billion is not only set to be its biggest negotiation of 2022 but one very much welcome by Brexiteers who look at the EU’s failure to strike something similar after trying for years with India. A year since the UK left the bloc, the news is expected to be celebrated as a Brexit success.

Oh dear, Angela! Merkel’s Covid strategy dismantled by her OWN aide: ‘The race is lost’

Nigel Farage warns Biden will be ‘very, very bad’ for Brexit as he ‘loves the EU’