The Foreign Secretary told the House of Commons that the UK Government will do everything they can to make sure Britain is not receiving goods from China’s Xinjiang province. The area has been at the centre of reports claiming Beijing installed a series of forced labour camps for members of the Muslim Uyghur minority. The Deputy Prime Minister also warned UK businesses of the potential consequences as a result of supporting the enforced labour in China.

Mr Raab said: “The Government will conduct an urgent review of export controls as they apply specifically geographically to the situation in Xinjiang.

“This is to make sure that we are doing everything that we can to prevent the export of any goods that could directly or indirectly contribute to human rights violations in the region.

“This package put together will help make sure that no British organisation, Government or private sector deliberately or inadvertently are profiting from or contributing to human rights violations.

“The overwhelming majority of British businesses would not dream of it, today’s new regulations will penalise any reckless business that does not take those regulations seriously.” 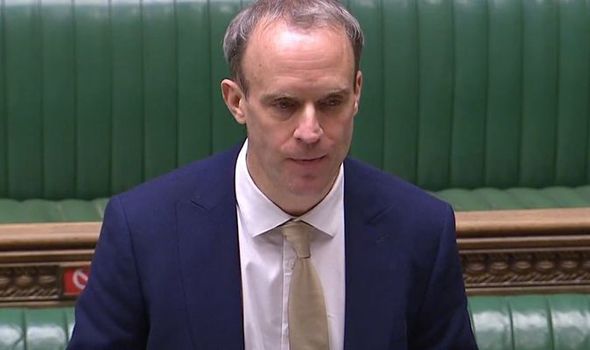 A Foreign Office spokesman stated: “Our approach to China is rooted in our values and interests.

“However, where we have concerns, we raise them and hold China to account.

“We have done this consistently over the treatment of Uighur Muslims in Xinjiang.”