Home » Politics » Citing Economy, Trump Says That ‘You Have No Choice but to Vote for Me’

MANCHESTER, N.H. — President Trump doubled down on his economic argument for re-election on Thursday night amid increasing concerns about a recession, declaring that even Americans who hate him “have no choice” but to vote for him because otherwise the stock market will collapse.

With markets already wobbling over fears of a slowdown amid an escalating trade and currency war with China, Mr. Trump flew to a battleground state to defend policies that are rattling many businesses and investors and to insist that he will prolong the country’s decade-long economic expansion into a second term.

Even as he derided Ms. Warren, a senator from next-door Massachusetts and a Democratic presidential candidate, with a racial slur, Mr. Trump acknowledged the deep antipathy many voters have for him but made the argument that they should put aside their distaste for their own economic well-being.

“You have no choice but to vote for me because your 401(k), everything is going to be down the tubes,” he told the crowd. “Whether you love me or hate me, you’ve got to vote for me.”

In resting his case for a second term on the health of the economy, Mr. Trump underscored the political consequences of the economic turmoil that has played out in recent days. In private, he has expressed his own anxiety about the economy taking a dive, knowing that his electoral fortunes are likely tied to it, even as he vents frustration that his opponents in his view are overstating the troubles.

American stock markets fell by about 3 percent on Wednesday amid indications that the global economy could slow down before shares rebounded slightly on Thursday. Mr. Trump lashed out at those questioning his confrontation with China, including the conservative editorial page of The Wall Street Journal.

The Journal’s editorials “demonstrate that they understand nothing about trade or business,” he said. “Nothing. They advocate only economic surrender. They actually say go to China, take off the tariffs, make a deal. I lose all the cards, we take off the tariffs. We don’t have any cards.”

His speech was at times a greatest hits album of favorite lines, replaying the 2016 campaign against Hillary Clinton and bashing the news media, Democrats and America’s allies in Europe. Typically rambling, veering on and off script seemingly at random over an hour and a half, he repeated points he had already made earlier in the evening as if he did not remember already making them.

His talk was also marked by repeated inconsistencies. The same president who last year said trade wars were “easy to win” told his supporters that “I never said China was going to be easy.” The same president who compared America’s intelligence agencies to “Nazi Germany” when he took office complained that Democrats “use the term Nazi” to attack their opponents.

At one point, when a protester disrupted the speech and was escorted out of the arena, Mr. Trump belittled the man’s physical appearance. “That guy has a serious weight problem,” he said. “Go home, start exercising!” Then he shifted back to his prepared text to say that his campaign was about “love.” 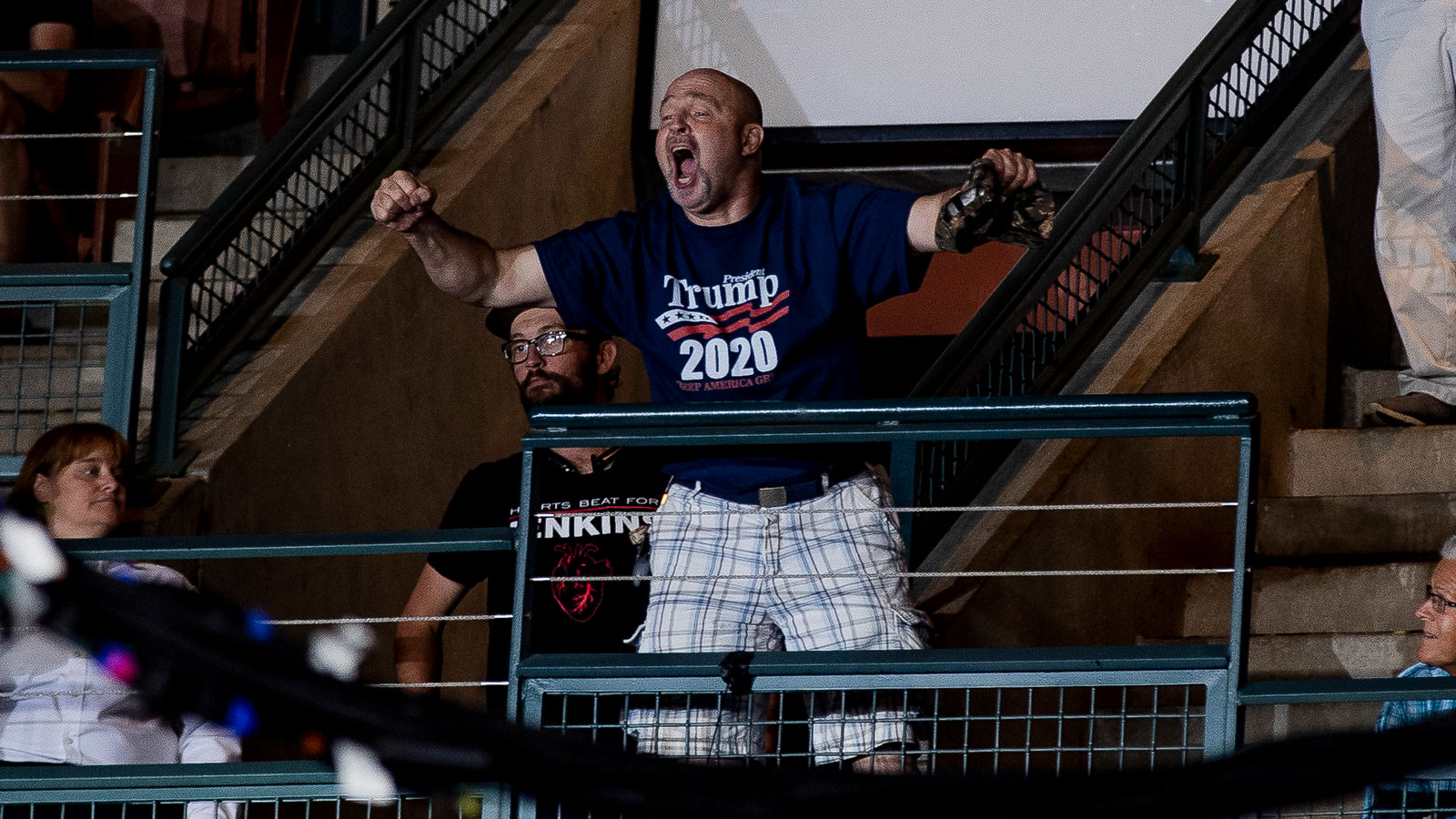 As he made his case for his economic stewardship, which polls show is perhaps his biggest political asset, he boasted, “Hey, you got low interest rates, the lowest ever.” He made no mention of his regular attacks on the Federal Reserve for keeping interest rates too high.

New Hampshire, which Mr. Trump narrowly lost in 2016, is a state where the economic argument may not resonate the same way it does in other places. Its unemployment rate had already fallen to 2.8 percent under President Barack Obama and has since ticked down to 2.5 percent.

Even as the president argued that he had helped New Hampshire, he all but endorsed Corey Lewandowski, his former campaign manager, if he ends up running against Senator Jeanne Shaheen, a Democrat, next year.

“He’s tough and he’s smart and I’m hearing he’s thinking about running for the Senate from New Hampshire,” Mr. Trump said. “I don’t know. I think it’d be tough to beat.”

Mr. Lewandowski has not announced his candidacy and no decision is imminent, according to a person working with him. In June 2016, Mr. Trump fired Mr. Lewandowski at the urging of his children, but the president has retained a fondness for him and speaks with him often.

Before his ouster, Mr. Lewandowski helped Mr. Trump notch his first primary victory, in New Hampshire, which helped vault him to the Republican presidential nomination. Mr. Lewandowski would hope to run on the same outsider energy that Mr. Trump channeled that year.

At the same time, Mr. Lewandowski has significant vulnerabilities. On Thursday, hours before the Trump rally, the House Judiciary Committee subpoenaed him in relation to the report by the special counsel, Robert S. Mueller III. His opponents would be almost certain to raise questions about his business activities since Mr. Trump took office.

Gov. Chris Sununu of New Hampshire, a Republican who is up for re-election next year, has told the White House he has concerns about the effect that Mr. Lewandowski’s candidacy could have on others on the ballot, according to two people briefed on the discussions.

The rally in Manchester, a southeastern city of 110,000, drew people from several nearby states. At the front of the line to get into the rally, a cluster of people who had been there from the night before agreed that the president’s stance on immigration was a key reason they would be voting for him again in 2020.

“Illegal immigrants impact every community,” said Nena Alexandra, 20, from Easthampton, Mass. “That goes for every single family in the United States.”

But even among the die-hards at the front of the line, there was some detectable unease as the stock market reeled. Kevin Steele, 40, a self-described Democrat for Trump, said he hoped that Mr. Trump’s trade war would be over soon.

“Listen,” Mr. Steele, who is unemployed and lives in Scranton, Pa., said, “I’m hoping to God he closes with China. Just get the deal done. All of my money’s in stocks.”