Boris Johnson has promised to introduce legislation to protect renters from eviction amid the coronavirus pandemic – and said further decisions on schools will be taken “imminently”.

The prime minister said the government was overseeing steps that were “unprecedented in peacetime and unprecedented in the last century” because of the COVID-19 outbreak.

This includes advising people to work from home if possible and avoid pubs, clubs, restaurants and theatres.

As well as telling people to dramatically reduce their social contact, the government has pledged unprecedented measures to support businesses and families, including government-backed loans worth £330bn.

But critics have accused the PM of not going far enough and of doing little to help those in the private rental sector.

The issue was raised by Labour leader Jeremy Corbyn in the Commons during a sparsely-attended Prime Minister’s Questions.

“Yesterday, the chancellor unfortunately offered nothing to the 20 million people living in rented homes, including three million households with children,” Mr Corbyn said. 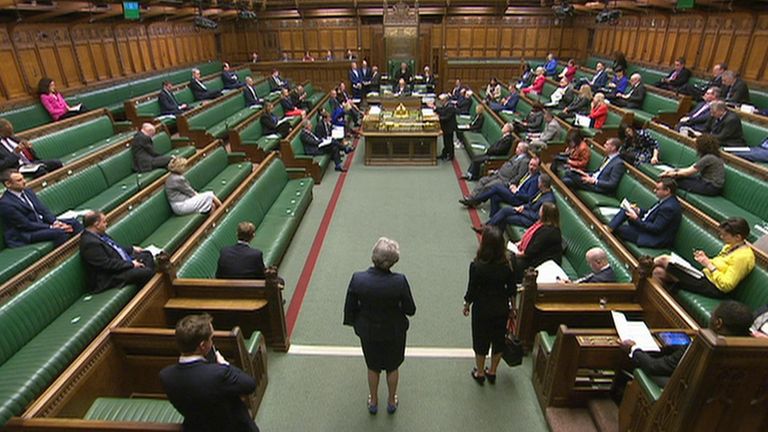 “They’re worried, they’re worried sick that they can’t pay their rent if they get ill, lose pay or feel they need to self-isolate.

“It is in the interests of public health, of the health of all of us, that people don’t feel forced to go to work in order to avoid eviction when they know themselves they may be spreading this terrible disease.

“So will the prime minister now confirm that the government’s emergency legislation will protect private renters from eviction?”

Mr Johnson replied: “I can indeed confirm that we will be bringing forward legislation to protect private renters from eviction, that is one thing we will do, but it is also important as we legislate that we do not simply pass on the problem, so we’ll also be taking steps to protect other actors in the economy.”

The PM added that further measures would be introduced to protect the vulnerable and those who face job losses.

One measure taken early on in the outbreak was allowing workers to access statutory sick pay from the first day they are off ill, but Labour has demanded the weekly payment of £94.25 be increased to bring it in line with other European nations.

Mr Corbyn reiterated this demand at PMQs, telling the chamber that this was not enough for people to feed their families.

As a result, the Labour leader said, lives were being put at risk as people went out to work to “put food on the table”.

The PM did not address the issue of sick pay directly.

But he said: “It’s only right that when we’re asking people to take action to isolate themselves, whether they have the disease or a member of their household has the disease, if we’re asking the public to take steps which jeopardise businesses, causes people to risk losing their jobs, it’s absolutely right that whatever their circumstances we should ensure workers get the support they need.

“So in addition to the package of business support that the chancellor outlined yesterday, we will be working with the unions, working with colleagues across the House, we will be bringing forward further measures to support workers of all kinds throughout this crisis.”

Mr Corbyn said “generations to come” will judge politicians “on the actions we take now”.

“Our response must be bold and it must be decisive,” he told the Commons.

“The market cannot deliver what is needed, only collective public action led by government can protect our people and our society.

“And that collective action must not allow, must not allow the burden to fall most on those who lack the resources to come as happened after the financial crash.”

Despite schools in Wales and Scotland announcing they are closing from Friday, those in England are staying open for now.

The government has not ruled out closing them, but has stressed that the scientific evidence does not support such a course of action yet.

However, Mr Johnson hinted to MPs that this could soon change.

“We will do everything we can to remove burdens on schools and Ofsted is one in particular we can address,” the PM said.

“The House should expect further decisions to be taken imminently on schools and how to make sure we square the circle both of making sure we stop the spread of the disease but also making sure we relieve, as much as we can, pressure on our NHS.”

The PM also revealed that the UK is getting “much closer” to having a generally available test to determine whether someone has had coronavirus.

And responding to criticism from Mr Corbyn that the current level of 10,000 daily tests is “nowhere near even the number of people working in the NHS and the care sector”, Mr Johnson said the government is “moving up to” conducting 25,000 every day.

There is usually a raucous atmosphere in the Commons for the weekly clash between the PM and Labour leader, but the chamber was much emptier than usual.

MPs were told that only those with questions listed on the order paper should attend.

Mr Corbyn thanked MPs for their “responsible approach” in sitting a “suitable distance apart to avoid cross-fertilisation of this horrible disease”.

‘Funny for him to ask he quit!’ BBC host slams Davis over Johnson resignation U-turn