Home » Politics » Democrats’ 2020 Choice: Do They Want a Fighter or a Healer?

MASON CITY, Iowa — Senator Cory Booker glided into the state first, offering himself as a herald of peace in a northern Iowa church that advertised “radical hospitality” on its marquee. As a rainbow cracked the frozen sky outside, Mr. Booker spoke of restoring “grace and decency” and erasing “the lines that people think divide us — racial lines, religious lines, geographic lines.”

Senator Elizabeth Warren arrived soon after, still thrumming with the energy of a weekend announcement speech in Lawrence, Mass. Having vowed there to “fight my heart out” against government corruption and corporate power, Ms. Warren roused the crowd in snow-blanketed Cedar Rapids on Sunday not with bounteous optimism but a call to arms.

In the space of a weekend, the two Democrats mapped the philosophical and temperamental fork their party must navigate as it challenges President Trump in 2020. Down one path, Mr. Booker’s, lies a mission of healing and hope, with a campaign to bind up social wounds that have deepened in the Trump era. The other path, Ms. Warren’s, promises combat and more combat — a crusade not just to defeat Mr. Trump but to demolish the architecture of his government.

As much as any disputation over policy, this gulf defines the Democratic presidential field, separating candidates of disparate backgrounds and ideologies into two loose groups: fighters and healers.

And the 2020 primary, Democratic leaders say, could hinge on whether their voters are more determined to reunite a divided country or to crush Mr. Trump and his party.

Bonnie Campbell, a Democrat who served as Iowa’s attorney general, said Ms. Warren of Massachusetts and Mr. Booker of New Jersey vividly captured the two approaches. Praising Ms. Warren for her forceful economic critique and Mr. Booker for his forward-looking pragmatism, Ms. Campbell said there was thirst for both outlooks among Democrats — and sometimes within individual Democrats like herself.

“Honestly, I think there’s a bit of schizophrenia on what our message should be,” Ms. Campbell said. “You can be angry and passionate about what’s happened, and also recognize that the task ahead of us is to bring the country together. Either one of those messages will carry the day, or they’ll be blended together.” 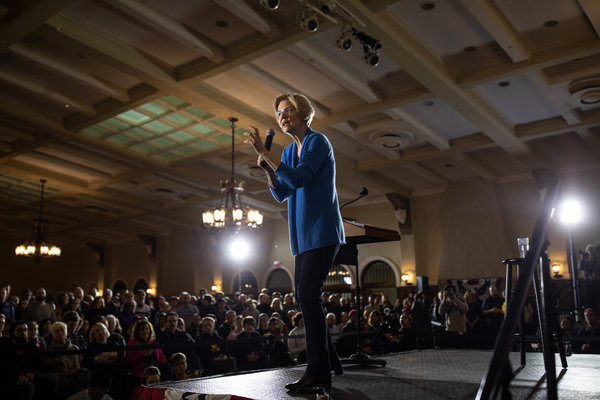 A range of blends is already available in the Democratic primary, with Mr. Booker and Ms. Warren representing the purest archetypes and their competitors arrayed on a spectrum between them. Senators Kamala Harris of California and Kirsten Gillibrand of New York entered the race last month on footing closer to Ms. Warren’s, with differing policy agendas but overlapping political vocabulary. Senator Bernie Sanders of Vermont, a fiery populist, is expected to join the fray soon, and perhaps Senator Sherrod Brown of Ohio.

[Check out the Democratic field with our candidate tracker.]

It is perhaps not an accident that the most confident Democratic tribunes of good feeling are all men, while the party’s sternest warriors are mainly women. In a contest for the presidency, a position traditionally viewed in martial terms, it may be easier for a man of Mr. Biden’s backslapping swagger or Mr. Booker’s athletic stature to show tenderness or vulnerability without fear of appearing weak.

And it was with enthusiastic physicality, and regular references to having played high school and college football, that Mr. Booker preached love and understanding. He clasped his chest and his face at moments of emotion, usually stirring murmurs of appreciation and sympathy; in one case, he wrapped his arm around a voter for a midspeech selfie. While Mr. Booker said he was ready to spar with Mr. Trump, stating matter-of-factly that “there is nobody in this race tougher than me,” his overarching theme was about reconciliation.

At an airy adult learning center in Waterloo, Mr. Booker insisted that the capacity to conquer all manner of hardships was within human reach — a contrast with Ms. Warren and other populists, who tend to describe ordinary people being stripped of power by big institutions.

“The most common way people give up their power,” Mr. Booker said, “is not realizing that they have it.”

Forces of darkness appeared in Mr. Booker’s political narrative — the country, he said, has a “cancer on our soul” — but there were few villains. Where malignant people intruded, Mr. Booker leavened their presence with humor: Strom Thurmond, the South Carolina senator who embodied virulent racism, became the subject of a laughter-inducing vocal impression. Describing how a racist white real estate agent directed a dog to attack his father, Mr. Booker added a punch line: Each time his father told the story, he joked, “that dog got bigger!”

At times, Mr. Booker’s calls for conciliation had an ideological subtext. He repeatedly detailed distinctions with the Democratic left, calling on progressives to “reclaim the fiscally responsible label” and denouncing corporate power selectively, focusing chiefly on consolidation in the agricultural sector.

Patti Downs, who went to hear Mr. Booker speak in Waterloo, said she believed he had the leadership abilities to be a good president. Ms. Downs said she was also eyeing Mr. Biden but already admired Mr. Booker for his bipartisan instincts and his attention to “everyday problems,” like wages and health care, rather than more abstract debates.

“We need more of that, and I think he might be the person to do it,” said Ms. Downs, a retiree who used to run a health care clinic. “I think maybe he can bring about the changes of civility, and bring politics down from that lofty place that most of us have no way to relate to.”

If Mr. Booker’s remarks projected the jaunty optimism of a marching band — his announcement video literally featured one — Ms. Warren’s echoed with cannon fire. In a hall at the Veterans Memorial Building in Cedar Rapids and during an afternoon rally at the University of Iowa, she drew roars of applause when pledging to “attack corruption head-on” and wrangle power from a set of named foes: drug companies, oil companies, student loan companies, private prison companies, gun companies and the National Rifle Association.

All, Ms. Warren declared, should be tamed through legislation and regulation.

Ms. Warren punctuated her rhetoric with a different set of gestures, pumping a tight fist for emphasis or slicing the air with an open palm; in Cedar Rapids, she closed by raising both hands overhead like a boxer soaking in applause.

Unlike Mr. Booker, Ms. Warren taunted Mr. Trump, urging Democrats not to build their 2020 message around him because he might not be president that long. “In fact,” she said, “he might not even be a free person.”

On Sunday, Ms. Warren made only a glancing reference to unity, cautioning a voter who raised the idea of impeaching the president that the process would divide Americans and that, if it came to that, Democrats must “help pull this country together.”

Cindy Garlock, a leader with the liberal activist group Indivisible Iowa who watched Ms. Warren on Sunday morning, said she had not picked a favorite but believed that Ms. Warren had a winning message. Ms. Garlock said she had also seen Mr. Booker during his visit but found Ms. Warren’s presentation — dotted with plans to raise taxes on the wealthy and crack down on pharmaceutical and student-loan companies — more convincing.

“She is a fighter, but I think that will also unite the country, if we’re fighting for the right purpose,” Ms. Garlock said. “Her purpose is to help regular people who are going to work every day, trying to pay their bills, which is the majority of this country.”

Both approaches have a rich history in Democratic politics, nationally and in Iowa — a state that has helped elevate conciliators like Jimmy Carter and Barack Obama to the presidency, while for decades sending prairie populists like Tom Harkin to Congress.

Mr. Booker shares a clear political lineage with Mr. Obama, who captured the Iowa caucuses in 2008 with a message of national unity. But the party has also shifted left since then, and has grown more suspicious of Republicans who harried Mr. Obama and elected Mr. Trump. In 2016, Mr. Sanders nearly upset Hillary Clinton in Iowa as a populist insurgent.

Mr. Trump’s slashing style may also weigh on primary voters and caucusgoers, Democrats say, guaranteeing that even a kindhearted nominee would face a blizzard of personal attacks and crude trash-talking.

Still, Representative Dave Loebsack, a veteran Democrat whose district covers Iowa’s southeastern quadrant, said he believed that even partisan Iowans yearned for political reconciliation. Though he is neutral in the race, Mr. Loebsack predicted that Mr. Booker’s uplifting narrative would resonate.

Trudging over an icy driveway outside a house party for Mr. Booker in Iowa City on Friday, Mr. Loebsack warned against doing too much to stoke voters’ indignation.

“I think we have to be careful with anger and outrage and alienation because that can also feed into the worst instincts of folks,” Mr. Loebsack said, adding of Mr. Booker: “I love his message of love and redemption and all the rest.”