Home » Politics » Democrats Draw Closer to a Dicey Question: Whether to Impeach Trump

WASHINGTON — House Democrats, facing some of the most striking evidence yet from Robert S. Mueller III that President Trump attempted to thwart his investigation, edged closer on Thursday to confronting a question they have long tried to avoid: whether the president’s behavior warrants impeachment.

Although the more than 400-page report made public on Thursday found “insufficient evidence” to conclude that Mr. Trump conspired in Russia’s interference in the 2016 election and cited legal and factual constraints preventing Mr. Mueller from charging Mr. Trump with obstruction of justice, the special counsel presented months of damning presidential behavior that Democrats said left it up to Congress to review.

“The conclusion that Congress may apply the obstruction laws to the president’s corrupt exercise of the powers of office accords with our constitutional system of checks and balances and the principle that no person is above the law,” Mr. Mueller wrote in the report.

House Democrats, in particular, took that legal analysis as a clear nod that Congress should take the next step to make its own judgment, although Republicans disagreed with that view.

The question is how Democrats will proceed.

Speaker Nancy Pelosi and her lieutenants are keenly aware of the risks of initiating an impeachment inquiry. They are intent on not repeating what they view as the mistakes made by Republicans who undertook a partisan impeachment of President Bill Clinton in the late 1990s and failed to get him removed from office by the Senate. Both parties at the time believed the effort bolstered Mr. Clinton’s national standing and hurt Republicans at the polls.

In this case, even if the House did muster the votes to impeach Mr. Trump, 20 Republicans in the Senate would have to join all Democrats to actually remove Mr. Trump from office. 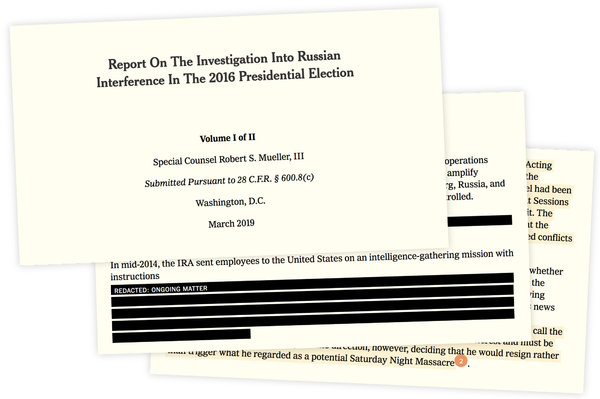 The findings from the special counsel, Robert S. Mueller III, are now available to the public. The redacted report details his two-year investigation into Russian interference in the 2016 presidential election.

Looking at those numbers, the president’s looming re-election campaign and his firm support within his party, Ms. Pelosi has repeatedly tried to throw cold water on the idea of impeachment. Better to beat Mr. Trump on the merits in 2020, she has argued, than risk a failed impeachment that energizes his core supporters.

Representative Adam B. Schiff of California, the chairman of the Intelligence Committee and a close ally of Ms. Pelosi, echoed some of those points on Thursday. “Many of us do think the president is unfit for office, but unless that’s a bipartisan conclusion, an impeachment would be doomed to failure,” he said on CNN. “I continue to think that a failed impeachment is not in the national interest, and so we’ll see what’s been redacted from this report. We’ll continue to do our own work.”

In that case, Democrats would be able to draw questions about the president’s behavior out for months, if not longer, keeping a cloud over Mr. Trump as he runs for re-election. Several House committees have already opened broad investigations into Russian election interference, obstruction of justice and abuse of power. Those inquiries can easily funnel in Mr. Mueller’s findings, and serve as a release valve on calls for Mr. Trump’s removal.

Still, Ms. Pelosi and her allies also run risks in not moving toward impeachment. Voices on the Democrats’ left flank appear to have been emboldened by Mr. Mueller’s report, and will remind party leaders that letting Mr. Trump entirely off the hook for behavior they believe threatens the separation of powers sets a dangerous precedent for the country.

Representative Maxine Waters, Democrat of California and the leader of the Financial Services Committee, broke with party leaders on Thursday, saying Congress would be abdicating its responsibility if it does not attempt to remove Mr. Trump.

“At this point, Congress’s failure to impeach is complacency in the face of the erosion of our democracy and constitutional norms,” Ms. Waters said. “Congress’s failure to impeach would set a dangerous precedent and imperil the nation as it would vest too much power in the executive branch and embolden future officeholders to further debase the U.S. presidency, if that’s even possible.”

Other Democrats did their best to avoid any judgments on impeachment on Thursday and instead focused their attention on the actions of Attorney General William P. Barr and an immediate fight over access to Mr. Mueller’s full findings. At least one chairman, whose committee would lead any impeachment proceedings, pointedly refused to say whether he viewed the actions laid out by Mr. Mueller as worthy of opening such an inquiry, though he did not foreclose the possibility.

“It is too early to talk about that,” Representative Jerrold Nadler, Democrat of New York and the chairman of the House Judiciary Committee, told reporters. “We will have to go follow the evidence where it leads. And I don’t know exactly where it will lead.” 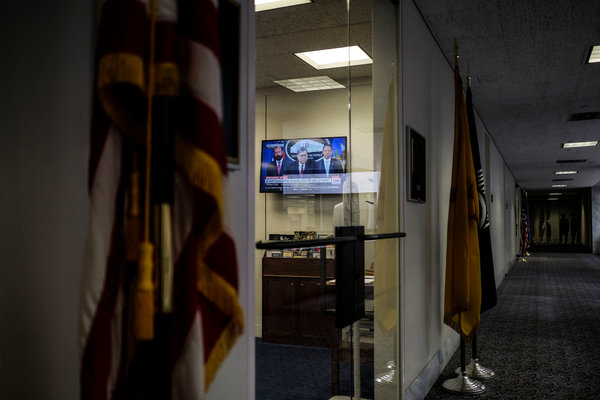 Mr. Nadler said he would issue a subpoena as soon as possible to try to compel Mr. Barr to hand over an unredacted version of the special counsel’s report and underlying evidence, which he asserted was “written with the intent of providing Congress a road map” for further scrutiny. Mr. Nadler and another Democratic chairman also extended formal invitations to Mr. Mueller to testify before Congress in the coming weeks after they grill Mr. Barr himself.

“The special counsel made clear that he did not exonerate the president, and the responsibility now falls to Congress to hold the president accountable for his actions,” he said.

Far from signaling an interest in assisting them, Republicans quickly sought to paint Democrats as in denial about the investigation’s true conclusions. Scattered across the country for Congress’s spring recess, Republican lawmakers sidestepped the specific behavior — including Mr. Trump’s repeated efforts in 2017 to fire Mr. Mueller — documented by the special counsel. They instead embraced statements by Mr. Barr that Mr. Trump’s actions did not amount to obstruction of justice in a legal sense and that his campaign had been cleared of suspicions that they colluded with Russia to subvert the 2016 election.

“It is time to move on,” said Representative Kevin McCarthy of California, the Republican leader in the House. “Americans deserve better than this partisan quest to vilify a political opponent, and I urge our Democratic colleagues in the House to put their emotions and opinions aside, and instead use that passion to come to the table and work on real solutions for all Americans.”

The Republican National Committee circulated talking points to party associates calling the report “a total vindication” of Mr. Trump and his campaign, brushing past page after page of untoward behavior while declaring that “it’s time for the investigators to be investigated.”

The disparate conclusions on Capitol Hill were fueled by the gap between public statements by Mr. Barr that cleared the president and the findings in Mr. Mueller’s report.

Democrats seized on that gap, pummeling Mr. Barr, who they said “deliberately distorted significant portions” of the report, which they believe has warped public understanding of what occurred.

“Special Counsel Mueller’s report paints a disturbing picture of a president who has been weaving a web of deceit, lies and improper behavior and acting as if the law doesn’t apply to him,” said Ms. Pelosi and Senator Chuck Schumer of New York, the Democratic Senate leader. “But if you hadn’t read the report and listened only to Mr. Barr, you wouldn’t have known any of that because Mr. Barr has been so misleading.”

How Congress Passed an Assault Weapons Ban in 1994

Voters head to the polls in critical U.S. midterm test for Donald Trump