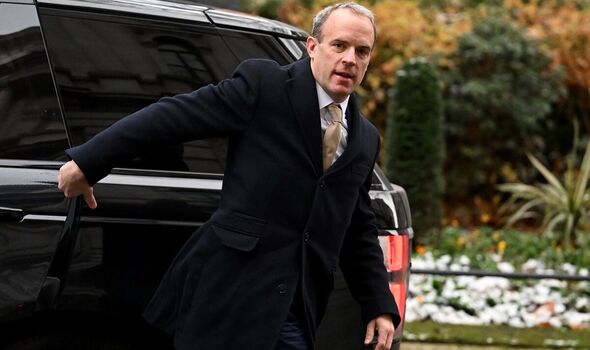 Mr Raab spoke out in the wake of the Rape Review, which says that while progress is being made, improvements are still needed. Figures for the second quarter of this year reveal the number of cases police referred to the Crown Prosecution Service was up 95 percent to 901, from the 2019 quarterly average.

Convictions for adult rape for the full year to June 2022 were up 41 percent to 532 from 377 in 2019. This comes in the wake of the first national 24/7 rape support line for victims. Closer working between police and prosecutors, along with less intrusive investigations, are aimed at helping victims through the court process.

Mr Raab said: “Rape convictions are up two-thirds since last year and CPS charges are also up by nearly two-thirds from 2019.

“But I want to make sure victims are properly supported throughout the criminal justice process.

“That is why we introduced a 24/7 rape and sexual abuse helpline, pre-recording of evidence in court to spare them the trauma of testifying during a live trial, and a new approach to police investigations that focuses on the behaviour of the suspect rather than the victim.”

That emphasis on suspects rather than victims in not yet nationwide – covering 19 police forces and nine CPS areas.

Meanwhile, a new law stops intrusive requests for victims’ phones.And funding for victim support services has been quadrupled to £192million a year by 2025. Emily Hunt, independent adviser to the Government, said: “This is only the start of the step-change we need to make to truly tackle sexual violence.”

U.S. housing chief says he will likely step down in 2020: Newsmax