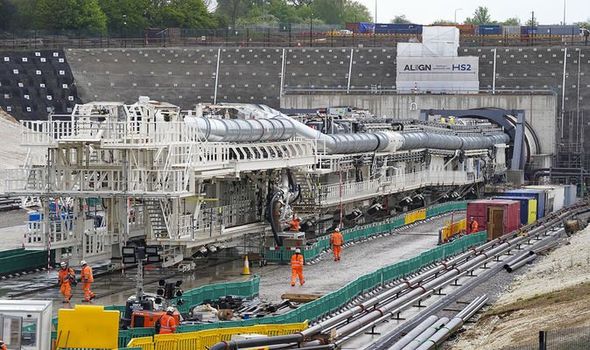 High speed rail technology is now sixty years old, at the limits of its aerodynamic design and materials strength. Victorian Britain, full of self belief and engineering confidence, built the British Rail network, establishing us as the most advanced Country in the world. This pioneering spirit evaporated in post war socialist Britain and having developed the tilting advanced passenger train in the 1980’s we abandoned it. The Italians purchased the technology, perfected it and sold it back to us in the form of Virgin Pendolinos which run on the West Coast mainline.

We have stretched the technology as far as it can go. It has had its uses, in particular connecting Britain to the continent through Eurostar. A company I’m involved with, J Brand Ltd, has worked on that line over the years in an electrical support role so I’m aware of the effort that has gone into maintaining it. Through my own numerous wasteful trips to Brussels as an MEP I was grateful for the time it saved me.

But it’s naive to think that success can be replicated elsewhere, especially 30 years later. Technology has moved on, and so should we.

HS2 is arguably the most expensive single project ever attempted by the British Government in peacetime.

The returns for this unprecedented level of expenditure are meagre, providing few jobs and marginally shorter journey times at the expense of up to £100 billion (current estimate) and irreversible environmental damage.  Given that countries are judged on their engineering skills, would it not be better to embrace tomorrow’s technology utilising the skills of the Northern workforce to pump prime a new industry in which we lead the world?  Hyperloop is based on established technology.

Maglev propulsion, linear induction motors, vacuum and autonomous vehicle control systems.  With predicted speeds of up to 760 mph  Hyperloop could complete the 163 mile journey from Manchester to London in just 23 minutes.  It would be faster than the existing trains, safer than travelling by car and cause less damage to the environment than aeroplanes.  Why would we want to embrace an expensive, declining technology just as it is becoming obsolete?  Perhaps our destiny is to symbolise our political decline with such a recidivist waste of taxpayers’ money.

Hyperloop is a new experimental train design employing the use of established UK developed Maglev technology.  Magnetic levitation occurs when an object is suspended in air using only magnetic fields. This lifts the train car above the track while the propulsion comes from the force of like magnets repelling and opposite magnets pulling. There are Maglev trains operating in China and Japan reaching speeds of 375 mph, cutting journey times and creating less emissions than either a conventional high speed train or short haul flight, directly as a result of reduced friction.

Indeed Britain once had a lead in Maglev technology and it was used at Birmingham airport between 1984-95 for their popular and cheap to run shuttle. Hyperloop is a further technological advance using an amalgamation of proven technologies and combining Maglev technology with vacuum pumps thereby cutting air resistance and friction.  It operates in a tube either above or below ground, is noiseless and has no exposed high voltage lines.  It also uses less land than will be required for HS2.

Elon Musk has identified Hyperloop as a viable means of more efficient transport for both goods and people.  Virgin Hyperloop has already proved the concept in Nevada in November 2020 with Missouri in the running to have the world’s first hyperloop connecting the State’s two largest metropolitan areas, Kansas City and Missouri.  The journey time for the 248 mile journey could be reduced from over five hours to around 30 minutes!

HS2 is a huge error of judgment and many vested interests will profit greatly from this folly.  It will be difficult to adapt the current and outdated plans but if we taxpayers are to be fleeced to pay for this white elephant, surely we should consider using it to develop a cutting edge transport innovation using the UK’s considerable legacy engineering skills, many of which exist in the North? Various different corners of British innovation will benefit. To name just one, there are new tunnelling technologies waiting to be embraced. Faster, safer and more economical methods which twinned with Hyperloop would revolutionise how we develop our infrastructure.

Boris wants to push his ‘levelling up’ agenda – Hyperloop is the perfect opportunity. It’s better value for money, environmentally friendly and most importantly it’s achievable. Now is the time to ditch HS2 and embrace Hyperloop to finally drag Britain’s transport network into the 21st Century.

Bernie Sanders: Lion of the Left, but Not the Only One Roaring