Meeting came hours after Turkish president announced that Ankara shared tapes related to Khahsoggi’s murder with the US. 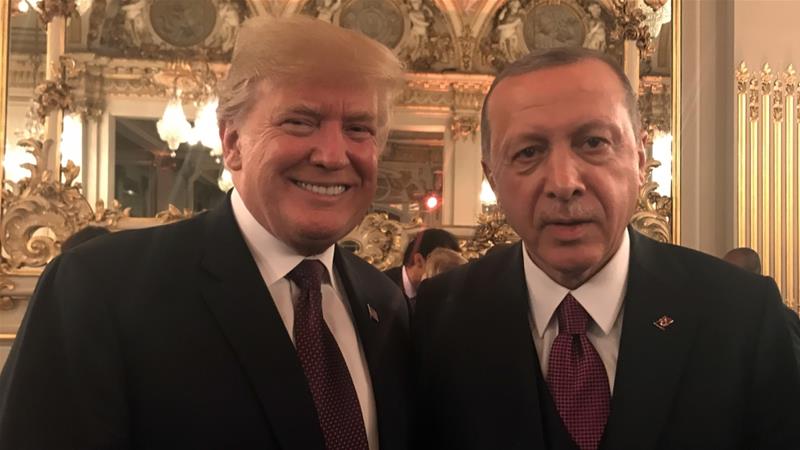 US President Donald Trump and his Turkish counterpart Recep Tayyip Erdogan met during a dinner in Paris, as international pressure grows on Washington to put pressure on Saudi Arabia over the murder of journalist Jamal Khashoggi.

Erdogan arrived in Paris on Saturday at the invitation of French President Emmanuel Macron to attend the Armistice Day commemorations, along with other world leaders.

The dinner, where Trump and Erdogan met each other, was hosted by Macron in the honour of world leaders and their spouses who came to Paris to attend the event.

On Saturday, before getting on the plane for Paris, Erdogan said Turkey shared recordings related to the killing of the Saudi journalist with the US, Germany, France and Britain, upping the pressure on Turkey’s allies to respond to the crisis.

Turkish sources have said previously that authorities have an audio recording purportedly documenting the murder of the Saudi journalist.

The existence of such a recording had never been officially confirmed.

Erdogan said Saudi Arabia knows Khashoggi’s killer is among a group of 15 people who flew into Istanbul hours before the October 2 killing in the Saudi consulate in Istanbul.

“We gave the tapes. We gave them to Saudi Arabia, to the United States, Germans, French and British, all of them. They have listened to all the conversations in them,” Erdogan said.

Trump said on Wednesday he will have a “stronger opinion” on the killing of Khashoggi “next week”.

“I will have a much stronger opinion on that over the next week. We are working with Congress, working with Turkey and working with Saudi Arabia and I’m forming a very strong opinion.”

Sources told Al Jazeera on Saturday that Turkish police ended the search for Khashoggi’s body, but that the criminal investigation into the 59-year-old’s murder would continue.

Al Jazeera learned on Friday that traces of acid were found at the Saudi consul-general’s residence in Istanbul, where the body was believed to be disposed of with the use of chemicals.

The residence is at walking distance from the Saudi consulate, where Khashoggi – a Washington Post columnist critical of the Saudi government and the all-powerful Crown Prince Mohammed bin Salman – was killed by a team of Saudi officers and officials.

Saudi Arabia has changed its narrative about the murder several times amid international outcry and intensifying scepticism over its account.

After insisting for more than two weeks that Khashoggi had left the consulate, it then admitted the journalist had died in a fistfight inside the building. Later, Riyadh conceded Khashoggi was killed in a premeditated murder, but that the murder was an unplanned “rogue operation”.

However, Erdogan has accused the “highest levels” of the Saudi government of ordering the hit, while some officials have pointed the finger at the crown prince – a charge Riyadh denies.

Istanbul’s chief prosecutor said on October 31 that Khashoggi was strangled as soon as he entered the consulate and that his body was dismembered, in the first official comments on the case.

Sadiq Khan: It’s time for truth and a second vote on Brexit disaster