Michel Barnier, the EU’s chief haggler, told his UK counterpart Lord Frost the EU was not serious about preventing food shipments being sent to the province. It comes after a “useful” week of informal talks between the two sides in Brussels as the post-Brexit negotiations reach a critical point. Earlier in the week Prime Minister Boris Johnson accused the EU of being “abusive” negotiators in the wrangling over a free-trade agreement.

But Brussels diplomats have rowed back from the threat after it threatened to blow up the future relationship talks.

A UK source close to the negotiations said: “Barnier has said there is no obstacle to listing and normal process will be followed.”

Previously the EU had suggested the UK could be prevented from exporting to the bloc unless the Government published its exact post-Brexit plans for food safety. 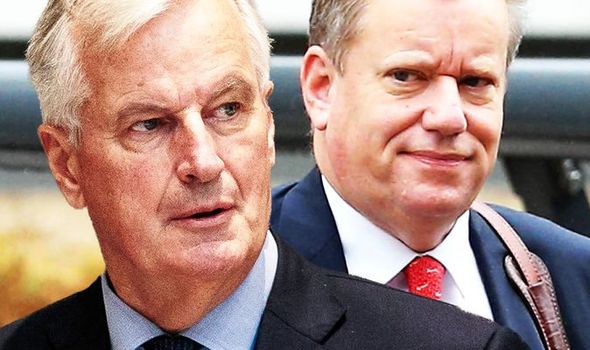 Lord Frost, the Prime Minister’s lead Brexit envoy, was in Brussels this week for crunch talks with his counterpart.

They dismissed fears the future relationship talks would collapse after a row over legislation published by Downing Street that allows ministers to overwrite the Withdrawal Agreement.

A Government spokesman said: “The UK’s negotiating team had useful informal discussions with the EU this week as we seek to reach an agreement by mid-October on our future relationship.

“These covered a broad range of issues and some limited progress was made, but significant gaps remain in key areas, including fisheries and subsidies. We will continue to work hard to bridge those gaps in talks next week, without compromising our fundamental position of being an independent country.”

Biden: Racism in US is institutional, ‘white man’s problem’