Home » Politics » EU fires back: Furious Brussels gives Boris ONE MONTH to back down on new Brexit plan

European Commission vice-president Maros Sefocvic claimed he had “serious concerns” with the Government’s Internal Market Bill, insisting the legislation does nothing to protect the Good Friday Agreement. The warning came during a meeting of the Brexit Joint Committee with Cabinet Office minister Michael Gove. The furious Brussels bureaucrat warned “the UK government to withdraw these measures from the draft Bill in the shortest time possible and in any case by the end of the month”, the Commission said in a statement.

It added: “He stated that by putting forward this Bill, the UK has seriously damaged trust between the EU and the UK.

“It is now up to the UK government to re-establish that trust.

“He reminded the UK government that the Withdrawal Agreement contains a number of mechanisms and legal remedies to address violations of the legal obligations contained in the text – which the European Union will not be shy in using.

“If the Bill were to be adopted, it would constitute an extremely serious violation of the Withdrawal Agreement and of international law. 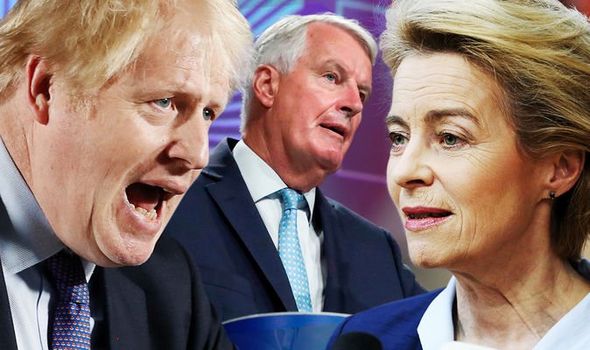 “The EU does not accept the argument that the aim of the draft Bill is to protect the Good Friday Agreement. In fact, it is of the view that it does the opposite.

“The European Union expects the letter and spirit of this Agreement to be fully respected. Violating the terms of the Withdrawal Agreement would break international law, undermine trust and put at risk the ongoing future relationship negotiations.”