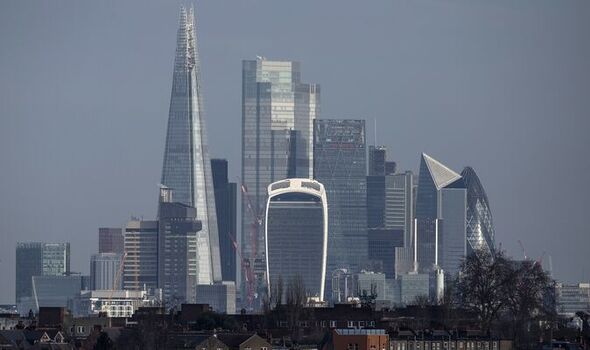 Economists said the threat of recession is “hanging in the balance” but could be “narrowly avoided”. Official figures showed gross domestic product (GDP) rose by 0.2 percent between June and July following a drop of 0.6 percent the previous month, when output was hit by the Queen’s Platinum Jubilee bank holiday.

Services were the main driver of growth with car sales and repairs the biggest contributor followed by sports activities and recreation.

The Office for National Statistics said that included the UK hosting the Women’s Euro Championship and the start of the Commonwealth Games.

But record hot temperatures in July meant there were some lost working days, in particular in the construction sector as it was too hot for workers to go on sites, while there was also lower usage of electricity, which knocked the production industry.

Growth was lower than the 0.3 percent expected by most economists and still leaves the economy at risk of dropping into a recession.

Samuel Tombs, chief UK economist at Pantheon Macroeconomics, said the threat of a technical recession – as defined by two quarters in a row of falling output – is now “hanging in the balance” after the economy contracted by 0.1 percent between April and June.

But he said the economy has not yet gone into reverse and “we continue to think that a recession will be narrowly avoided over the coming quarters”.

Experts believe the extra public holiday for the Queen’s funeral on September 19 could affect growth again this month, with Pantheon pencilling in a 0.2 percent hit to GDP from the lost working day.

“It’s touch and go if GDP will see a second successive quarterly contraction in quarter three.

“Last week’s announcement of an energy price guarantee should greatly reduce the risk of the economy experiencing a deep recession, but the next year or so will still be very challenging for the economy.”

Paul Dales, chief UK economist at Capital Economics, said: “The disappointingly small rebound in real GDP in July suggests that the economy has little momentum and is probably already in recession.

“The government’s utility price freeze is unlikely to change that.”

David Bharier, head of research at the British Chambers of Commerce, said the figures showed growth “continues to fluctuate considerably” on a month-by-month basis.

“The UK economy faces serious immediate and longer-term structural issues which could lead to quarterly recession by the end of 2022, and anaemic yearly growth after that,” he added.

“BCC’s research shows that business confidence is trending downwards, with inflation wiping out turnover and profitability for many firms and a record proportion facing recruitment difficulties.

“Last week’s announcement on support for firms’ energy bills will have provided some reassurance to business and should dampen one of the key sources of inflation, but further details of the scheme are needed to restore long-term confidence.”

The UK’s trade gap narrowed to a better-than-expected £7.8 billion in July, according to the ONS.

But it is expected to surge to “enormous proportions” later this year as fuel prices soar higher as a result of Russia’s war in Ukraine.

Britain’s total trade deficit in July eased back from £11.4 billion in June.

Ms Dickens is forecasting the trade deficit to grow to a record 7.5 percent of gross domestic product in the final three months of 2022, up from 4.7 percent in the second quarter.