In a sign of his concerns, the nation’s highest-ranking military officer also gathered commanders to remind them of the safeguards in the nuclear launch procedures. 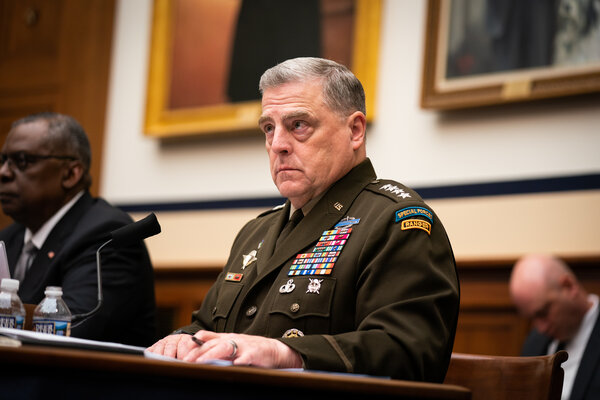 WASHINGTON — The chairman of the Joint Chiefs of Staff twice called his Chinese counterpart in the final months of the Trump administration to reassure him that Donald J. Trump had no plans to attack China in an effort to remain in power and that the United States was not collapsing, according to “Peril,” a new book by the Washington Post reporters Bob Woodward and Robert Costa.

“Things may look unsteady,” the chairman, Gen. Mark A. Milley, told Gen. Li Zuocheng of China on Jan. 8, two days after Mr. Trump’s supporters stormed the Capitol to try to stop the certification of his election loss and in the second of two such calls. “But that’s the nature of democracy, General Li. We are 100 percent steady. Everything’s fine. But democracy can be sloppy sometimes.”

Yet despite his assurances, General Milley was so concerned about Mr. Trump that later that day he convened a meeting with top commanders to remind them that the procedures for launching a nuclear weapon called for his involvement in such a decision.

The book also reveals how Vice President Mike Pence struggled more than was publicly known over how to navigate Mr. Trump’s demands that he upend the election certification. Speaking privately to former Vice President Dan Quayle, who oversaw the certification of the 1992 election in which he was on the losing ticket, Mr. Pence appeared open to going along with Mr. Trump’s plan, pushed the false claim that Arizona’s voting results were wrong and asked whether there was any way he could delay certification.

“Peril,” which is scheduled to be released next Tuesday, says its accounts are based on contemporaneous notes, documents and interviews with unnamed firsthand participants and witnesses. The New York Times obtained a copy of it.

Similar to other media reports and books released since Mr. Trump left office, the book details how Mr. Trump’s presidency essentially collapsed in his final months in office, particularly after his election loss and the start of his campaign to deny the results. Top aides — including General Milley, Defense Secretary Mark Esper and Attorney General William P. Barr — became convinced that they needed to take drastic measures to stop him from trampling on American democracy or setting off an international conflict, and General Milley thought that Mr. Trump had declined mentally in the aftermath of the election, according to the book.

A little less than half of the book also covers the first several months of Joseph R. Biden’s administration, as the new president grappled with the pandemic, a faltering economy, Congress and the military’s withdrawal from Afghanistan.

“If the mission is to preserve the Ghani government, I would not send my own son,” Mr. Biden is quoted as telling aides in his first few months in office during the discussions about the withdrawal, referring to President Ashraf Ghani, who at the time was trying to repel the Taliban from taking over the country.

But it is the book’s details about the Trump administration that are likely to garner the most attention.

In the days leading up to the 2020 election, the book reveals, American intelligence showed that the Chinese believed that Mr. Trump planned to launch a military strike to create an international crisis that he could claim to solve as a last-ditch effort to beat Joseph R. Biden Jr.

Buttigieg opens fundraisers to media after tension over donor influence