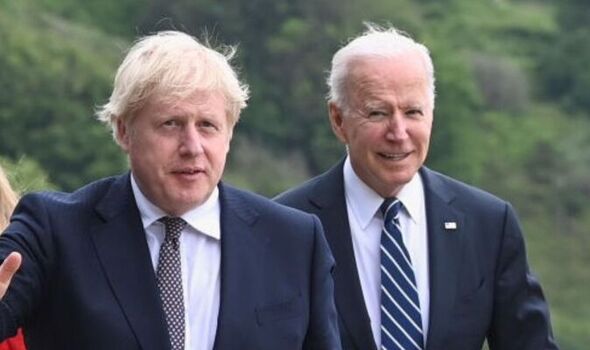 The PM held a crisis conference call with US President Joe Biden amid fears Russia for diplomacy was still open” to avert Vladimir Putin’s feared invasion of Ukraine.

The leaders sent a stark message to Putin threatening widespread “damage” to Russia with a “significant package of sanctions” if he ordered his 130,000-strong army into Ukraine.

It comes as Ukrainian officials said they expect Russia to launch an invasion tomorrow.

Mr Johnson admitted that the world is “on the edge of a precipice” with intelligence agencies reporting that a massive armoured offensive targeting Kiev could be hours away.

The PM said: “We need to get ready to impose some very, very severe economic consequences on Russia.”

Mr Johnson will today chair a meeting of the Whitehall emergency planning committee to discuss the imminent Ukraine invasion threat with ministers and security chiefs. Last night, he cut short a tour of the UK planned for this week to dash back to Downing Street to focus on the crisis.

Speaking in Scotland yesterday before abandoning his tour, the PM said: “I think the evidence is pretty clear. You’ve got about 130,000 troops massing on the Ukrainian border. There’s all sorts of other signs that show there are serious preparations for an invasion.

“And we’ve got to respect that, we’ve got to realise that this is a very dangerous, difficult situation. We are on the edge of a precipice, but there is still time for President Putin to step back.

“And what we’re urging is for everybody to engage in dialogue, for a conversation to take place, and for the Russians to avoid what I think everybody, certainly everybody in the UK, can see would be a disastrous mistake, disastrous for Russia.

“The signs are, as you’ve heard from President Biden, that they’re at least planning for something that could take place as early as in the next 48 hours.

“That is extremely concerning. What we need to do is make sure that President Putin understands the economic consequences, the political consequences of doing this. I think what needs to happen is that the world needs to learn the lesson of 2014. If you remember, Russia took eastern Ukraine, they took Crimea. But we didn’t really do enough to divest, to move away from dependence on Russian hydrocarbons.

“And what I think all European countries need to do now is yank out that hypodermic drip feed of Russian hydrocarbons that is keeping so many economies going.

“We need to find alternative sources of energy and we need to get ready to impose severe economic consequences on Russia.”

On Twitter last night, the PM said: “President Biden and I agreed this evening there is a crucial window for diplomacy and for Russia to step back from its threats towards Ukraine.

“We are united in the face of such threats. Further incursion into Ukraine will result in far-reaching damage for Russia and the world.”

Mr Johnson appealed to Nato allies to stand united in the face of Russian aggression.

He added: “I think it’s very important that we all stand together, and that we show a united front, particularly when it comes to economic sanctions.

“And the UK, as you know, has been in the lead in bringing our allies together so that there’s a tough package of sanctions.

And he insisted the Ukrainian government should not give in to the Kremlin demand for it to rule out ever joining Nato. Mr Johnson added: “I think that it’s very important that we have a dialogue, that we have a conversation. But what we can’t do is trade away the sovereign rights of the Ukrainian people to aspire to Nato membership.”

Ukrainian President Volodymyr Zelensky said last night he expects Russia to launch their invasion of his country tomorrow as he urged his nation not to panic.

Mr Zelensky said: “We are told that February 16 will be the day of attack. We will make it a day of unity.

“We have one great European aspiration. We want freedom. We all want to live happily, and happiness loves the strong. We have never been able to give up and we are not going to learn that.

“Our military should feel our support, our togetherness and our unity.”

Officials have warned that missiles and bombs could strike Ukrainian cities within minutes should President Putin order an invasion.

There are also warships in the Black Sea capable of launching an amphibious landing on Ukraine’s coast and firing precision missiles against targets across the country.

I suspect no one knows what’s going to happen next except Vladimir Putin.

He has got his forces massed around Ukraine and has the power to invade.

But the decision has not been made and will depend on if Mr Putin reckons it is an advantage to do it. Right now he probably doesn’t know.

In other words, his trump card is the uncertainty which has been created. He is playing poker.

All we in the West and in Nato can do is make plain the grave disadvantages.

UK ministers have said we won’t be fighting in Ukraine. Nevertheless, the impact of sanctions for example is not small because nearly half the Russian economy is dependent on oil and gas.

The second thing is, I don’t think Ukraine will be a pushover. They’ve got good armed forces and will fight.

The third thing is, does Mr Putin really want to be at war with fellow Slavs? Russians might not like that at all.

And diplomatically he’ll be put into the cold. Those are the sorts of things that will be arguing against him invading.

On the other hand, he desperately wants Ukraine not to be a member of Nato.

But if the country wants to join and we agree, and if they satisfy our criteria, then so be it. And Nato is not an offensive alliance.

Wars are primarily caused by miscalculation and my hope and belief is that the Russians will see an invasion as not being worth doing.

Additionally, Putin also wants to bring the Baltic states into his sphere – but Ukraine is his focus now.

Time to go, Leo! Varadkar told to quit as criminal probe launched into leaking of document

‘I can’t believe it!’ Furious Angela Rayner LOSES IT with Boris Johnson in angry rant