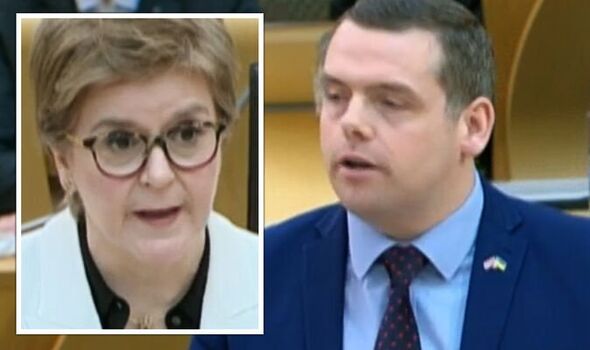 The First Minister will face Scottish Tory leader Douglas Ross and Scottish Labour leader Anas Sarwar in Holyrood at 12pm today. The showdown comes after Ms Sturgeon admitted she would likely “make way” if a second Scottish independence referendum failed. But during her appearance on ITV’s Loose Women, Ms Sturgeon insisted she believed “when Scotland next votes on independence, it will vote yes”. The comments come amid a renewed push for another referendum despite Boris Johnson ruling one out while the nation focuses its support for Ukraine.

Sturgeon pushes ahead for second referendum despite Johnson ruling it out

Nicola Sturgeon is doubling down on her ambition to hold a second Scottish Independence referendum despite the Prime Minister repeatedly ruling it out.

Last month, Boris Johnson ruled out another referendum on Scottish independence being held while Europe is dealing with Vladimir Putin’s invasion of Ukraine.

Speaking at the Scottish Conservative conference in Aberdeen in March, the Prime Minister said: “This is not the time for yet more delectable disputations about the constitution when our European continent is being ravished by the most vicious war since 1945 and when public service and the economy need to recover from the pandemic.

“When we face so many challenges but when we also have so much going for us and so much to look forward to, let’s put that endless confected division behind us and let’s take this country forward in a way that makes us all proud – delivering prosperity and opportunity at home and giving leadership that makes us a force for good around the world.”

He added that “now is the time to go beyond the parochialism and constitutional myopia of the SNP” and called for a focus on “projects that will bring jobs and growth to the whole UK”.

Good morning from London. I’m Tara Fair, I’ll be bringing you all the latest developments on First Minister’s Questions (FMQs). Please feel free to get in touch with me as I work if you have a story or tips to share! Your thoughts are always welcome.