Nicola Sturgeon has put the Scottish National Party in the centre of this general election.

But in reality, Ms Sturgeon doesn’t have the power to make either of these things happen without doing a deal with a bigger party.

As she launched the SNP’s election campaign in Edinburgh, she made it clear she will not, under any circumstances, prop up Boris Johnson in No 10. Instead she’s hoping there’s a post-election deal to be done with a minority Labour government in which she can secure a referendum on independence.

She told me: “I will be making the case a hung parliament gives Scotland maximum influence and if there is a big group of SNP MPs able to wield that influence on Scotland’s behalf but also on behalf of a progressive values that many people across the UK cherish.

“That would be a better outcome than certainly a Boris Johnson government or even a Jeremy Corbyn government without that positive influence of the SNP.”

Ms Sturgeon knows that if this election doesn’t go Mr Johnson’s way she will be a kingmaker in Westminster.

Her party has eviscerated Labour in Scotland. In 2010 Labour won 41 seats in Scotland, but in 2015 it was demolished, returning just one Scottish MP to Westminster.

Now, with just six seats in Scotland and little hope of putting on any more in 2019, Mr Corbyn is very unlikely to get anywhere near a working majority without the backing of the SNP. 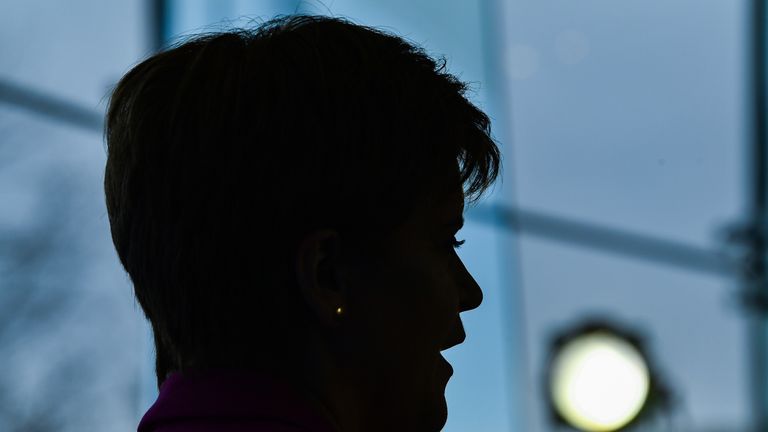 Labour know it too, although John McDonnell and Keir Starmer have been emphatic about not doing any deals with any other parties.

Mr Starmer, the shadow chancellor, told me last week that Labour was going for a majority but would run a minority government if necessary in which it would see if others would back Labour policy on a case-by-case basis.

“We’d implement the policies and we’d expect other parties to support them and if they didn’t, well we’d go back to the people,” he told me last week at Labour’s campaign launch in Battersea.

Ms Sturgeon told me she hadn’t had any exploratory talks with Mr Corbyn, saying Mr Johnson’s accusation that the SNP and Labour leaders had done a “shady deal” was “nonsense”.

But she was clear too that the price of SNP support in a hung parliament is a second independence referendum in Scotland.

“They will get no support from the SNP if they don’t accept the principle that Scotland has its right to choose its own future,” Ms Sturgeon told me. Her red line in any confidence and supply arrangement “is that they respect that principle. It is for Scotland to decide if there is another independent referendum, what the time scale of that should be and if it’s for Scotland to choose our own future”.

Ms Sturgeon also thinks for all the posturing there is a deal to be done should the Tories fail to win a majority on 13 December. Labour cannot govern otherwise.

“I think it is clear from Jeremy Corbyn’s comments that he opposes independence. He doesn’t want there to be a second independence referendum but I think he accepts that it is for the people of Scotland to decide and I think it is pretty clear from the comments he’s made.”

Ms Sturgeon can’t unilaterally secure a referendum, but she has calculated that this election will give her momentum, one way or the other, to secure another poll.

:: Listen to the All Out Politics podcast on Apple Podcasts, Google Podcasts, Spotify, Spreaker

A Labour government might have to promise her one – perhaps delayed to the latter half of the next five-year parliament – in return for SNP support.

And Mr Johnson might create the conditions in Scotland that one cannot just repeatedly be refused.

Because his policy not only to take an unwilling Scotland out of the EU, but then force it into a post-Brexit trade deal that loosens ties with the EU in order to build them with Trump’s America, will only further the independence cause.

Ms Sturgeon says she wants a progressive alliance where the SNP hold the balance of power, to both stop Brexit and then call a second referendum on Scottish independence.

But the SNP calling the shots in Westminster might make the case for independence less pressing for some Scots, whereas a Boris Johnson Brexit creates the ideal conditions for Scottish independence.

But he might end up giving Ms Sturgeon exactly what she wants.

Fifty-nine seats in Scotland up for grabs, the SNP expect to win big.

It may be a party representing just one of the union’s four nations, but it could end up reshaping the entire UK.

The Brexit Election: For the fastest results service and in-depth analysis watch Sky News live from 9pm on Thursday 12 December, with a KayBurley@breakfast election special on Friday 13 December

Voice of the Mirror: Generation of women robbed of state pension deserve dignity