It was an early start for day two of the Conservative campaign with journalists and Boris Johnson’s political team gathering in an airport lounge near London to hop on a plane to Stockton-on-Tees.

Arriving a little later than planned, the prime minister swept through in a motorcade of Range Rovers, coatless despite the freezing temperatures but ready for a long day on the trail.

It’s always a bit strange heading out on the road with a politician.

Journalists tend to be kept a few rows of seats back from the party leader and at arms length on visits, but spirits rose on this trip when Boris Johnson walked down the aisle and plonked himself down behind the press pack.

He was hastily steered back to the very front however – mumbling about Con Air, that dubious Nicolas Cage film, as he went.

A short 45-minute flight later and the pack jumped on a bus to the Tetley Tea factory for a tour.

Mr Johnson stopped for a cuppa with staff while journalists pulled on hair nets, hard hats and overcoats to follow on behind. 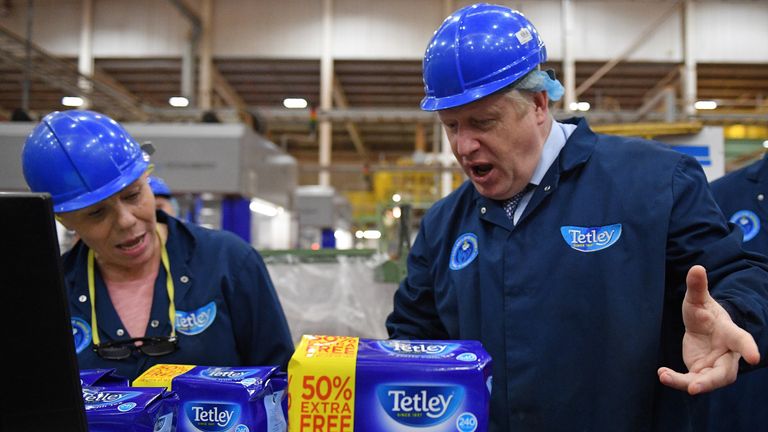 It’s hard to get a sense of what goes on during trips like this because the press are often separated from the politicians so they can speak to staff without being filmed or overheard.

Mr Johnson stayed at the factory for about half an hour, telling staff he wasn’t a fan of green tea but enjoys his cuppa rusty coloured, without much milk.

He was asked about Brexit and vowed to get it done quickly – his main message during this campaign and the way the Conservatives want to frame the election; as a choice between delay with Labour or an “oven-ready” Brexit deal.

We knew the day was off to a winning start when we were all handed a Tetley Tea goodie bag as we left the factory.

It made up for having to broadcast live wearing a hairnet – prompting comparisons to a school dinnerlady.

Back on the bus and back to the airport for another flight, this time to Scotland.

Landing at RAF Lossiemouth around an hour later we headed out to a whisky distillery.

On the plane before landing the prime minister was grilled by aides to check he knew his facts about alcohol duties and import rates.

He reeled off a list of facts while clutching his copy of Beowulf – light plane reading.

Alcohol duties are an important issue in Scotland, which produces a lot of whisky, and Mr Johnson was asked about the issue during his visit.

He sampled some alcohol and vowed to review duties, an important pledge for Scottish Conservative MPs keen to prove they have won key concessions for the industry in order to hold onto their seats.

The Conservatives were boosted by relatively big gains in Scotland in 2017 – going from one seat to 13.

The party must hold these seats if it wants to get the majority it needs to deliver on promises Mr Johnson is making during this campaign.

During the visit he also spoke about Scottish independence, promising to stop a second referendum on the issue.

He warned Labour has done a deal with the Scottish National Party (SNP) – a claim which has no foundation in fact and has been strongly denied by Labour.

Comments made by Conservative candidate Nick Conrad about rape victims overshadowed the later part of the day, and Mr Johnson condemned them but stopped short of saying that party would choose someone else to fight the seat.

It comes after a tricky start to the election after Alun Cairns, a sitting cabinet minister, resigned on the first day of the campaign prompting damaging headlines. 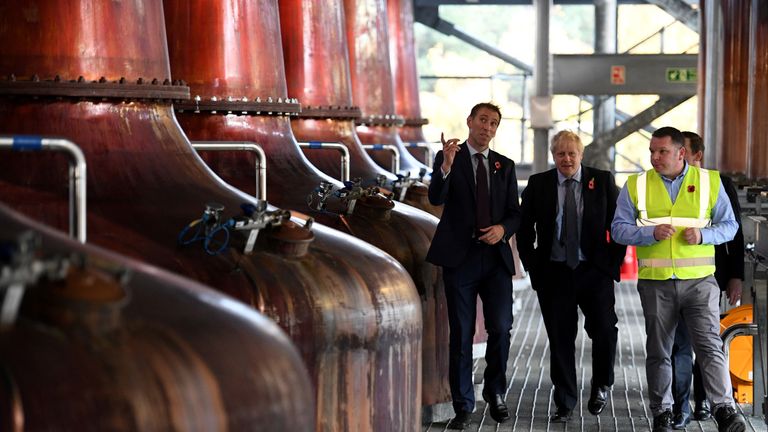 We headed off on the final leg of the tour around an hour later than planned, catching a flight to Belfast for a visit to a crisp factory in County Armargh.

Arriving in darkness after a 45-minute bus ride the visit was shorter than planned and had a strange feel to it. Staff were excited to see Mr Johnson but there was very little time to speak to employees.

The party’s message here is that the whole of the UK will leave the EU as one – a pledge the Democratic Unionist Party (DUP) does not agree with. 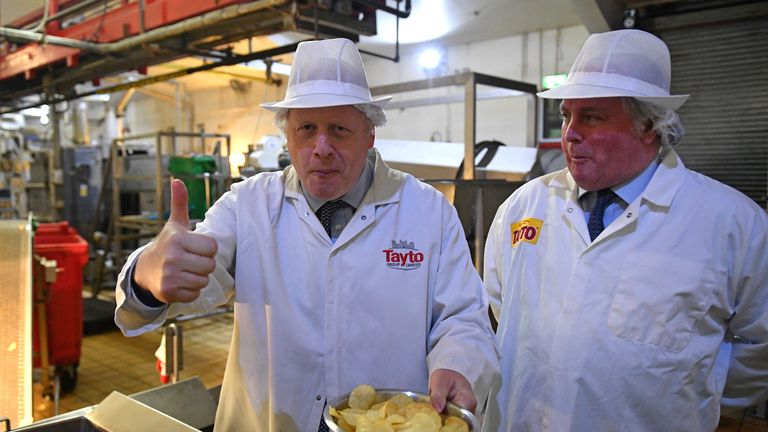 Racing back to Belfast airport with boxes of crisps held tightly we very nearly missed the flight back to the East Midlands – causing panic that everyone would be in the wrong place ahead of another long day on the campaign trail on Friday.

It was a long and packed day but with very little chance to speak to voters or mingle with crowds – something his supporters say the PM does well.

Mr Johnson is understood to want to fight a rally-style campaign with him front and centre making stump speeches to win over those who might be wavering.

But there was an air to this tour of having to get trips to Scotland and Northern Ireland done early in order to focus on seats in the Midlands and north where the Tories really need to take votes off Labour.

The Brexit Election: For the fastest results service and in-depth analysis watch Sky News live from 10pm on Thursday 12 December, with a [email protected] election special on Friday 13 December.