HOUSTON (Reuters) – George Floyd, the African-American man whose death in police custody roused worldwide protests against racism, was extolled on Tuesday as a “gentle giant” and a symbol of the oppressed’s struggle for justice at a funeral in his hometown of Houston.

Family members and friends, most dressed all in white, stepped up to a microphone to describe Floyd as a loving, larger than life personality who deserved justice after his death while in the custody of Minneapolis police officers on May 25.

A 46-year-old African American who grew up in Houston, Floyd died after a white police officer pinned him with a knee to the neck for 8 minutes 46 seconds. The policeman, Derek Chauvin, 44, has been charged with second-degree murder and three others with aiding and abetting.

Floyd’s death was captured in excruciating detail on a bystander’s video, with his words “I can’t breathe” shocking the world and triggering a wave of demonstrations against racism and police brutality against minorities.

Floyd’s niece Brooke Williams said in a eulogy that drew applause inside the Fountain of Praise Church, “I can breathe. And as long as I’m breathing, justice will be served.”

Advised to guard against the coronavirus pandemic by wearing masks over their mouths and noses, some mourners and onlookers wore ones that also said, “I can’t breathe.”

“This was not just a tragedy – it was a crime,” the Reverend Al Sharpton, a prominent civil rights leader, said in the main eulogy, referring to Floyd’s death.

“Until these people pay for what they did we will be there with them because lives like George Floyd will not matter until somebody pays the cost for taking their lives.”

About 500 people were invited to the funeral, which followed memorial services last week in Minneapolis and Raeford, the North Carolina town where Floyd was born.

“This is a home-going celebration,” Reverend Mia Wright, co-pastor at the church, told mourners. Banners featured pop art illustrations of Floyd wearing a baseball cap with a halo above it.

The ceremony was much more than a simple funeral for a deceased loved one. The church was filled with the sounds of soulful gospel song, and video was played of shared memories about the life of the 6 foot 6 inch man known as “Big Floyd.”

Underscoring the impact his death had on the world, the funeral was broadcast live on every major U.S. broadcast and cable news channel and the New York Stock Exchange observed 8 minutes 46 seconds of silence that was broadcast in silence on business news channel CNBC.

“I would like to thank the whole world for what it has done for my family today, especially George,” Floyd’s aunt, Kathleen McGee said at the funeral. “I have gained such a huge family all over the world.” 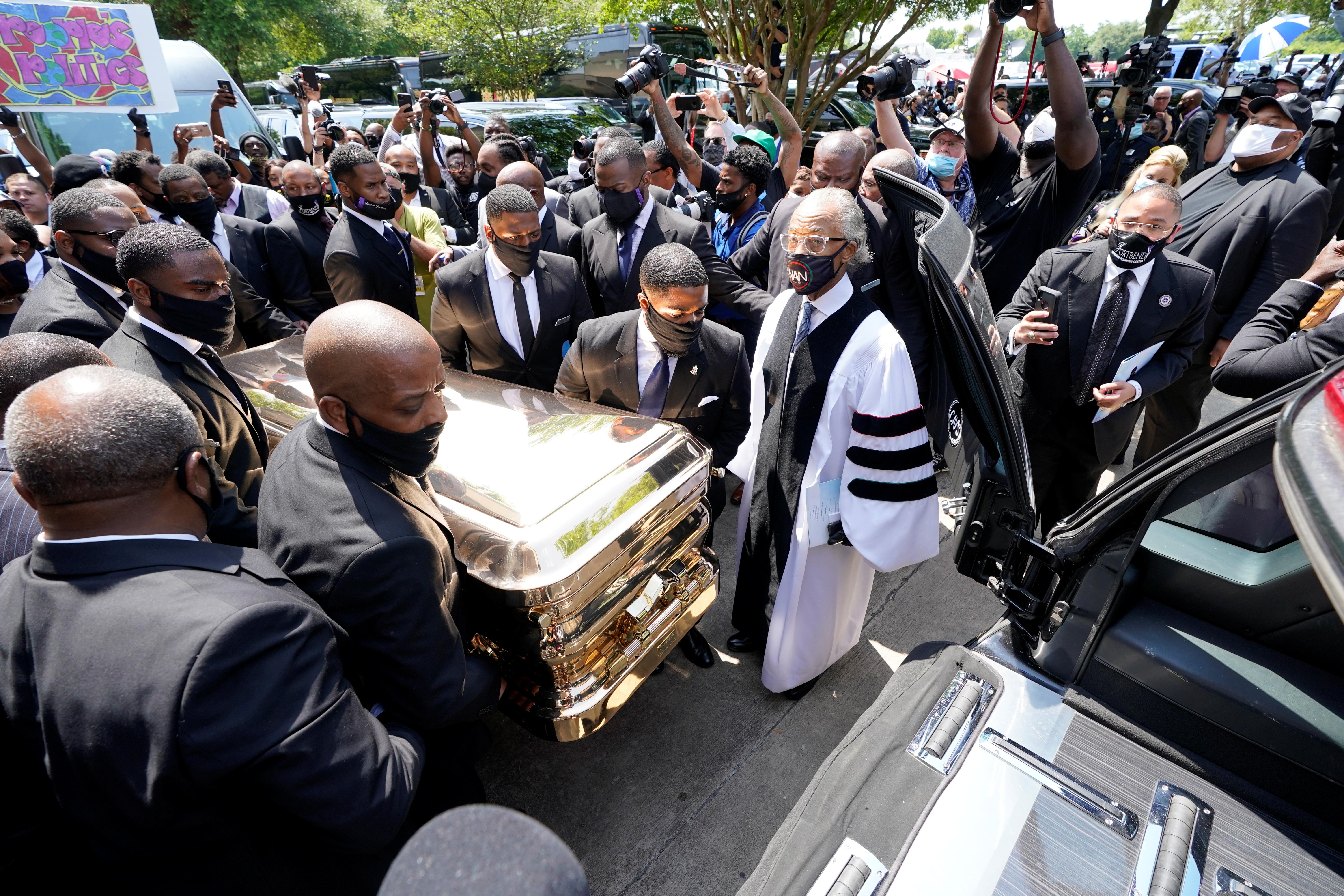 American flags lined the streets outside the church. Flowers and bouquets were placed around a photograph of Floyd.

Houston Mayor Sylvester Turner thanked the Floyd family “for seeking justice for George while at the same time asking people all around the world to do it respectfully and peacefully.”

“Why in this nation do too many black Americans wake up knowing that they could lose their life in the course of just living their life?” Biden said. “We must not turn away. We cannot leave this moment thinking we can once again turn away from racism.”

Family members of other black men who died in confrontations with white men attended. 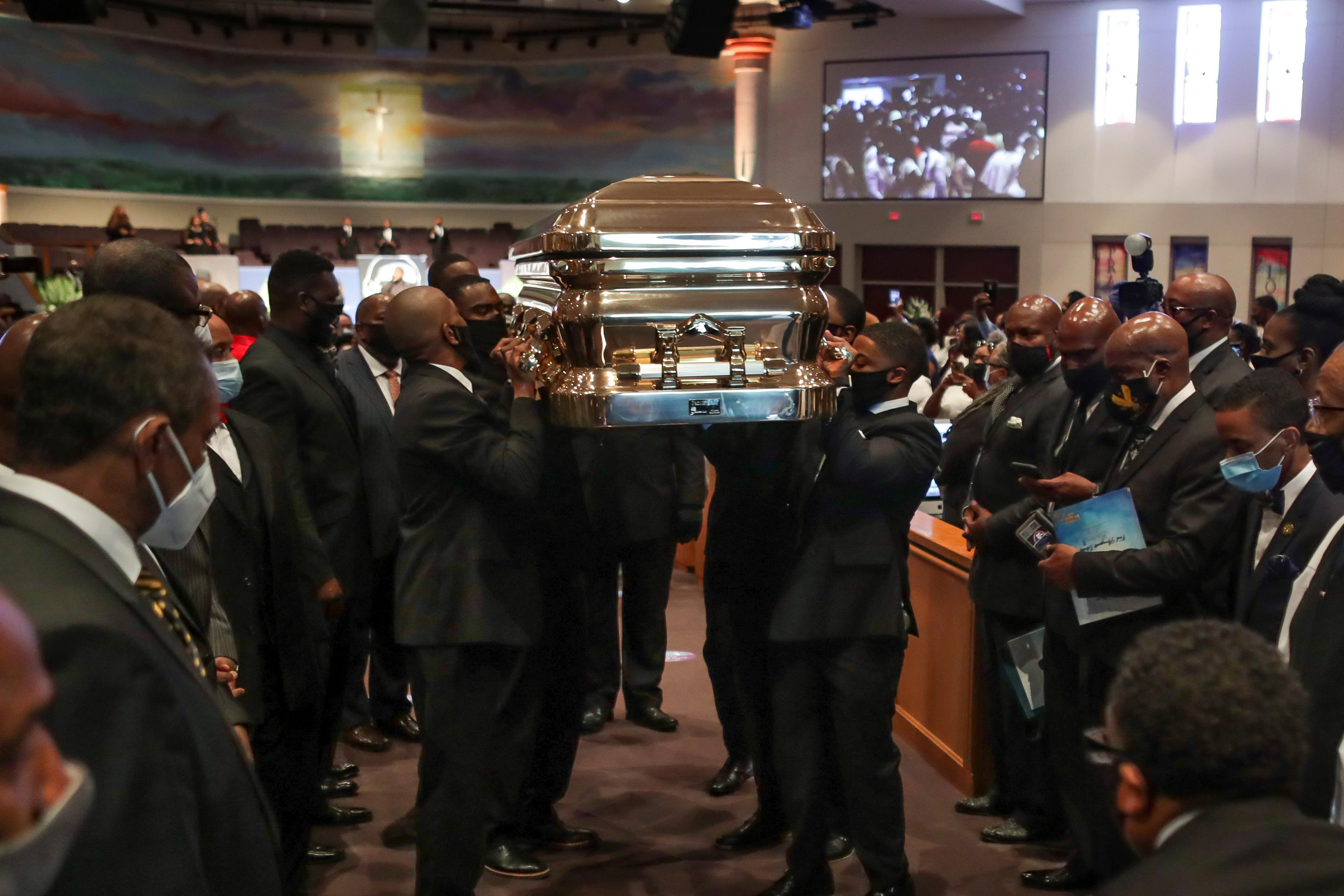 The mother of Eric Garner, the New York man who died in a police chokehold, was at the church as was the family of Ahmaud Arbery, a 25-year-old Georgia man who was shot and killed in February while jogging. Three white men were charged.

Floyd’s death ignited a wave of protests across the United States and cities in other countries against racism and the systematic mistreatment of black people, reinvigorating the Black Lives Matter movement.

The case also thrust the administration of President Donald Trump into a political crisis. A Republican, Trump repeatedly threatened to order the military on to the streets to quell protests, which have mostly been peaceful.

Trump has resisted calls by activists and some politicians to slash police budgets and redirect the money, saying 99% of police were “great, great people”. Biden has said he does not support moves to “defund the police.”