Addressing MEPs in the European Parliament on Wednesday, the Belgian politician said he would not intervene on matters between the EU and the UK but moved onto say he was “optimistic” about a Brexit deal being reached by the end of the year. In a bizarre football analogy, Mr Verhofstadt said: “First of all, I don’t want to intervene on Brexit.

“I think we are in injury time, like we say in football, in these negotiations.

“But I’m still optimistic because I think that this is not like football.

“Footballers are tired in injury time.

“Politicians are not. They are at their best in injury time.

“And I hope and I’m still optimistic because it’s in the interest of both to have this agreement.” 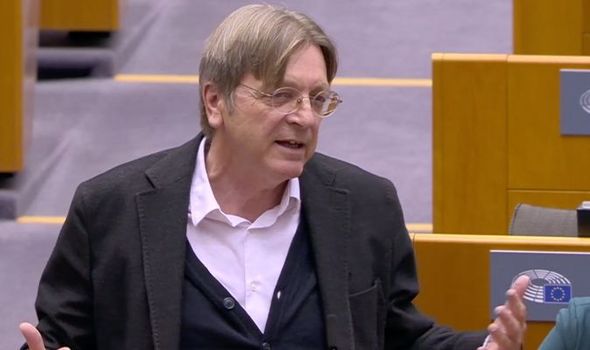 Opening the plenary session, European Commission President Ursula von der Leyen told the European Parliament these are “decisive days” for negotiations with the UK on a post-Brexit trade agreement, adding: “I cannot tell you today if, in the end, there will be a deal.”

She said the bloc is “ready to be creative” to resolve the major issues of fisheries policy, governance of any deal and measures to prevent unfair competition between the UK and EU, “but we are not ready to put into question the integrity of the single market, the main safeguard for European prosperity and wealth”.

She said: “These are decisive days for our negotiations with the United Kingdom. But, frankly I cannot tell you today if, in the end, there will be a deal.”

“There are still three issues that can make the difference between deal and no deal,” she added.

“The crucial topics for the European side are, of course, questions linked to the level playing field, governance and fisheries.

“With very little time ahead of us, we will do all in our power to reach an agreement, we’re ready to be creative.”

She added: “One thing is clear: whatever the outcome, there has to be and there will be a clear difference between being a full member of the European Union and just being a valued partner.”

Negotiations are continuing, but a deal needs to be concluded in time for it to be ratified before the transition period expires at the end of the year.

Oh dear, Angela! Merkel’s Covid strategy dismantled by her OWN aide: ‘The race is lost’