IRVINE, Calif. — The hundred-odd students who gathered on the hilltop campus of Concordia University here on a sunny Thursday morning had a lot of questions for Representative Katie Porter on abortion, immigration, voting rights and the 2020 primary races.

But as their fluorescent question cards were plucked one by one from a raffle drum, not one mentioned the topic burning up Washington: the report of Robert S. Mueller III.

The voters in Miami who came out early Wednesday to see a freshman Democrat, Representative Debbie Mucarsel-Powell, at Flava’s restaurant lobbed only a single question about it amid queries about clean drinking water and fresh produce. When Representative Mike Levin, another freshman Democrat, faced his constituents in the beach town of Carlsbad, Calif., he found himself politely disagreeing with those who worried that a possible impeachment could jeopardize Democrats’ chances in 2020.

And in South Philadelphia, “Medicare for all,” not President Trump, was the hot topic Wednesday night when four House Democrats answered constituents’ questions at Tindley Temple United Methodist Church.

“I believe that Congress should not pursue impeachment, and I say this as someone who deeply loathes the president and absolutely believes he has committed high crimes and misdemeanors,” Joshua Thaler, 45, said as he ducked out of the forum. “It keeps the conversation on Trump rather than on our agenda.”

As House Democrats return this week to Washington after a two-week recess, they will find a Capitol consumed by the report of Mr. Mueller, the special counsel. A private meeting of the House Democratic caucus on Tuesday promises to be heated, as do Senate and House hearings on Wednesday and Thursday with Attorney General William P. Barr.

But rank-and-file Democrats are not being propelled by their constituents into a headlong confrontation over impeaching the president. In town hall-style meetings and meet-and-greets across the country last week, constituents bemoaned Mr. Trump’s policies, groaned at his refusal to heed congressional subpoenas and fretted over what they saw as an erosion of the rule of law.

There were few signs of an uprising to demand a quick judgment that the misdeeds laid out in the special counsel’s report constituted the kinds of “high crimes and misdemeanors” worthy of trying to remove the president from office. 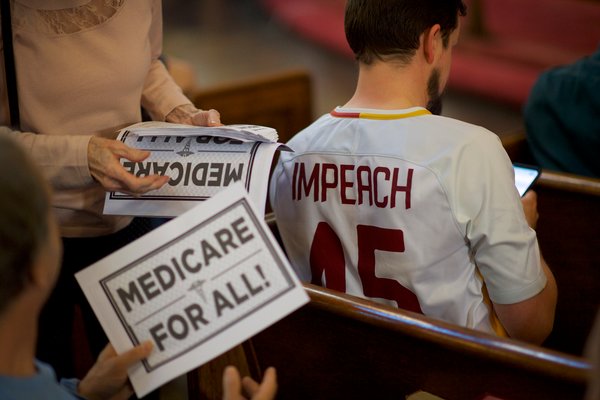 “It’s not a top half-dozen. It may be down at the No. 12 spot” in terms of priorities, said Ms. Porter, a freshman Democrat of California, who hears far more from her Orange County constituents that dissatisfaction with Mr. Trump should be channeled into voting him out of office in 2020.

A Washington Post-ABC News poll released on Friday appeared to underscore Democrats’ dilemma. It found that roughly six in 10 Democrats supported beginning impeachment proceedings against Mr. Trump, most of them strongly. But almost nine in 10 Republicans and six in 10 independents, whom Democrats need to defeat Mr. Trump, opposed the idea.

Democratic leaders in the House have pledged a series of hearings intended to ferret out the details of Mr. Mueller’s investigation and air the testimony of key witnesses. Rather than jump to conclusions — and there are some liberal lawmakers arguing in favor of prompt impeachment — party leaders say they want to build a case on live television before the public and see where that leads.

“We are going to do our work, but we’re not going to do it haphazardly,” Representative James E. Clyburn of South Carolina, the No. 3 Democrat in the House, said Sunday on the ABC program “This Week.”

He added, “Timing is everything in this business, and it’s one thing to run down a road toward impeachment; it’s something else to lay a foundation, gather the facts, educate the American people to see what needs to be done and when we should do it.”

For now, at least, the lack of pressure in districts that helped deliver Democrats their majority and united Republican support for Mr. Trump could help shape the road forward. Impeachment, Speaker Nancy Pelosi said last week at a Time magazine event, is “one of the most divisive paths we could go down in our country, but if the path of fact-finding takes us there, we have no choice.”

It is not that Democratic voters are counseling kindness. In Flava’s in Miami, the iconic restaurant’s owner, Wilbur Bell, agonized to Ms. Mucarsel-Powell that House Democrats were standing idly by while the president “disrespects their summons and subpoenas.”

“Someone has got to take a stand,” Mr. Bell said. But in an interview afterward, he added that impeachment would be a mistake.

Mr. Trump’s attempts to thwart Mr. Mueller’s investigators and Congress were “not right,” Mr. Bell said, but he said of the president, “He likes a fight, so if you try to fight him, you’re playing in his field.”

Ms. Mucarsel-Powell, who sits on the Judiciary Committee, said there was room to fight anyway but stressed the importance of first educating voters. Not only are most Americans unfamiliar with the contents of the Mueller report, she said, but also “they don’t care, and this is the truth.”

“They’re working 60 hours a week just trying to feed their family,” she said.

At another town hall-style meeting across town, constituents of Representative Donna E. Shalala, the House’s oldest freshman, who served as the secretary of health and human services under President Bill Clinton, lobbed question after question about health care.

About the report, she said she heard “Zip!” — holding her hand up in a zero. Her office received 10 phone calls the day Mr. Mueller’s report was released, divided evenly between calls for impeachment and requests for hearings. Since then, the phones have been quiet, she said.

In Carlsbad, where dozens of people gathered at a senior center on Wednesday evening, there were more questions about the removal of radioactive waste from a decommissioned nuclear plant up the coast than the removal of the president. Mr. Levin brought up the Mueller report in his opening remarks, stating to applause that he believed Mr. Trump had obstructed justice.

But the only questioner who mentioned impeachment outright told Mr. Levin she was worried that a drive to oust the president would backfire and allow Mr. Trump to play the victim in the 2020 presidential election.

“He will rally his base, and we won’t have an opportunity for our candidates to talk about the issues because all the air will be sucked out and focused on him once again,” she said.

Mr. Levin, who faces an easier path to re-election than Ms. Porter and other new members, disagreed, saying his loyalty was to the country first and not just to his party.

“I swore an oath to the Constitution,” Mr. Levin said, “not to protect and defend the Democratic Party.”

Besides, he argued, voters were sophisticated enough to take into consideration the totality of Mr. Trump’s presidency and Democratic challengers’ platforms.

Political concerns were at the front of constituents’ minds in Philadelphia, as well, where many of the Democratic representatives in the greater area — Madeleine Dean, Mary Gay Scanlon, Chrissy Houlahan and Brendan F. Boyle — fielded questions from a moderator from the liberal activist group Indivisible, which convened the forum.

Mr. Thaler, who attended the event, said he believes Hillary Clinton lost in 2016 in part because she focused more on Mr. Trump than on issues that voters cared about. “I think that we’re primed to make that mistake again,” he said.

Peggy Bradin Wilson, 66, a retired federal employee and a leader of Indivisible in Delaware County, Pa., shared that concern, saying that impeachment proceedings could “inflame his base and bite us in the end.”

“I think it’s a distraction,” she said, adding that impeachment would “take the focus off the issues Congress needs to be dealing with, like health care, living wages, getting drug prices under control and the Green New Deal.”

But her fellow Indivisible leader, Karal Taylor, 74, a retired English and social justice teacher, disagreed — even as she conceded it would be nearly impossible to oust Mr. Trump with a Republican-led Senate.

“I believe we can do more than one thing at a time,” she said, adding: “I’m sort of an idealist. The process should go forward. He has to be held accountable even if the conclusion is foregone.”

Lawmakers in more Republican areas, who will appear next year on the ballot alongside Mr. Trump for the first time, appeared skittish.

Outside Charleston, S.C., where liberal politics are still mostly an aberration, Representative Joe Cunningham, whose victory in 2018 was one of the biggest Democratic upsets, comfortably fielded questions at a Tuesday gathering on infrastructure and money in politics. But when he was asked point-blank whether he would support impeachment, he tried hard to slam the door.

“We need to take a deep breath, ascertain all the facts and make our decision based upon facts and not emotion,” Mr. Cunningham said. “I know there are certain factions of my party that have introduced articles of impeachment, and I would say to certain members in our caucus that if they are trying to short-circuit President Trump’s time in office, that recourse is at the ballot box.”